– nine scrolls dating back 2,000 years containing Biblical text which were found in the Qumran caves, the famous caves that yielded the Dead Sea Scrolls over seven decades ago. The scrolls were found hidden inside three leather phylacteries, pouches traditionally carried by observant Jewish men. According to reports, the leather pouches were first pulled out of the Qumran caves in the 1950s, but were never examined or analysed until Yonatan Adler, an archaeologist from Ariel University, was working on materials from the old archaeological excavations and found the phylacteries. Using latest technology, including multispectral imaging carried out by the Israel Antiquities Authority (IAA), it is now possible to view the text on the ancient scrolls. 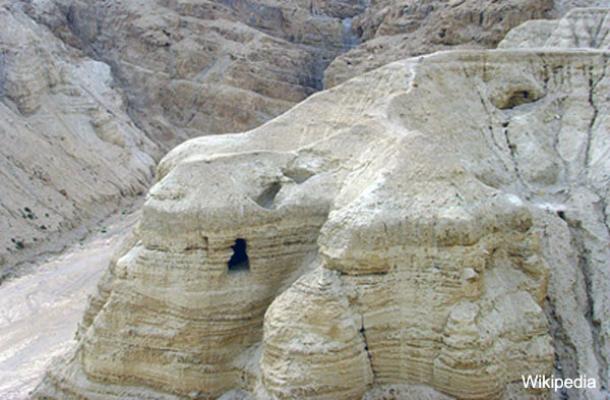 The Dead Sea Scrolls have been the centre of controversy for a long time:

The ancient and priceless texts have been dubbed "the academic scandal of the 20th century" because of the long delay in publication, which many have claimed is due to the controversial nature of its contents. The manuscripts shed unprecedented light on Judaism around the turn of the era, at the time when Christianity was born, and some of the contents conflict with the accounts contained in the New Testament. Only 20% of the texts were published upon their discovery; the other 80% remained locked away in a secret vault at the Rockefeller Museum in Jerusalem for about 35 years, causing fury among archaeologists.

The nine ‘newly found’ documents are from caves 4 and 5 and were excavated in 1952 by the archaeologist Roland de Vaux. Considering the academic scandal concerning the Dead Sea Scrolls, one has to wonder if they really have just been rediscovered or whether they too have been protected and hidden away. The content of the text has not yet been released. 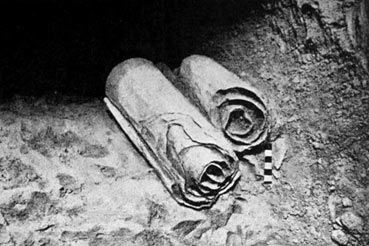 Either way, they have now been 'discovered' and it will be fascinating to discover the 2000 year old messages they contain.

Vasa Croe
+12 more
posted on Mar, 6 2014 @ 08:15 AM
link
Wonder if the text will actually be released. We all know we can't have anything floating around that would make Christians look silly now don't we.

70 years in their possession, taken from one of the most historically important religious archaelogical sites in the region, after they had found the DSS...and they've only just got around to examining them after seven decades?

Or, they're the most incompetent religious historians and archaeologists on planet Earth.
edit on 6-3-2014 by MysterX because: typo

posted on Mar, 6 2014 @ 08:24 AM
link
I think it is amazing that so much history was found, but I am so sick of the cover up and secrecy. Why not just release all of it? because it doesn't fit you "ideology"? Big flipping deal.


Quite.
And what on earth is this?:


the other 80% remained locked away in a secret vault at the Rockefeller Museum in Jerusalem for about 35 years, causing fury among archaeologists.

Not so much incompetent archaeologists, as unable to access information.

Vasa Croe
Wonder if the text will actually be released. We all know we can't have anything floating around that would make Christians look silly now don't we.

posted on Mar, 6 2014 @ 08:34 AM
link
What a fascinating find. A shame these texts been suppressed for so long. As a Christian Historian, I'll be looking forward to the release of these new insights.

Thank you for bringing this discovery to light.

Vasa Croe
Wonder if the text will actually be released. We all know we can't have anything floating around that would make Christians look silly now don't we.

other than making money off of Christians, Israel is not all that Christian friendly.
sure they tolerate them, take their money, and the government may say they are, but most of the population can't stand Christians.


Israel Really Isn't All That Friendly to Its Christians

just one opinion from a google search, and if you do a video search you see more.

How did the Rockerfellers come to have them....


Read the Talmud and you'll know why some don't like Christians. Or anyone else. I've never been to Israel, but I want to think the average Israeli is kind.
I want to know what these tablets say from MULTIPLE sources please!!

edit on 3 6 2014 by JohnTheSmith because: Grammar and opinion.

posted on Mar, 6 2014 @ 08:47 AM
link
If the writings shed a bad light on Christianity & Judaism.....no, we will never know what the works contain. They will pick thru the writings and publish what supports their beleif's. IMHO, they are real, they contain facts that lend credence to the fact that Jesus was just a man like me & you. If that's the case....we will never know.Period.


Vasa Croe
Wonder if the text will actually be released. We all know we can't have anything floating around that would make Christians look silly now don't we.

andy1972
How did the Rockerfellers come to have them....

Now this is a real damn good question!


Vasa Croe
Wonder if the text will actually be released. We all know we can't have anything floating around that would make Christians look silly now don't we.

the bible is two books in one.

old testament is the torah and other Jewish writings before Jesus, the new testament is about Jesus's time. all of Jesus disciples were jews preaching to jews saw themselves as jews. it was paul, who was a pharisees that converted and not one of the 12 after fussing with the 11 that were left that went to the gentiles.

it is thought that the essenes wrote the dead sea scrolls, thought to be a strict, ritualistic, ie observed certain practices jewish sect.


Essenes
The Essenes (in Modern but not in Ancient Hebrew: אִסִּיִים, Isiyim; Greek: Εσσήνοι, Εσσαίοι, or Οσσαίοι, Essḗnoi, Essaíoi, Ossaíoi) were a sect of Second Temple Judaism that flourished from the 2nd century BCE to the 1st century CE which some scholars claim seceded from the Zadokite priests.[1] Being much fewer in number than the Pharisees and the Sadducees (the other two major sects at the time), the Essenes lived in various cities but congregated in communal life dedicated to asceticism (some groups practiced celibacy), voluntary poverty, and daily immersion. Many separate but related religious groups of that era shared similar mystic, eschatological, messianic, and ascetic beliefs. These groups are collectively referred to by various scholars as the "Essenes." Josephus records that Essenes existed in large numbers, and thousands lived throughout Roman Judæa.

there was a pretty good documentary about them on the history channel way back before the split to history an H2 i'll see if i can find it.


TPTB don't want the info released that would jeopardize their Money and Power, that they have gained by usurpation, back into the hands of those who would use the info contained, to realize and begin to start using those powers given to them by divine right. They know that once the true heirs understand the latent power that the rightful heirs have that their day is done.

It seems pretty clear that the Rockefellers can do whatever they like; so it doesn't surprise me that they've been "locked away."

Now the world will have to wait for 'decoding' the mystery - and that means it will be a "translation" thing from the get-go...very easy for apologists to simply dismiss whatever they prefer not to accept. But, my question is, why would they not WANT to learn that their beliefs are either backed up, or not? Don't they have the integrity to admit they've maybe been misled? It certainly doesn't have to make them "look bad" for believing prior mistakes, at least imo.

I don't understand why new "religious information" makes some people so nervous. I think it's exciting.
I always wanted to be an anthropologist/archaeologist - but my career steered me a different direction academically.

posted on Mar, 6 2014 @ 10:32 AM
link
the unwashed masses only need to know what they have been told...
the banker trusts and secret societies that go back to babylon know that a large history preceeds them they know symbols things like the cross are not what they tell the sheeps
www.viewzone.com...
so many of the stories and personages in judeo/christianity turn out to be rippid off from earlier people's or just non existant, that I would bet that the money that created Israel doesn't want the peeps to see the little troll behind the curtain has no clothes...

and after they got all that free money from the peeps.....and they are not the master race after all
ooooohhh, look out mama