Ever wonder what's flying over your head? BookMark this:


Hello all, been lurking around here for a while. Decided to (finally) sign up in response to some recent findings on planefinder.net

Looking back through the past 2 weeks so far, I've tracked 3 different RC-135's on almost nightly flights above NE Texas/SE Oklahoma. They fly back and forth in a straight line roughly 30-50 miles long, for many hours at a time. They usually begin flight between 23:00 and 0:30

My interest was first piqued after noticing a strange flight number, squawking a transponder code that, according to Wikipedia: "May be used by DOD aircraft beyond radar coverage but inside US controlled airspace with coordination as appropriate with applicable Area Operations Directorate (USA)"

Searching it's tail number (as displayed on planefinder.net) revealed it as an RC-135V/W Rivet Joint. "All Rivet Joint airframe and mission systems modifications are performed by L-3 Communications in Greenville, Texas, under the oversight of the Air Force Materiel Command." -Wikipedia

Well, Greenville is where it appears to have taken off from, so that one didn't strike me as odd as the other two.

Looking back through previous days, I've found 2 more RC-135U "Combat Sent" seeming to cover roughly the same area. Unique tail numbers and on-screen callsigns on each. (Somewhat more "ominous" callsigns at that. Is it against T&C's to post tail numbers and/or callsigns?)

Are USAF Recon aircraft flown over US soil regularly, or is this an anomaly?


As long as it isn't classified you can post it. In this case it's safe.

All military aircraft perform training flights over the US, as well as post maintenance check flights.


I live about 40 miles north of Sheppard AFB, home of the 82nd Training Wing. As a kid back in the 90's I could've lay out in a field and watched the T37's and T38's "dog-fighting" all day, so I'm no stranger to military craft in the skies.

I guess in light of the surveillance revelations and researching these aircraft's SIGINT capabilities, the patterns struck me as odd.

After watching more closely, the COBRA aircraft seem to appear on the map from Northern Kansas, proceed to cover a strip of approx 150 miles from Hugo, OK to Marshall, TX, reversing course to cover the same strip for approx. 4 hours, before returning north to Kansas.

SAME 40 also covers the same area, but appears to originate from within Texas.


That's consistent with a post maintenance flight. An FCF (Functional Check Flight) consists of everything from slow flight, to shutting engines down and restarting them. The RC-135 depot facility where major maintenance takes place in Oklahoma.

Also I noticed on flightradar 24 while looking at London gatwick airport. Flight radar actually picked up ground based vehicle such as fire tender units. I took screen shots on my phone as I found it a bit odd. Also the London metropolitan police helicopter popped up to. I was trying to organise a thread like this with another member of ats regarding the tracking of aircraft and odd routes some planes make.


The reason that the fire truck appeared on flightradar 24 is that it was carrying a transponder. Traditional RADAR (Radio Aid (for determining) Direction AND RANGE) sends a radio wave out which then bounces back to the transmitter/receiver and allows the operator or computer to work out the distance, speed and direction of travel of an object. The problem is that when you try to use RADAR on the ground you just receive a load of clutter that is impossible to analyze. This is because the radio waves are bouncing of everything including the hard concrete surface of the airfield. To get around this problem ground control in an airport don't use traditional RADAR they use a system that the military call IFF (identification Friend or Foe) I'm not sure what the civilian sector calls this. Basically IFF is a passive RADAR system that interrogates transponders who in turn "Squawk" a code that identifies them to the operator. Each aircraft and vehicle operating on the airfield has their own unique code that they transmit when interrogated, this allows the ground control team to monitor all movements on the ground where traditional RADAR would be impractical. Sometimes the ground vehicles don't get filtered out of the system by the computers and show up on the air RADAR computer monitoring systems (where no physical RADAR or transponder is connected to the system, it is all purely computer led i.e flightradar 24)

kosmicjack
Yeah, call me crazy but there is just no way all of that air traffic isn't doing ..something.

I remember reading an article a while back about environmental pollutants, what shocked me was the prevalence of trace amounts of jet fuel in everything, even breast milk. Now I can wee why.

After the air strikes of 9/11, all aircraft were required to land at the nearest airport. This gave meteorologists the one chance to see what effect all those contrails had on global weather patterns. All the light reflected from those contrails, disruptions to cloud patterns, amounted to 1.5% of the total amount received from the Sun. That was enough to cool down the climate by a corresponding amount.


Ah, thanks for the clarification. I've noticed you are by far one the most knowledgeable contributors in regards to military aviation on ATS, Zap. I'm sure all those high-hour airframes need all the maintenance they can get.


There are two levels of major maintenance. Phase is the unit level. They remove the engines, specific panels, touch up paint, etc. They can go through it a couple times a year depending on location and airframe.

Every four or five years or so they go for PDM at the depot. This includes removing the wings and tail, as well as reskinning the aircraft. Depending on the number of aircraft in the unit you may see one plane in PDM at all times.

PDM is what happens in Oklahoma.


Not sure about FR24 as I've never used it, but planefinder.net works through an open-source network of ADS-B receivers. The majority of US aircraft will be required to have ADS-B out capability by the end of the decade, though Europe has a decent head start in implementing it.

"ADS-B Out" periodically broadcasts information about each aircraft, such as identification, current position, altitude, and velocity, through an onboard transmitter. ADS-B Out provides air traffic controllers with real-time position information that is, in most cases, more accurate than the information available with current radar-based systems. With more accurate information, ATC will be able to position and separate aircraft with improved precision and timing.[7] "ADS-B In" is the reception by aircraft of FIS-B and TIS-B data and other ADS-B data such as direct communication from nearby aircraft

en.wikipedia.org...
edit on 382014 by CloudsTasteMetallic because: misquoted original link

What do we owe big brother?


Posting classified information can get you and ATS in trouble. But be my guest and see how much trouble it causes you.

posted on Mar, 9 2014 @ 08:12 AM
link
Thanx for the link Canuck,
I used one similar to this last year that was in a thread here on ATS.
A flight "disappeared" from radar for a while and of course it was on here well before ANY MSM.
Thankfully, that flight did have a happy ending and landed safely.
I....uhm.....forgot to bookmark the other site......duh!
This one has been saved.
Cheers from here,
Aft

12voltz
its a swarm of wasps
like in that movie 'Killer bees" . this is from another app that i have been using for a while,good fun for planespotters or chemtrail researchers alike

and a zoomed in shot of U.S 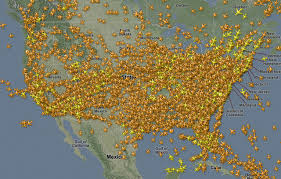 Nah.. go in close and you see each plane is seperated by the minium requirements
edit on 6-3-2014 by 12voltz because: (no reason given)

I hope everyone knows that if the planes were to scale with these maps, the dots they represent, would be so small that they nobody would be able to see them, not even on a full screen map, with a magnifying glass. it would take many of them just to make up one pixel
edit on 9-3-2014 by jimmyx because: (no reason given)

posted on Mar, 9 2014 @ 09:06 AM
link
Ive always wanted something like this for when i see a weird plane going overhead,thanks for sharing

posted on Mar, 9 2014 @ 10:33 AM
link
Take a look at this flight pattern project done by Aaron Koblin. I really enjoyed watching this !

posted on Mar, 9 2014 @ 01:33 PM
link
is there a reason there are so few aircraft over Africa, Mongolia China etc?
Is it because there flight information is not public or they really just don't have that many airplanes flying over them?


These websites rely on people setting up an ADS-b receiver and uploading it. Areas with little or no coverage are areas with less net access.