1 in 10 Americans think HTML is an STD, study finds


Rotfl, you win the interwebs, buddy. Https must be Andromeda strain, lol

I can understand if the older generations don't understand some of the technical lingo. My mom certainly doesn't (I can't tell you how many times I've explained the difference between KB, MB, GB & TB because she can't remember which is which) She also used to think turning off the computer was a simple as yanking the plug from the wall, no shutdown needed (all knowledgeable folks can commence freaking out) And was very confused as to why 3.5 floppys can't fit in a disc drive.

Ha, think I caught a variant of that strain a long time ago.

Always seemed to me the younger folks had more difficulty with core technology than the older folks. Must be a hit or miss thing. As far as the CD-Rom drives I was on tech support back then and you would not believe how many people tried to cram a 5.25" floppy into the CD slot (before they had trays.)

Don't bother trying to explain TCP/IP to anyone though that's mostly a lost cause.


*blink*
I'm not even really sure what to say. Doesn't seem as bad as twenty-somethings not knowing who the VP of the USA is, but still...
Wow.

"In the age of information, ignorance is a choice."
...or so I've heard.

Bassago
As far as the CD-Rom drives I was on tech support back then and you would not believe how many people tried to cram a 5.25" floppy into the CD slot (before they had trays.)

I actually find that 1 out of 10 that doesn't know exactly what HTML stands for really isn't that bad considering that probably more than 1 out of 10 american could be considered quite stupid!


Somewhere in the middle of the video...
What is al quaida?
A guy answers "Al Qaida is a wing of the Masonic Order"


But in reference of the OP everywhere you ask questions in whatever country you will get crazy answers. It is just what humanity is. Sad to say but nothing new here.


The study was conducted by Vouchercloud.net, a coupons website, as a way to determine how knowledgeable users are when it comes to tech terms.

As bad as many self proclaimed experts are at college level statistics I guess I am not exactly sure that a coupon website has the expertise to conduct a scientific study (I mean everyone read the article and saw that, right?) Yes they had plenty of respondants, but if they only sample folks who go to Vouchercloud.net I don't think that is representative of all Americans.

posted on Mar, 5 2014 @ 02:53 AM
link
Dont feel bad, these kind of people exist and its not education or their fault. Its "unreachable knowledge" maybe due to their enviroment, similar to asking an Afrikaan - what is Lasagna?

However I found it frustrating when an IT officer complaining about the virus might infect through the computer ventilation holes. True story.

posted on Mar, 5 2014 @ 03:29 AM
link
Such a shame that the stupid people are so full of confidence, yet the intelligent ones are full of doubt.

What a monkey planet we live on as a result.

Now she is 87, ordering all her clothes an things online, she has a facebook account, plays games and googles everything she doesn't understand.

She has no higher education as she spent her youth in Japanese camps and right after that, married and got a bunch of kids.

But back to the topic, I think most people everywhere on earth are not very interested in computer language at all as long as they know how to work with one.


Not so terrible...I'm sure that a carpenter or electrician or teacher can throw out lot of words you do'nt recognize. I 'm a teacher and when talking with parents I need to be sure not to use "tech" words.


1 out of 3 Americans couldn't find The Ukraine on a friggin map. This is news??

Aint it near utah or something.. And utah is near New York right? Right past California.

1 out of 2 Americans couldn't tell you what the first ten amendments of the Bill of Rights happen to be.

Amendment 3: We do whats we want, get tf out of our.. I mean your house.

Amendment 4: We have the right to look through all you belongings and you can not do anything about it.. hell we can even look into your body for that matter and you cant say sh*t.

Amendment 5: we have the right to take your life even if you don't or haven't had a trial yet.

Amendment 8: Police have the right to beat, mace, pepper spray, use LRAD, and frame people just because we think its funny.

Amendment 9: You have no rights basically.

Amendment 10: Your state must follow your god(Government) For now and forever.

Tiny little study but funny just the same...so is this:

not to worry, thats just democracy getting spread


Well, from the lack of wit and simple grammar skills, it would appear you're in good company.

lol, its no secret round here that I'm dyslexic. Thankfully Dyslexia and intelligence are not connected, though i could understand why you wouldn't know that


Best one yet was a question she asked once about a Java update, "Java? Why does my computer need coffee?? Where do the grounds go?"

Okay... I've wondered for a long time if I'd come across something to beat the 'built in retractable cup holder on the front!'....and I'd almost given up. Asking where the coffee grounds go for Java puts the cherry on the cupcake. Indeed.

Thanks for a great laugh to start the day!

Skyfloating
@ the "oh Americans are so dumb" crowd: With the possible exceptions of high-education countries such as Finland and Japan, this kind of stupidity is not exclusive to America, its global.

I couldn't agree more. I think we're fixated and almost obsessed with showing our own level of pure 'Dumb' as evening entertainment on TV (It IS entertaining..) ...but it does always seem to be Americans being interviewed on American streets, huh?

I'd love to see some average and "common sense" questions on an average German, English, Japanese or Israeli street. I'll bet you're proven right and we find dumb is a universal constant in some key ways.


Give me your tired, your poor,
Your huddled masses yearning to breathe free,
The wretched refuse of your teeming shore.
Send these, the homeless, tempest-tost to me,
I lift my lamp beside the golden door!" 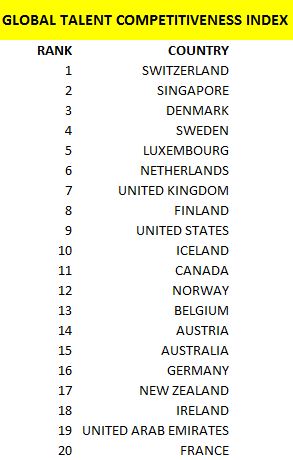 as to why everyone wants to assume americans are dumb...
its things like their score on guessing who has wmds and the world watching the NWO steal all of americans money while they go around spreading democracy...

eta
admittedly that pic is of stats referring to the top of the pile
at the bottom...more people, more dummies...also smaller countries lose talent to the bigger more opportunistic countries
edit on 5-3-2014 by Danbones because: (no reason given)


LOL you are referring to the black box theory. where you might not know what happens in that "box" and really don't care as long as it works.

but lets be honest about things, this "poll" is itself i would think something that was done JUST to try to make Americans" look like stupid neanderthals". now the only one I did not know was SEO, but then again i am of the beginnings of the "computer generation", a time where our teachers did not teach us how to use computers but WE taught the teachers, heck my school used MY SOFTWARE even, and it was only 3 or 4 of us that actually knew anything about computers, and did the "teaching" of their use. i know i am always correcting my father when it comes to computer terms and acronyms like HDMI when he gets them wrong. but in honesty WHY should he really know? as long as he can figure out what goes where (made easy by shapes), and can use it where is the problem?

lets just throw this out for fun. CARS and TRUCKS
what is the most effective brake system "disk brakes" or "drum brakes"? why?
how does a "seat-belt" work so that it easily pulls out but when you hit the brakes it locks up?
what does a carburetor do?
what is the difference between hydrologic brakes and air brakes? how do they work?
explain the "4 strokes" of a "4 stroke engine"?
how does a diesel engine ignite the fuel?
are "most" cars positive or negative ground?
what voltage is the standard CAR battery (newer cars)
why the heck would most people even CARE about these questions, if they don't work on their own or other people's vehicles?

now i am sure most would not even realize that the first question has a "technically correct" answer but in honesty that is based upon the fact that most people use a car being "dumb" (just not KNOWING) about it and thus is "safer" while the other if used correctly can actually be said to work better, but when used wrong in some circumstances IS DANGEROUS. but why would the average person know this information? heck some people can't even put air in there tires and have no clue how to check the oil, yet these people all drive around without worry. would it be fair to try to say that these people are lacking in education? and to then use that to "judge" how smart a country is?

I caught the HTML while online once, not naughty sites I swear.

I caught the HTML while online once, not naughty sites I swear.


Its mainly spread by the Packet Internet Groper (PING) and people probing back doors.