posted on Mar, 4 2014 @ 03:56 PM
link
Interesting results were discovered while researching a new technology that will aim to make the Internet more secure and anonymous/D centralized.

Page after Page of different Government, Defense, Intelligence agencies and contractors,CFR, policy makers and much more, all listed with absolutely nothing to do with what was intended from the original search.

Correlation comes in when you realize that the Tech under research here is made to give everyone a decentralized encrypted/secure way to communicate never seen before, in a way that is easy to use;SO THEY SAY! Never the less listed are those who would most likely appose this kind of technology because its designed to keep them out. Take a Look for Yourself, with Google. Very Interesting Indeed

United Nations Security Council
www.un.org/en/sc/
‎
Under the Charter, the Security Council has primary responsibility for the maintenance of international ... Latest News. 5 February 2014: Raimonda Murmokaité, Permanent Representative of Lithuania to the UN and President ... and maintained by the Web Services Section (DPI) and the Security Council Affairs Division (DPA).


One out of many, that were found to be particularly interesting is the, GMF: The German Marshall Fund of the United States
www.gmfus.org...

“ The German Marshall Fund of the United States (GMF) strengthens transatlantic cooperation on regional, national, and global challenges and opportunities in the spirit of the Marshall Plan.
GMF does this by supporting individuals and institutions working in the transatlantic sphere, by convening leaders and members of the policy and business communities, by contributing research and analysis on transatlantic topics, and by providing exchange opportunities to foster renewed commitment to the transatlantic relationship.

In addition, GMF supports a number of initiatives to strengthen democracies. Founded in 1972 as a non-partisan, non-profit organization through a gift from Germany as a permanent memorial to Marshall Plan assistance, GMF maintains a strong presence on both sides of the Atlantic. In addition to its headquarters in Washington, DC, GMF has offices in Berlin, Paris, Brussels, Belgrade, Ankara, Bucharest, Warsaw, and Tunis. “

This is just like the Trilateral Commission, and so on.
A lot of the most controversial organizations involved with conspiracies featured here on ATS are listed by typing the above string,....High Strangeness.

What was/is being researched and resulted in this discovery is a technology know as “D-Central” by John Mcafee, under a company he has created called “Future Tense”.

Please list anything you guy find here in this thread so we can get a view from many and see what exactly is going on here.

Also I do not claim this to be some special new conspiracy or what ever, just a very interesting real time example/observation...
Bye Now

Internet / Home - INTERPOL
www.interpol.int/
5 days ago - This is where you will find the latest news and multimedia from INTERPOL. ... represented by a National Central Bureau and committed on a daily basis to international ... LYON, France – Underlining Yemen's commitment to global security and ... This cutting-edge facility, due to open in Singapore in 2014, will equip the ...

This is from adding key word CIA to the search

Do you see the bold words in your matches? It is being smart.

I dunno, maybe world wide fish tanks are secrets too?

posted on Mar, 5 2014 @ 08:00 AM
link
The sites filtered by this search seem specifically and exclusively relevant to NWO interests. It is interesting that David Icke's site is among all these heavy duty think tanks, big gov, military and security complex. etc.
It seems a sort of filter for Global daily intelligence below Secret level.
It is furthermore interesting that ATS was allowed through the filter, though this thread particularly mentions the site itself...

Page after Page of different Government, Defense, Intelligence agencies and contractors,CFR, policy makers and much more, all listed with absolutely nothing to do with what was intended from the original search.

So it's searching for pages modified within the last 24 hours that contain ANY of the search words you entered. Is it surprising that a bunch of security related websites appear in the search results when you search for SECURE? Also, the 5th result is for The Daily Show with Jon Stewart - Political Comedy - Fake News ... 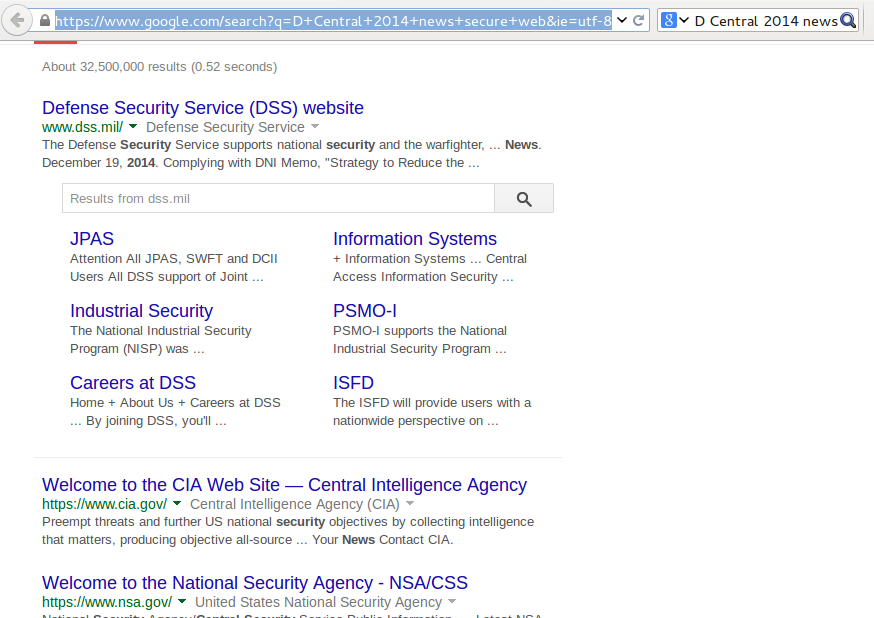 I predict there will be web pages containing any of the following words for quite some time.

They are common words.

I predict there will be web pages containing any of the following words for quite some time.

They are common words.


Yes but a search engine dose not interpret words the way you and I do; as if they were said allowed.

The output of the search engine when tasked with these words in this sequence (D Central 2014 news secure web) has anomalous output directly relating to the persons or agencies that would work to subvert a “Decentralized secure connection”; which is what this thread is all about. Not just the words.
Dose that make more sense?
Thanks for posting Ray