page: 1
20
log in
join
share:
IsaacKoi
+1 more
posted on Mar, 4 2014 @ 11:51 AM
link
I've uploaded searchable PDF copies of the US Government’s reports on Roswell to the links below, including the US Air Force’s 993 page report “Fact versus Fiction in the New Mexico Desert”, a 232 page US Air Force report entitled “The Roswell Report : Case Closed” and a 26 page General Accounting Office report.

The relevant links are given below.

As some of you will know, back in the 1990s, reports relating to the Roswell incident were released by the Air Force and the General Accounting Office detailing their investigations into that incident.

For anyone unfamiliar with these reports, a brief overview is given in a Wikipedia entry at the link below (the introduction to which is quoted for ease of reference): en.wikipedia.org...


The two Air Force reports on the Roswell UFO incident, published in 1994/5 and 1997, form the basis for much of the skeptical explanation for the 1947 incident, the purported recovery of aliens and their craft from the vicinity of Roswell, New Mexico. The first report, “The Roswell Report: Fact versus Fiction in the New Mexico Desert,” identified a secret military research program called Project Mogul as the source of the debris reported in 1947. The second report, "The RoswellReport: Case Closed” concluded that reports of alien recoveries were likely misidentified military programs or accidents.


For some more background, see:

Anyway, I've uploaded searchable PDF copies of those reports to the links below.

This US Air Force report contains a lot of documentation relating to “Project Mogul” balloons, said by the authors of that report to be the explanation for the debris found in 1947.

The "993 page report" includes the appendices, which some uncharitable souls might consider to include a lot of padding to bulk out the rather short actual report at the beginning of that massive document... 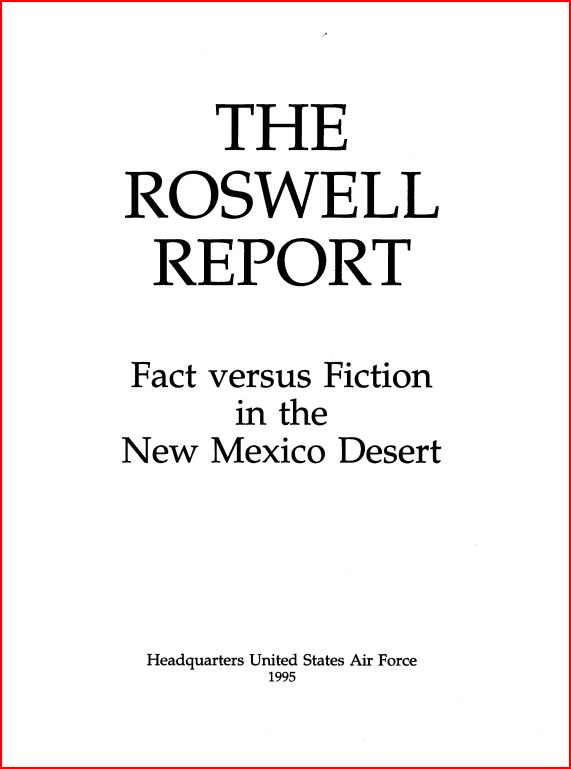 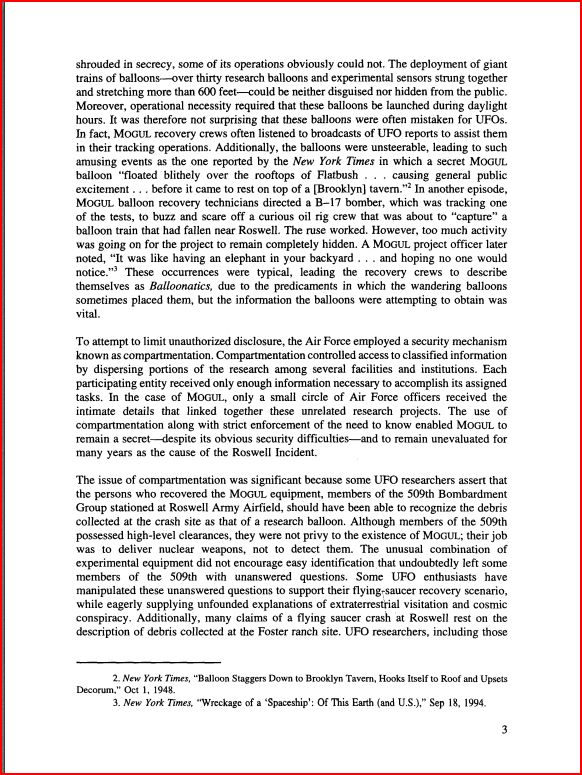 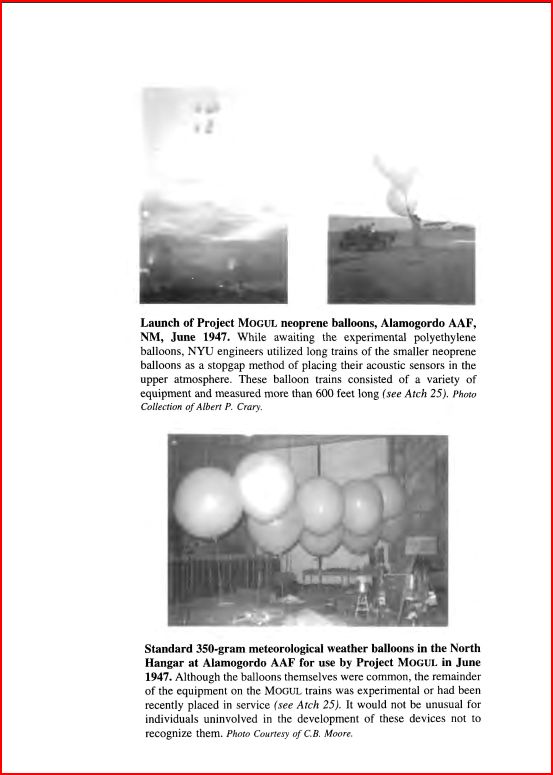 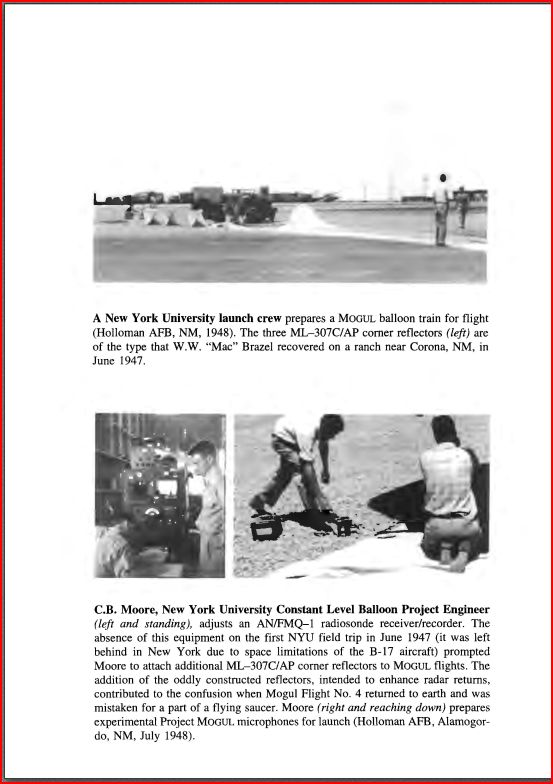 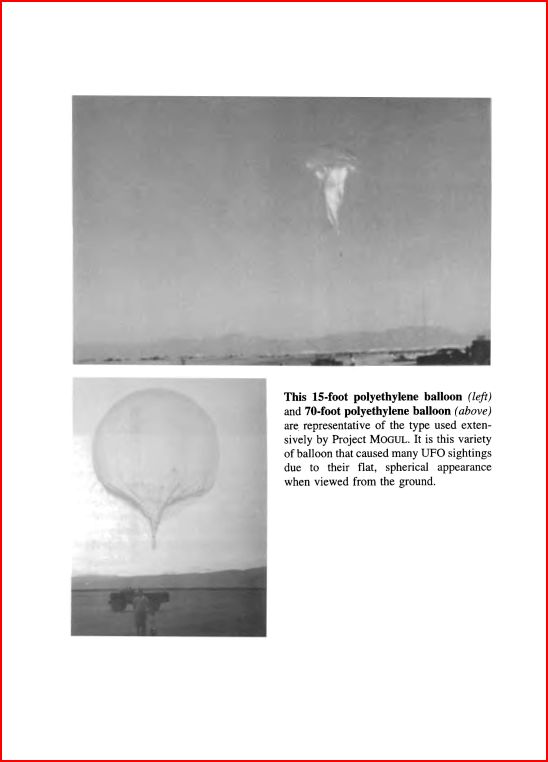 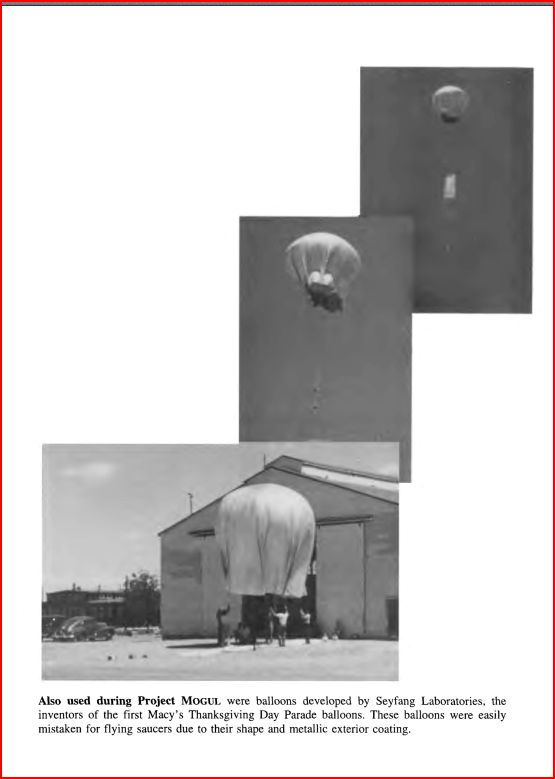 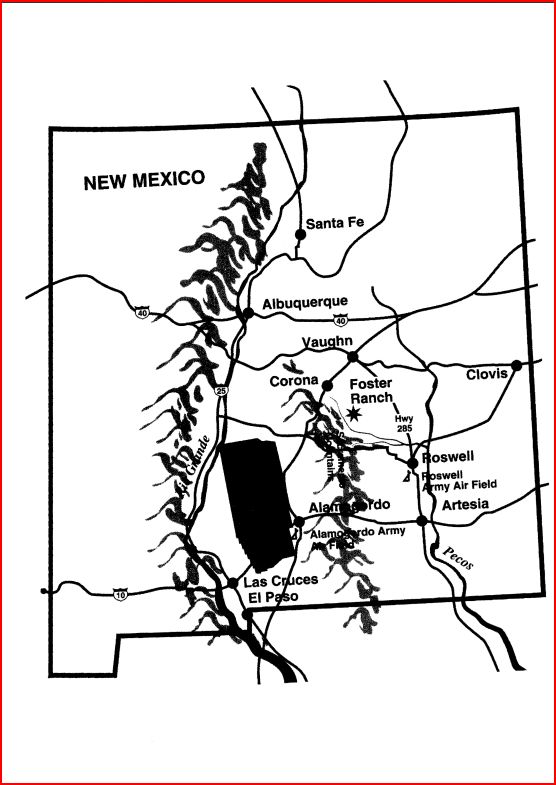 The explanation in this US Air Force report of witnesses claiming to have seen alien bodies were test dummies caused quite a furor at the time within ufology. Some enterprising ufologists sold T-shirts with slogans such as “I’m not a dummy”.  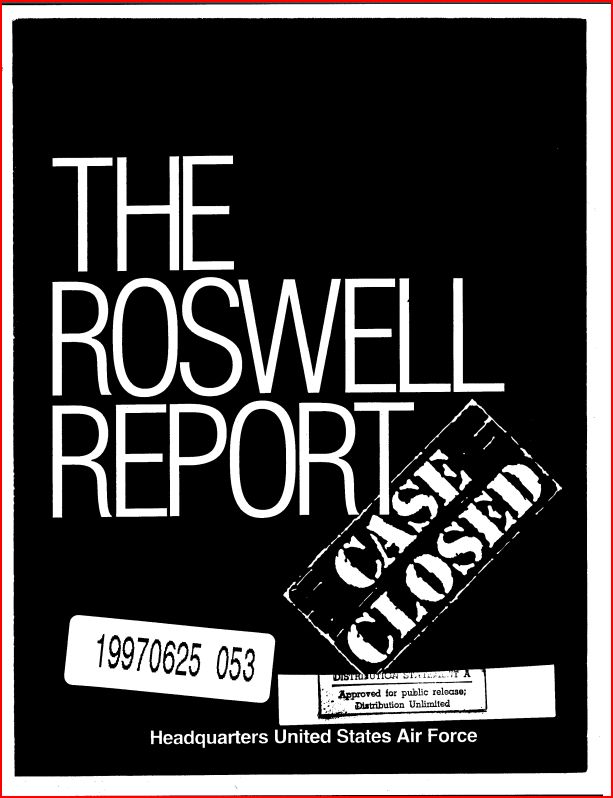 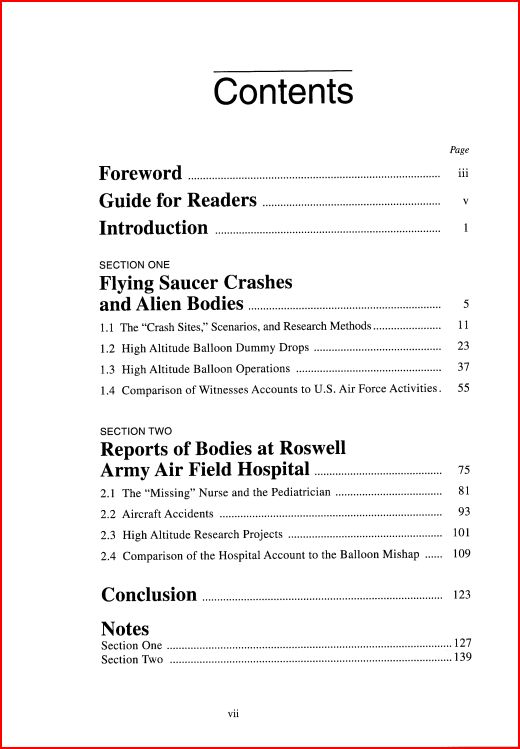 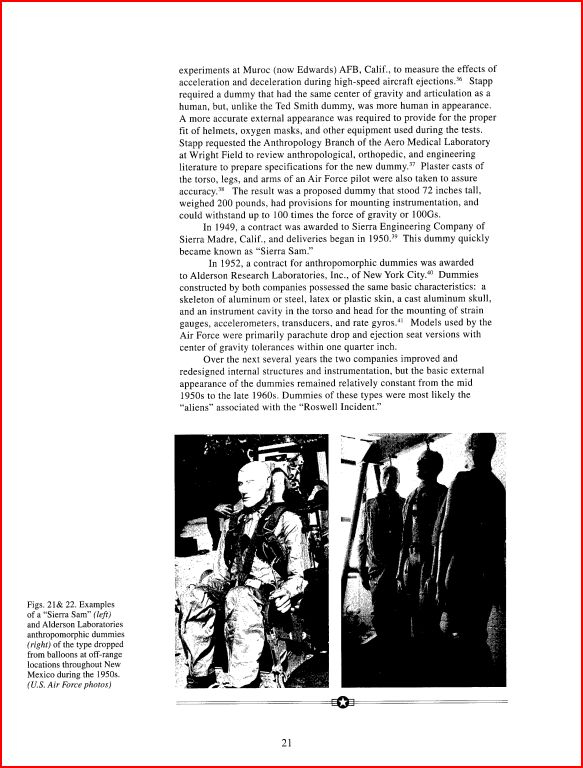 This report included the following (on page 2):


In our search for records concerning the Roswell crash, we learned that
some government records covering RAAF activities had been destroyed and
others had not. For example, RAAF administrative records (from Mar. 1945
through Dec. 1949) and RAAF outgoing messages (from Oct. 1946 through
Dec. 1949) were destroyed. The document disposition form does not
indicate what organization or person destroyed the records and when or
under what authority the records were destroyed. 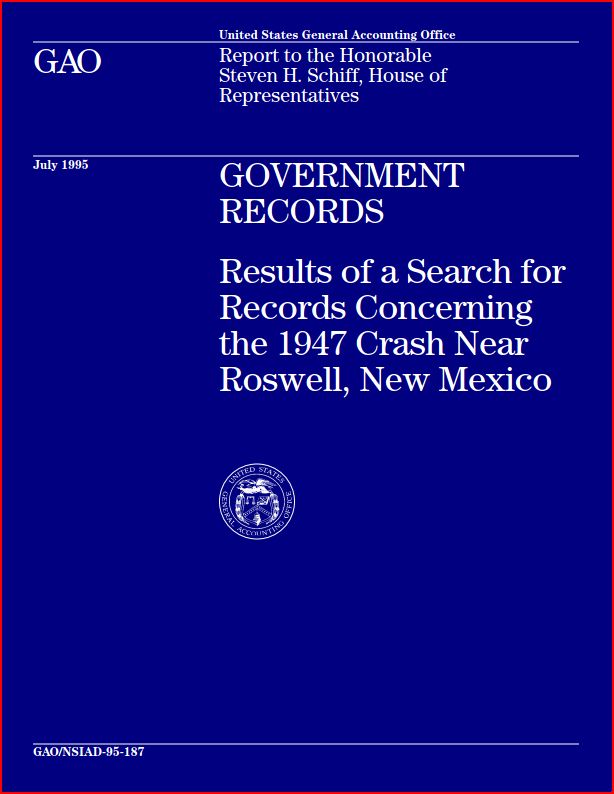 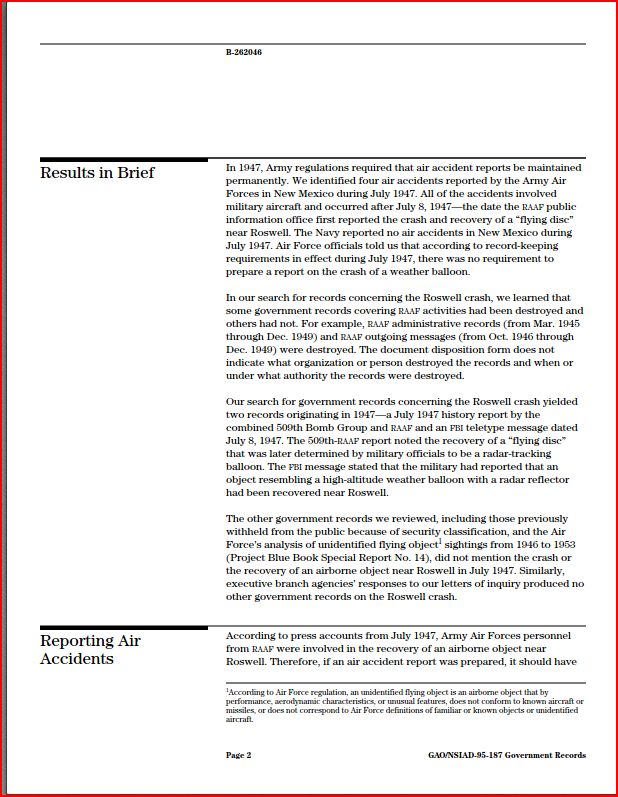 
By the way, back in the 1990s Clifford Stone wrote a document detailing his criticisms of the substantive part of the first of the above Air Force reports.

I've uploaded a searchable PDF copy of that document (with Clifford Stone's permission) to the link below:
app.box.com... 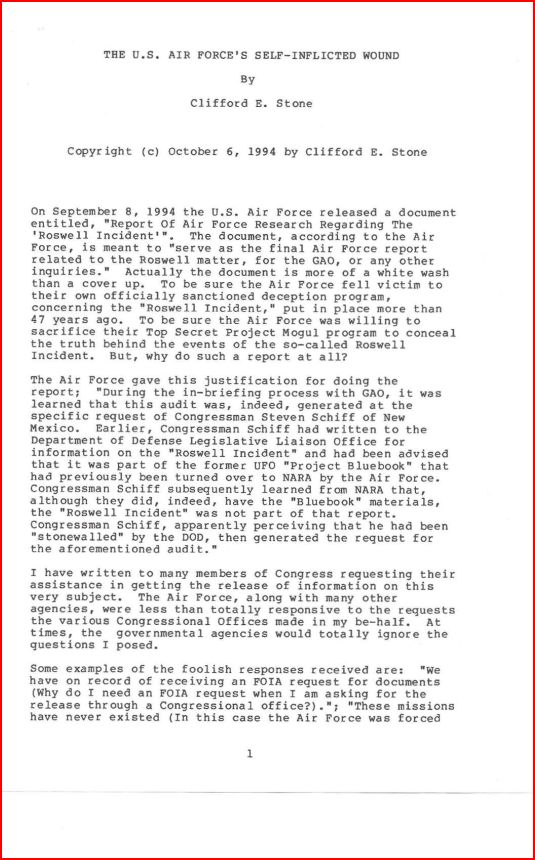 However I am convinced it was a balloon and there was a cover up but not of alien life.

the cover up was a downed secret test Aircraft with two pilots, whose aircraft was caught in one of these balloons and caused it to crash. causing the two sites both has removal of debris of metal but one had the pilots bodies removed. Now you just need to find out which pilots were declared to have died that week in 1947 during an Air force training ops. Thanks Isaac I did have some rather inferior copies of these pdfs. The text was blurrier and some of the pics were almost illegible.

They are a long read and have often been condemned as US government propaganda by many. But they are official historical documents and present the most information that the US military have ever said about the Roswell event(s) in print.

What is revealed is sometimes doubtful and sometimes convincing to explain why there was so much secrecy and why certain eyewitnesses believe they saw a crashed UFO or dead aliens. However the incident happened almost a lifetime ago now.

The story has continued to grow as have the possible explanations.

It is either a modern myth or one of the world's best (and yet also worst) kept secrets now.

All we really know is something fell to earth one hot July day in 1947.

mirageman
All we really know is something fell to earth one hot July day in 1947.

I'm not sure we can even say that much, particularly the incident occurring on a "July day" - hot or otherwise.

It's this sort of inconsistencies between different accounts that makes drawing up a timeline/chronology for some UFO incidents REALLY hard! Apart from the Roswell incident, similar problems exist in relation to some of the times and dates regarding the Rendlesham incident(s)...
edit on 5-3-2014 by IsaacKoi because: (no reason given)


Yes I have to agree.

Perhaps I should have said that all we know is that the USAAF declared they had found "a flying saucer" in July 1947 and then retracted it.

Even that statement has to be considered in the context of the times. Kenneth Arnold's sighting was only weeks old when the statement went to press. The term "flying saucer" was a new term.

Roswell remains the "UFO incident" which has a global awareness but remains difficult, perhaps now impossible, to fathom out what really happened. However these pdfs are not as dry and dull as we might expect from a government document. At times it does appear that the researchers involved really were trying to find explanations to each piece of the story that had been put out in various publications on the incident. Sometimes the conclusions it comes to are weak. However anyone seriously interested in the case should download the documents.

Thank you again Isaac. The truth is still out there......somewhere