No.. Not the uneducated berserking marauders shown in movies and popular culture, but the real deal and who they actually were. Culture depicts them as bloodthirsty killers...and they were, to some. In this case, history IS written by the losers, not the winners as the Norse hit France and England without mercy or remorse for quite a period of time...but never to anything like defeat. It simply hadn't been the point or capability they held then. Still.....English and French Monks weren't kind or even a little forgiving in how they told the tales of the men from the North....so we've had it told all this time.

LONDON (AP) — They had names like Thorfinn Skull-splitter, Erik Bloodaxe and Ragnar Hairy Pants. No wonder the Vikings have a rough and bloody reputation.

A new exhibition at the British Museum strives to make people think again about the Scandinavian pillagers whose name means "pirate" in Old Norse. Through their ships, weapons, crafts, words and even skeletons, "Vikings: Life and Legend" aims to show how Viking energy and ideas redrew the map of the world.

Redrew the map, they most certainly DID. They ventured into modern day Iceland, Greendland, Canada and some speculate, even further. We know they settled deep into modern day Russia, traded down into the Middle East and found easy sailing for their ships and skills wherever they chose to go.

One particular thing about the Norse which really blew me away in learning about their culture and true history here recently was HOW they went about getting to the northern areas of the Arab world and Eurasia. One can see, easily, Europe and Eurasia are cut up by rivers. Many many rivers. They can carry a determined trader or raider a long way ...but ..they don't necessarily CONNECT how you'd like them to, while under sail in ships.

The Norse never let a little technical problem hold them back though, and their method for sailing BETWEEN land locked rivers was ...novel, if not unique. (It's been done since...hard to say about prior). They literally rolled their boats between waterways, across dry land. Using a series of rollers (logs), they just fed the ones out the rear of the process into the front and hence, the boat stayed mobile without damage to traverse rivers like few had ever done it before them.

The centerpiece of the show is the biggest Viking ship ever found. Dug up on the banks of a Danish fjord in 1997, it is 37 meters (120 feet) long and had 40 pairs of oars. Its scale is awe-inspiring even if only 20 percent of the ship's timbers remain.

If one can make it to see this display, I'd strongly recommend it. I very much wish I could attend it myself, but money and time just won't allow it. I'd very much like to see what I've read so much about ...but it's there for those close, that can make the trip!

I thought it was well-known by now that the Vikings were a sophisticated civilization, which put great value in art and commerce. And that their "raids" in mainland Europe might have been in large part self-defence, or at least retaliation to Christian offensives into Northern Europe. History is written by the victors, and in this case the Pagans lost.


This is super cool...im a huge viking fan...I watch the viking tv series and this may be blasphemous but I like it better than Game of Thrones...

Im just about to start a book called the Saxon series or something like that...was recommended by a friend here on ATS! Another book called Byzantium is a great read and has a cool spot for vikings in it.

When you think of pirates and privateers...vikings were really neither...it was their culture. That is so amazing to me....its just what they did...or some of them did. They didnt have a country supporting their raids and they weren't outlaws..its like who sat down and said "hey...we are gonna start raiding ok?" and everyone said "aye". Amazing. And then there is always the Techno Viking !!!!


Cool thread, If the exibition came to my area I will check it out.

The thing that gets me though is the fact that you wrote the thread in such a way that it paints a picture that you think everyone only knows what is being shown on tv or movies..

For me and most people we learned about all this stuff in elememntry and secondary school (highschool). This is nothing really new... I thought that this was all common knowledge..

Other then that it was a good read hopefully they bring it to the Vancouver B.C area.


Here's one of their 'hogback' stones they left behind in Scotland. 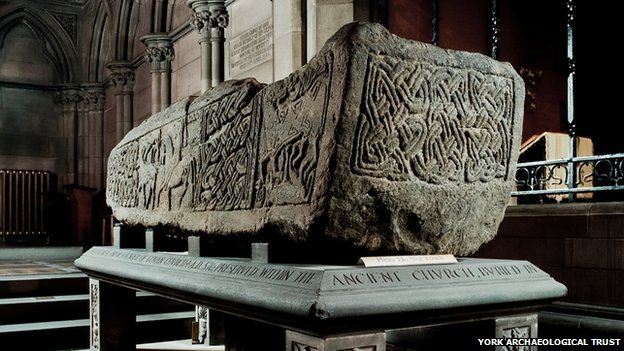 And one of their standing stones: 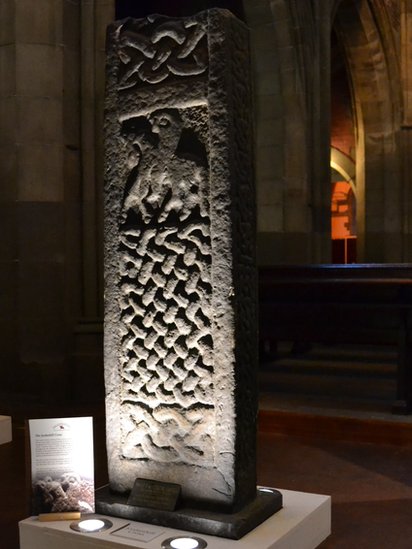 Not really convincing anyone they were barbarian savages!

posted on Mar, 4 2014 @ 06:41 PM
link
The viking period is one of the best examples of how human behavior and cultural development are intimately connected to natural events and climate changes.
In this case the natural event is passage of the earth through the tail of Haleys comet , several small impacts of cometary debris and the eruption of krakatoa, all in the 530's.
The change in climate from these events was instrumental the final fall of the
western Roman empire.
As southern and western Europe saw a serious degradation in climate, Scandinavia saw an overall mellowing of climate. The warmer milder climate allowed for a populating explosion in Scandinavia. From the beginning of the 7th century to the beginning of the 9th, the population of Scandinavia more than doubled.
So, this doubling of population ran up against Nordic cultural practices , such as the first born son inherited all family property, and only a man with land could take a wife.
Before the population explosion, second and third sons rarely lived to adulthood, so there was little competition for inheritance.
After the explosion not only do you have un-landed sons with no hope of getting a wife , but you also had daughters without possible husbands.
If you had money you could buy a small plot of land and or pay a dowry to get a wife.
This lead to bands of second and third sons raiding unrelated clans for loot with which to buy land or a bride.
Once they found out how lucrative it was to raid the settlements of England, France and the low countries, going Viking became a sustainable economic model.
The need for more land led to the Swedes exploring inland in what would become Russia
edit on 4-3-2014 by punkinworks10 because: (no reason given)


The rune stones are fascinating, aren't they? I can't help but think some of those communicate more than they're given credit for. Either way though, they are among the people better remembered for having left enduring monuments around the lands they happened to stay or came to settle in.

I think they were among the few I've looked at in my history courses where there weren't any obvious 'why didn't they do this or that'. If anything..I do wonder how much further south, if any, they may have gone from their stop over in Northern Canada. Why stop, since the coastline would have just kept right on going with empty land they seem to favor? It's an interesting side path in history in it's own right. All by their having been seamen and craftsman of very high skill for the times (or any time, for the material they worked with, really).

posted on Mar, 4 2014 @ 06:59 PM
link
The popular culture image of vikings irritates me alot more than it should. Vikings were farmers first and foremost. Nobody remember or cares about farmers.