US to show off nuclear capability to North Korea 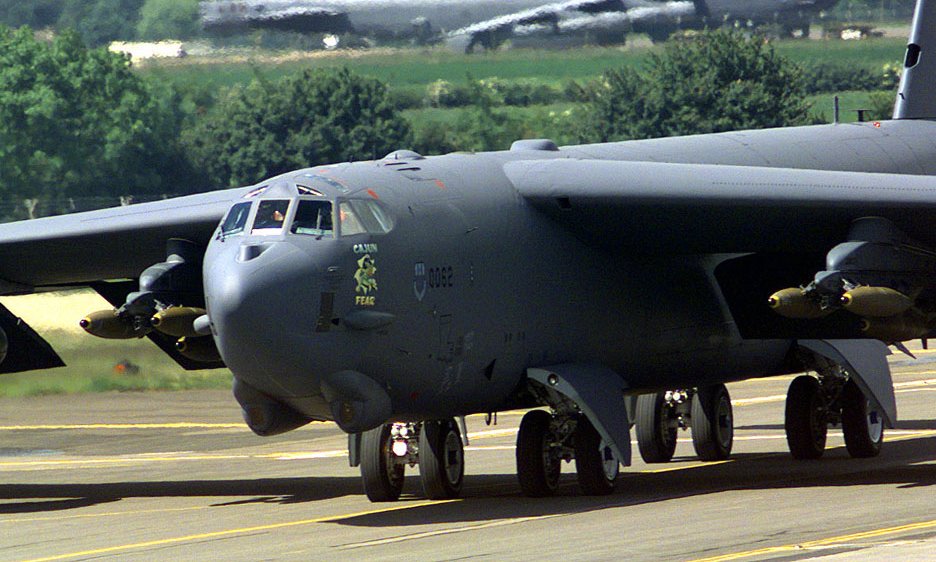 US to show off nuclear capability to North Korea

WASHINGTON -- The U.S. military is considering the use of nuclear warhead-capable B52 bombers in its joint exercise with South Korea that started Monday, sources told the Nikkei.

The B52s will drop bombs from an air space over the exercise field as part of the joint military exercise.

The U.S. military aims to display its overwhelming military power to North Korea by showing off its weapons of mass destruction. It hopes that by displaying the devastating weapons, it can defuse rising tensions in Northeast Asia.

B52 jet bombers are capable of flying approximately 16,000km, and can carry precision-guided conventional ordnance and bunker busters. The U.S. deployed the aircraft in the Afghanistan and Iraq wars.

The U.S. last year flew B52s in an air space over the East China Sea to provoke China, which had unilaterally set an air defense identification zone there in late November.

If any contingencies break out on the Korean Peninsula, the U.S. military would consider using B52 bombers stationed at its Andersen Air Force Base in Guam.


Meanwhile on the other side of the planet....

The US considers this option. I wonder if this will impress the North Koreans? I seriously doubt it. It's not like they have acted as if this sort of thing would impress them if anything they may lash out even worse than they have in the past. With all that has transpired in the world the past couple of weeks I'd think Obama would try to tone down provocative action not increase it?

Such is the world we presently live in...


This really makes no sense. Why would we want to impress a madman? It's not like he really cares, and anyone that doesn't already know that we have B-52's and nukes...well...is a madman. I seriously do not get this...


This really makes no sense. Why would we want to impress a madman? It's not like he really cares, and anyone that doesn't already know that we have B-52's and nukes...well...is a madman. I seriously do not get this...


Obama has looked weak in the eyes of some over Ukraine and Russia.

This is his way of compensating.


But, don't the Russians know our capabilities, as well? I'm just trying to wrap my head around this, I guess. I mean, we are doing it for a reason, but I don't think it's obvious yet. Maybe one of these bombers will crash, or get "shot down". I just don't think it will impress anyone...N. Korea, or Russia. They already know what we can do...the whole world knows it.

Maybe you are right, though. It could be an impudent Obama trying to look big. Maybe they really want China to take notice...now that would make more sense, to me. Maybe it's an attempt to say, if we interfere in the Ukraine, we are still big enough to watch you over in Asia...

posted on Mar, 4 2014 @ 09:11 AM
link
You know, I think we have every right in the world to have military exercises with anyone we want, who wants that right back with us. No one, especially Kim, has a right to say otherwise. Ditto for HIM, as far as that goes, and whomever he'd want to go play war games with for awhile. Whatever... Every nation does it, and it's bonding between nations as much as any physical NEED to have the practice time between flagged forces.

However...... When we look to deliberately alter our exercises or add elements into them DELIBERATELY to spark the reaction of neighboring nations we *KNOW* have a history of going batcrap crazy over it? We're *TRYING TO START A WAR*....and damnit, was McCain rallying for revolution in Ukraine the last 4+ months (and more like the last few YEARS for action against Russia) not enough??? That may not pop, Syria is deflated, so it's back to North Korea??

Will they not stop until we're in a whole NEW war to replace the "crisis potential" of the current and wildly unpopular ones?! Do these idiots in Washington believe war by THEIR hand will somehow enjoy a honeymoon or tolerance phase of ANY SORT from the public?!


If that is the case, and I was the Russians, that would have the opposite effect of amusing me no end.

It's an admittance of impotence, the very message they don't want to send.


This from just the other day....
Report: North Korea fires two missiles off eastern coast

Seoul (CNN) -- North Korea fired two short-range missiles off its eastern coast Monday, the second such launch in less than a week, according to the South Korean Defense Ministry.

The defense ministry said it is on high alert and monitoring the situation. It called on the North to stop the missile launches. The weapons launched were Scud missiles that flew more than 500 kilometers (311 miles), according to the defense ministry. The missiles landed in the sea, South Korea's semi-official Yonhap news agency reported.

On Thursday, four Scud missiles with a shorter range were fired into the sea off North Korea's eastern coast -- flying about 220 kilometers (137 miles), according to Yonhap -- just days after the start of annual joint military exercises between South Korea and the United States. North Korea opposes such exercises, which routinely cause friction among the three countries.
North Korea's missile capabilities

posted on Mar, 4 2014 @ 09:14 AM
link
I think you are exactly right DarkBlade. This is not really for N. Korea. And as Catacomb mentioned, when you add that China is gonna get a good look at it too.... The US wants to take it's shirt off and show it's muscles.

If they want to impress use B2. Even I was in owe when I saw one.


I believe they did that last year...or was that the year before?

That's what floors me. It's not like they are actually showing anything to anyone. We've already run nuclear bombers against his border line and he's gone totally nuts over it. So...I guess we WANT Kim to go totally nuts again, hence, doing the same thing for predictable results.

The question is.. Why, at this moment of all times, is it suddenly important for us to add to the general 'pissed off' tone of the world against our nation and policies? You'd almost think running ourselves down and destroying our own image was the point. (sigh)


I have to admit it all does seem pretty pointless.

North Korea know full well already what the west has.

Flying a few bombers near north Korea is not going to make them give up and surrender. Its just going to piss em off a bit and annoy china for antagonizing there retarded cousins. so I see your point.

While N. Korea may "know" of our capabilities on paper and such, I doubt anything is quite as awe inspiring as a flock of B-52s seen in person.

Putins lobbed out his offer this week, now Barry has to get his black bomber out..time to reach for the tape measure..

How sad when they have to compensate penis size with a stategic bomber..


I was under the impression that this demonstration had been removed for these war games.

I wonder if its directed at China, who just announced their new medium range missiles can hit Guam.

posted on Mar, 4 2014 @ 09:36 AM
link
It could just be to see what reaction NSA can gleene from the pulse of the world . I mean with whats already going on it might just be to intercept conversations between political powers . At first I thought they might actually drop a new type of bomb .could be a diversionary tactic .Hardly seems worth while wasting fuel to show of the b52 ....

Dapaga
I think you are exactly right DarkBlade. This is not really for N. Korea. And as Catacomb mentioned, when you add that China is gonna get a good look at it too.... The US wants to take it's shirt off and show it's muscles.

So we have decided to use the "Jersey Shore" defense.


There is a point, I believe, where a match-up becomes so totally absurd for one side being overwhelming to the other? Demonstrations like this may show more about the insecurities suffered by the leader of the demonstration nation ...more than the one being demonstrated to.

We can literally nuke life off Earth...several times over...and with the Russian weapons added? A couple dozen times over...if dispersed for that purpose, anyway. No one has any question what we have, what we can do or what time frame would be involved for flight time from Whiteman AFB to Pyonyang, or Guam to Pyongyang. He can probably table top his own life expectancy in different scenarios to the minute.

Why push? What is gained?


I agree. This act only makes us look like cowardly trouble makers. We are acting like North Korea now?? What is so hard about the gov remaining silent overseas and concentrating on homeland problems?

On Monday of this week AlertsUSA subscribers were notified via text messages to their mobile devices that N. Korea is reported to have completed site preparations for their next nuclear weapon test at Punggye-ri, as well as upgrades to their long range missile launch complex at Tonchang.

Initial disclosure of the work came early Monday when S. Korean Defense Minister Kim Kwan-jin briefed the 300-member National Assembly on N. Korea’s efforts at both locations. “These things (the nuclear test and the missile launch) depend on the decision by the North Korean leadership. As seen in the past, the long-range missile test and the nuclear test are connected to each other,” Kim told lawmakers.

Additionally, their report goes on to state that, “Modification of the Sohae launch pad should be completed by March or April 2014 if work progresses at the current rate. The pad will then be available for additional launches, probably of the Unha-3 rocket or a slightly longer variant, such as the Unha-9, which was first displayed as a model in 2012.”