posted on Mar, 3 2014 @ 12:29 PM
link
Yes, I know it's a bit early and currently quite cold so tropical storm systems are probably the last thing on anyone's minds who live in areas in which such things are wont to occur. But I've got the time and inclination presently, so here goes

Hurricanes, Tropical Storms, Tropical Depressions, or Tropical Waves can be reported in this thread. Significant or particularly destructive storms can of course also be reported as individual threads.

Here are a few helpful links I've used in the past: 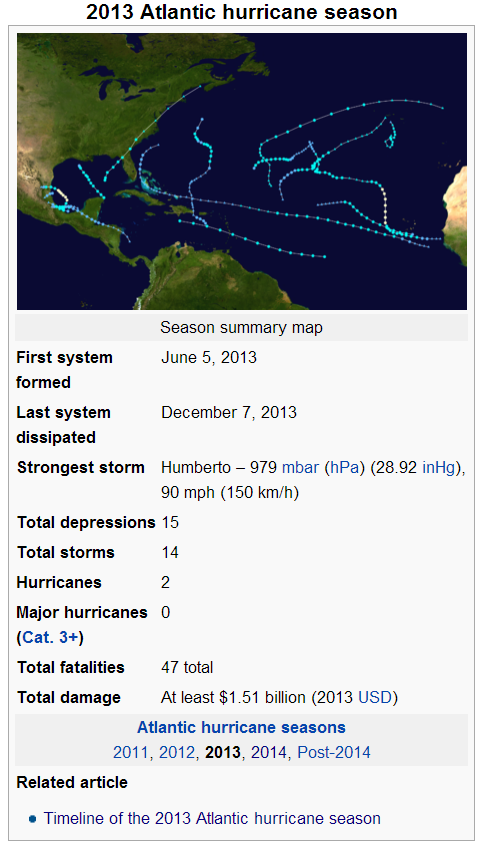 For this upcoming year we have the following:

The following names will be used for named storms that form in the North Atlantic in 2014. Retired names, if any, will be announced by the World Meteorological Organization in the spring of 2015. The names not retired from this list will be used again in the 2020 season. This is the same list used in the 2008 season with the exception of Gonzalo, Isaias, and Paulette, which replaced Gustav, Ike, and Paloma, respectively. The first name to be used this season is Arthur.

I would also suggest one read through The Redneck's thread: 14 hours in Hell, 4 days to Home on what can happen in severe weather and how it can be dealt with.

If you've got a link, please share it. The more prepared we are, the better able we will be to help others.

jadedANDcynical
Been doing some reading on and off about a variety of subjects at an equally wide range of sites. I came across this study published in 2010:

We identify the formation of Category 5 hurricanes occurring mainly around the decadal minimum variation of African dust and in deep water areas of the Atlantic Ocean, where hurricane eyes have the lowest pressure. According to our results, future tropical cyclones will not evolve to Category 5 until the next decadal minimum that is, by the year 2015 +/- 2.

And looking at the statistics for 2011, we can see that there was not a Cat 5 storm in the North Atlantic, and only 2 Cat 4 storms.

Timeline of the 2011 Atlantic hurricane season

Will be interesting to look back at the end of this season and see if it holds true.

Hurricanes are heat transfer engines that move heat away from the equator toward the poles. Now, the northern seasons have been on a bit of a lull and the paper linked above seems to have a plausble mechanism.

We shall see if this continues and look back at the end of this season for further analysis.


But if it's not you'll sit up with me through it all night again won't you K-dog. I've changes my screen name sine that day I'm Karen in Virginia. Remember?


Yes, Karen, I remember. I will stay with you if anything comes your way.

P.S. Thank you and Sonofsun for your electric universe and expanding earth post. The most thought provoking piece ever!
ken


Thanks for the kudos. I'm working on my next couple of posts for that thread. RL has intruded and made more demands of my time of late so that thread has been shuffled to a back burner for the time being. Not to worry, more is coming.

In keeping with my prior contributions to two of the other 'Watch' threads of this year (Quake Watch & Volcano Watch), here is something on the subject of electricity and hurricanes:

A survey of reports of electrical activity in hurricanes and typhoons from flight notes and personal experience (18 years, >230 eyewall penetrations for R. A. Black; 20 years for J. Hallett, plus that of others at the Hurricane Research Division), and perusal of flight notes dating from 1980, show that lightning in and within 100 km or so of the eyewall is usually sparse. However, occasionally, significant electrical activity (>one flash per minute) occurs in or near the eyewall.

Since cloud-to-ground (CG) lightning can be observed with remote detection networks that provide the polarity and frequency of CG lightning, there is potential that hurricane evolution may be detected remotely and that lightning may be usable as an indicator of a change in the storm intensity and/or track.

Electrification of the Hurricane

And then there is this gem:

Abstract—The mechanisms of incipience and intensification of dangerous atmospheric vortex processes such as tropical cyclones (TCs) and their interaction with the Earth’s ionosphere are considered. Different models of TCs are analyzed, including models taking into account the ionization processes. The mechanisms taking into account the spiral field of velocities during TC formation are analyzed, as are the physical mechanism that explains the statistical correlation between short term variations in galactic cosmic rays (Forbush decreases) and the frequency of incipience and the intensification of TCs. It is shown that such an effect is conditioned by a decrease in the ion production rate during Forbush decreases against the tropopause and, hence, a decrease in the temperature upon the top of the ionosphere altitude because of a decrease in the latent heat release due to watervapor condensation on the newly formed ions. This process leads to an increase in the temperature difference between the ocean surface and the top level of TCs and, respectively, to the intensification of vertical convection, which results in cyclone intensification. It is concluded that the study of these mesoscale vortex processes requires taking into account not only the hydrodynamical features of these formations, but also their thermodynamical and electrodynamical properties. The results are important for the organization of studying and monitoring TCs with the use of space borne techniques.

The analysis of problems of TC generation and their interaction with the Earth’s atmosphere shows that the helicity of cyclogenesis should be considered when simulating these phenomena, as should the electromagnetic properties of these structures due to processes of ionization from different sources: on the underlying surface (natural radioactivity) and outside (cosmic rays) and inside of a hurricane (thunderstorm activity, corona discharges on drops, and breakdown on escaping electrons). Electromagnetic forces inside a TC can affect its dynamics, in particular, the development of inverse cascade instability. Ionization results in increased heat release in regions of intense ion formation, which apparently causes the formation of hot towers inside a hurricane with high thunderstorm activity.

The effective charge separation inside a vortex structure results in the formation of a strong electric field on the top edge of a hurricane penetrating into the ionosphere and producing local inhomogeneities in the ionospheric E and F regions. A difference in the tropospheric conductivity inside a TC and outside it can be a source of ionospheric anomalies, resulting in a change in ionospheric potential over it.

Effect of Mesoscale Atmospheric Vortex Processes on the Upper
Atmosphere and Ionosphere of the Earth
V. G. Bondur and S. A. Pulinets
Institute for Scientific Research of Aerospace Monitoring AEROCOSMOS,
Ministry of Education and Science of the Russian Federation and Russain Academy of Sciences
email: vgbondur@aerocosmos.info

So, it would seem that there are correlations to cosmic ray activity and Tropical Cyclonic systems. Enough so that further study is recommended.

That is changing and I'm interested in finding out what taking such paths uncovers.

posted on Mar, 8 2014 @ 11:03 AM
link
Watching the way Sandy hit us straight on, along with these awful snowstorms, week after week, after week, starting to worry about the track of the upcoming hurricanes.....nerve wracking. Seems we have been in the bulls eye for every northeastern storm since Sandy...TY for the info OP. S& F.....

posted on Jul, 1 2014 @ 01:00 PM
link
Wow, no one's been paying attention to the Gulf Stream Blob the last few days, huh? The season's officially kicked off with a named storm.
NHC linky-loo

Recon flight maps & data in a non-confusing form (props to the site for the info!)
Edit: That Tropical Tidbits Recon page seems to be having trouble ATM. Here's the Recon page from tropicalatlantic.com for now instead. Data page is directly underneath "Live Atlantic recon in the last 30 minutes..." Or just click here to go directly to the data page for today's flight into Arthur.

posted on Jul, 1 2014 @ 10:49 PM
link
a reply to: Nyiah
O, I've been worried about his years hurricane season since I posted in March. Which Is right above your post...Arthur's on the way.....I just didn't expect it to start so early. Sure hope this doesn't take the same track as most of other recent storms....TY for the info

posted on Jul, 2 2014 @ 07:46 AM
link
This is an early storm for this region. I know the official hurricane season is Jun through November but here in the mid Atlantic our season is really August/ September. July is our hottest and driest month so I'm really glad to see this mild system head in this direction. A nice drenching before it gets really dry will help the lawns and trees.
A cat one is what I call a cleaning storm. Just strong enough to shake the dead branches out of trees but not strong enough to topple the trees. a reply to: Nyiah

posted on Jul, 2 2014 @ 07:54 AM
link
Arthur's nothing to worry about. I have the welcome mat out for him but it's looking like it will be too far out by the time it reached this lattitude.

posted on Jul, 3 2014 @ 05:40 PM
link
Arthur is now a category 1 hurricane, approaching category two. Its track seems to keep drifting more and more west, and my location on the Chesapeake bay is worrying if it keeps heading my direction.

posted on Jul, 4 2014 @ 05:17 PM
link
Here's the Weatherbell update for Cape Cod. It looks like they're expecting most folks up the East Coast to mostly be in the clear through this evening. 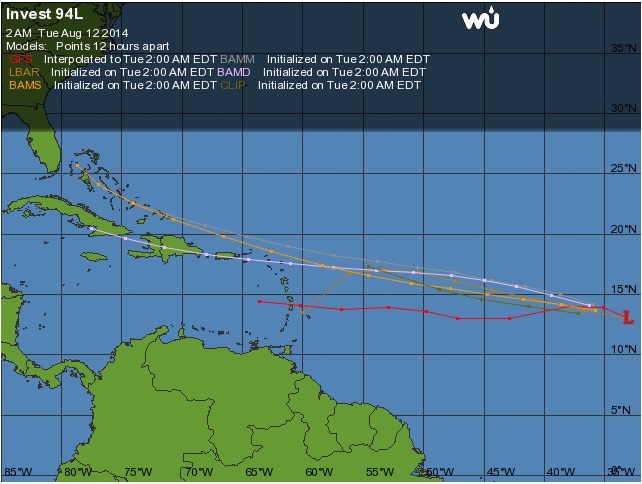 Still a ways out there, but its good to be aware.

Probably not much more than a good bit of rain and a little wind.

I needed somewhere to put this and Quake Watch did not do it for me so here you go, the difference between the durations of Category Force storms reported and the actual days on which the storms were at Category Force. Those of you who look at my Geophysical reports each week will be aware of this. (You two need not bother with this)

This discrepancy between what is reported and what actually happened is growing as shown by the falling actual trendline -v- the rising reported trendline.

The season has been a little quiet and thus the thread follows suit.

If I am underatanding the gist of your post, it seems as though the reported intensity of the storms from the season is above what their actual intensity is?

The effect of which is a gap between how bad we are told the storms are when compared to their actual energy output.

I note that ypur report contains storms from both hemispheres, do you happen to have a breakdown by region?