posted on Mar, 1 2014 @ 02:26 AM
link
What I'm about to share with you is absolutely true, although you may never have heard of it. The press covered it before it suddenly became very hard to find online as it is an older story. Disclaimer: I am retelling it, not to ridicule; rather, it happens to be one of the funniest stories I have ever heard.

The following UFO video thread by Sublimecraft www.abovetopsecret.com... reminded me that I had featured it on an old website of mine so I searched some old files.

It happened in 1998. When it was made, it was said to cover the full area of 5 soccer fields or pitches, picture it: That's f-i-v-e soccer fields. With over $640, 000 worth of instruments affixed to it to measure the ozone layer, it was filled with helium and stood 25 storeys high. (Imagine it: That sucker was equal to a 25 storey building!) It was a mighty balloon that could be seen from a distance of 180 kms, or from 111 miles away. 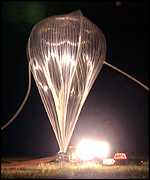 The scientists' plan was to launch it on Monday, let it do its thing and on Wednesday it would fall back slowly to earth with the important instruments. The collected data would be sent to science researchers with the Canadian Space Agency, Environment Canada and the University of Denver, Colorado.

The project began smoothly enough on Monday, August 24, 1998, at an airfield in western Canada, in Saskatchewan, from where the prized scientific ozone-measuring balloon was launched. 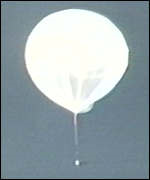 That's when the paradigm began to shift and liberty began to manifest itself in a totally new way: The gigantic balloon began to drift eastward.

Now Canada is a huuuuuuge country. At first no one seemed to worry, because it could easily be spotted from a distance of over one hundred and ten miles and Saskatchewan is very flat. Saskatchewan happens to be Canada's breadbasket with mile upon mile of fertile wheat fields. The monstrously huge balloon would probably set down in one of those endless fields, but no one had reported seeing it yet.

Now in spite of the belief and expectation that it would return on Wednesday as it was supposed to do, the balloon acquired a nature akin to that of a rebellious youth who believes he will live forever. Turning away from expectations and plans, it followed a force beyond its control. A force of true liberation grabbed it, compelling it to rise majestically, then dance freely as only a balloon full of helium could. It was one with the sky. It rose, completely liberated, coasting and drifting and soaring whereever it pleased. Can you appreciate how the open skies beckoned and played with it at every whim of the wind on this August day? How awesome it must have been!

No one on the ground knew for sure where the darn thing was. Just to make sure though, the Canadian Air Force was sent out to spot it. Two CF-18s criss-crossed the skies and scanned the glorious grain fields of Saskatchewan but they could not locate it anywhere on the ground.

You'd never be faulted for thinking that with a transponder any plane in the air could detect its presence and thus avoid danger, but the problem was that there was no transponder on that humungous helium balloon. Why put one on when the balloon is only supposed to rise, then return shortly to earth and be easily spotted by anyone within 111 miles? Saskatchewan is uber f-l-a-t, so there were no anticipated problems in finding it.

The freedom flight of the mighty balloon continued across Manitoba with all its lakes, and at some point it was spotted. Finally. Canadian pilots who, just the year before had won the cup declaring them to be the best fighters in the world at the Top Gun competition, tried to shoot it down. The-Mighty- Balloon- That- Could just kept on drifting, rising and drifting, playing with clouds, ducking and hiding again from the pilots. Oh my, they could not have been pleased.

In what surely must have been a nightmarish scenario, air traffic controllers had to be alerted to stand ready to reroute. Lots and lots of planes fly in and out of Pearson Airport in Toronto as well as the Trudeau International and Dorval airports in Montreal. Lots land in the Maritime provinces, but many huge planes cross the north Atlantic too. --See where this is going?

The US maritime dispatched a surveillance plane from Iceland to look for the balloon using radar, but failed to locate it. The RAF joined in, trying to locate it as well.

According to the BBC

Two Canadian air force CF-18 fighters fired more than 1,000 rounds of cannon shells into it off the coast of Newfoundland.


Cannon shells? Off Newfoundland? Oooh, by then they must have been some pissed! But after all those shells, they had to face the fact that they either missed or our Top Gun pilots simply could not fell a balloon!

The USAF engaged the enemy too, and poured their ammo at The Mighty-Balloon-That-Could over the northern Atlantic, but in case you didn't guess it, I have to inform you that the USAF pilots were unsuccessful as well! (Hey you just cannot make this stuff up)

There was absolute bedlam in all the air traffic control towers of Europe. Delays, re-scheduling, re-routing and in addition I'm confidently guessing that a temporary no-fly zone was quickly established.

Enter the British RAF with guns a-blazing. A multi-national targeting exercise was now being played out over the Atlantic sky. But the RAF had no better luck than the Canadians or the Americans.

An Icelandic official said the Canadian attack had caused extensive punctures but failed to release the helium gas from the balloon.

We'll never know how many countries were involved in trying to down the balloon, but according to Norwegian aviation authorities, the balloon was last seen drifting over into Russian air space on Monday, August 31st, at about 0500GMT over the Barents Sea just north of the Arctic island of Spitzbergen in Finland!

The holes in the balloon did allow for its final descent in Finland. While the scientists received the data, the instruments never detached as they were supposed to do and were not recovered.

Oh wait! There's one more thing. I had filed this story somewhere and guess what brought it back again? A thread of a UFO of course. Think that mystery video might be solved, Sublimecraft?

And that, ATSers is my best story. Some links to the story

posted on Mar, 1 2014 @ 03:41 AM
link
I used to live on the outskirts of Austin, Tx when I was a kid. I grew up there. This happened when I was a young teenager. I never believed in UFOs until one Saturday night in the mid 80s. One night my older brother came bursting in our front door freaking out saying there was a UFO hovering over our house. After my parents figured out he wasn't high as a kite we all went outside to see what was going on. Right above our house was a really big triangle craft. It was solid black with white lights on the points of it. It was just hovering there not making a sound. My parents freaked, locked us in the house for the rest of the night and told us not to tell anyone because they would think we were crazy if we said we saw a UFO. It sparked a great fascination in UFOs with me. Fast forward to 2004 in Balad, Iraq. I was eating lunch with some Air Force guys. I brought up what I had seen that day and they kind of just laughed and told me, "Dude, that's right by Lackland AFB. We were testing stealth blimps there in the 80s. That's what you saw, not an alien spacecraft." Needless to say I was terribly disappointed. All those years I thought I had seen an actual spaceship of some sort LOL.
edit on 312014 by Holographicmeat because: sp


Did the balloon maybe contain multiple cells of helium gas. Thus making it harder to puncture all of them and allow the helium to escape into the atmosphere?


Good question, to which I don't have the answer.
Maybe someone else does?


Nicely played, Holograpicmeat. Although if I had seen one of those things over my house, I too would have shaken in my boots.