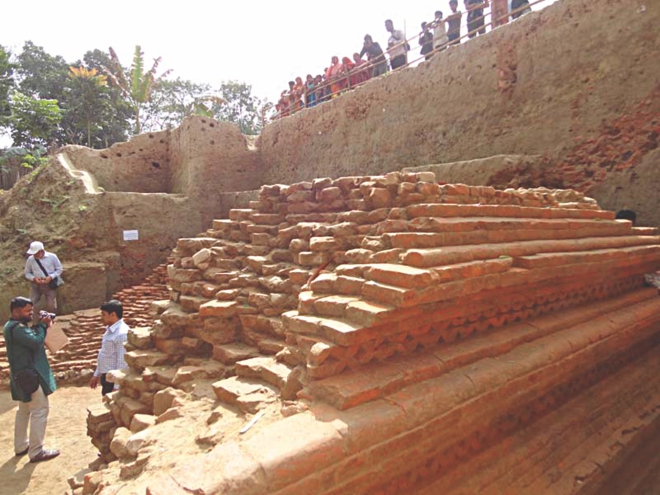 The remains of a 1,000-year-old Buddhist temple, which archaeologists unearthed at Nateshwar of Tongibari upazila in Munshiganj. The photo was taken yesterday.

Archaeologists have recently unearthed an ancient Buddhist temple that is believed to be a thousand years old at Nateshwar in Tongibari upazila of Munshiganj. Cultural Affairs Minister Asaduzzaman Noor made a formal announcement of the discovery of the temple during a press briefing at the archaeological site yesterday afternoon. A prayer room of Buddhist monks measuring nine metres in length and nine metres wide, an octagonal stupa and brick-built drains and other artefacts were also found there.

While touring the site, Noor, also a renowned media personality, expressed his surprise at the findings at such a historically important place in Munshiganj.

"It is a matter of pride not only for Bikrampur but also for the whole nation," he told the briefing. He also expressed the hope of unearthing a monastery beside the shrine. Archaeologists found most of the sections of the temple were in a state of ruin, except for a 2.40-metre tall


just came cross this rather short but interest story of a recent find. I always find these stories interesting. It's interesting to note that many locations around the world will often have older structures below the known site above. Sometimes these turn out to be very ancient.


One thousand years old is mediaeval, not ancient.