posted on Feb, 28 2014 @ 10:05 AM
link
Hey guys, what do we make of this? Seems like it's heating up every hour in this region. History in the making? We live at interesting times indeed ! People have identified them as Hinds which are an attack helicopter with slight utility for transport (8 people). Along with reports from the BBC of Russian troops heading out from the Naval bases into the cities.

Considering Sevastapol and Simferopo airports have just been occupied by organised armed men wearing uniforms, It's not a coincidence.
Also there are pictures and this report from BBC
The BBC has seen eight trucks with the black plates of the Russian army moving towards Simferopol.
www.bbc.co.uk...

I knew it would happen as soon as it came out Ukraine were thinking of suspending the Kharkov agreement.

I knew that as soon as Ukraine even breathed on sevastopol Russia would come in.
edit on 28-2-2014 by crazyewok because: (no reason given)


15.50 BREAKING: The Russian foreign ministry has admitted that armoured units from the Black Sea Fleet base near Sevastopol had entered Crimea in order to protect fleet positions.
“The Ukrainian side was also passed a note regarding the movement of armoured vehicles of the Russian Black Sea Fleet in Crimea, which is happening in full accordance with the foundation Russian-Ukrainian agreements on the Black Sea Fleet,” the ministry said in a statement posted on its website on Friday afternoon.

Couple this with the recent discussion of abandoning the Kharkov Agreement, the airport being closed, and the countless armed men surrounding everything and we're in for an interesting weekend.

(By interesting I mean bad by the way).

posted on Feb, 28 2014 @ 10:17 AM
link
The Ruskis will stand by their stated determinations and are definitely capable of utilizing military force covertly as well....ie the naval troops etc that are already in country....there is no doubt that they could be making a silent invasion.
But....are those really Russian Hinds?
Could be Ukranian ones 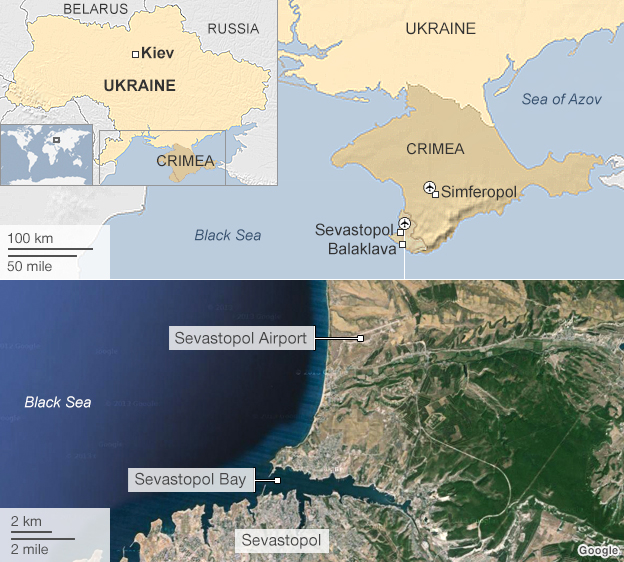 I didn't get a count, but that looked like more than enough to secure a naval base. Great Video.

posted on Feb, 28 2014 @ 10:35 AM
link
For those who believe Russia will walk away from the Ukraine-Crimea without engaging in a brutal protracted apocalyptic fight to the death, you'd better think twice.


To tell you the truth, I stand with Russia on this. They're not the aggressors here, they're merely trying to protect their assets.

Realtime updates, really good to keep open while predicting the start of WWIII


There's plenty of evidence indicating that international bankers/financiers are acting as antagonists.

“The hand that gives is above the hand that takes. Money has no motherland; financiers are without patriotism and without decency: their sole object is gain.” --Napoleon Bonaparte

posted on Feb, 28 2014 @ 11:02 AM
link
I believe that Russia is getting ready to make her move, they are trying to set their pieces at key ports around the world.


I suggest everyone to go to twitter and type in the search bar : #Crimea

A lot of talk about a real Russian invasion.

Edit
17:05: All aircraft movements at Sevastopol's Belbek airfield are stopped after unidentified individuals seized the runway, a military source tells the Interfax-Ukraine news agency (BBC Monitoring).
edit on thAmerica/Chicago228000000k2014 by MessageforAll because: (no reason given)

thesaneone
I believe that Russia is getting ready to make her move, they are trying to set their pieces at key ports around the world.

I know your American education and media has likley brainwashed you into Red paranoia.

But russia are not in any position to take on the world. Outside its borders the west world crush them. Yeah Russia is quite capable of defence but certainly not world domination.

They just want the Crimea.

posted on Feb, 28 2014 @ 11:10 AM
link
Do you guys think Ukraine will resist militarily. The acting PM sacked the commander in chief of the Ukrainian military today.

Secondly do you guys think Russia will just stop at Crimea, will they push ahead further?

asen_y2k
Do you guys think Ukraine will resist militarily. The acting PM sacked the commander in chief of the Ukrainian military today.


Maybe. It would be suicide though. I would say they wouldn't be that stupid but the fact they have mentioned cancelling the Kharkov treaty with Russia shows this new Ukrainian government are not that bright. If they were bright they would have reassured Russia usage of Sevastopol right from the beginning

asen_y2k
Secondly do you guys think Russia will just stop at Crimea, will they push ahead further?

Yeah unless Ukraine makes a war of it. Russia would get away with siezing the Crimea but if they tried for all of Ukraine I think they would be looking at a lot of sanctions at the very least.

If Ukraine decide to fight for it the Russia may end up takeing the war into the rest of Ukraine.

posted on Feb, 28 2014 @ 11:18 AM
link
If the (illegitimate) Ukraine govt Annuls the agreement , it is as good as proof there intensions are NOT to have friendly relations with Russia
If so Russia will invade Ukraine, it's pretty much a given
At which time 50% of Ukraine's forces would defect, i expect Russia know's this
edit on 28-2-2014 by all2human because: (no reason given)


Again with the put downs