Sen. Rand Paul, who has been in a bit of a tiff recently with the Clintons, says that any Democrat who has raised campaign money with former President Clinton should return the cash to protest his sexual behavior in the White House.

Bill Clinton is a sexual predator ?


On one side stands actor Tom Sizemore, who claims that he helped former President Bill Clinton arrange for an affair with his ex-girlfriend, actress Elizabeth Hurley.

Haven't you heard Bill Clinton is America's 'Most forgiveable Liar' ?

Come on Rand out of everything ole Bill Clinton has epically failed on you picked his bedroom ?

Between his epic failures of getting Bin Laden

The End of Glass Stegall

The epic failure of NAFTA:

But hey Rand the thing that 'upset's' you is who is in Bill's bedroom ?

posted on Feb, 7 2014 @ 01:00 PM
link
Rand Paul is going further and further off the reservation with every speech he makes.

Why is it that Senators and Congresspeople who make such ridiculous comments on a regular basis get so much attention in the media, while regular lawmakers just going about their regular day are barely known to Americans?

We all know the likes of Rand Paul, Ted Cruz, Michelle Bachmann, Marco Rubio, John Boehner, Peter King etc, but do we actually know the people who are really working hard in The House?

America deserves better representation than this, but unfortunately, it appears that the average American voter is too stupid to realize that they've been had.


I would rather have a president sleeping with women, even multiple women, more than a president who is destroying the USA from the ground up!! Pick your poisen, Bush or Obama....Give me good ol Bill back!! Anytime of anyday anywhere, I would vote for bringing Bill Clinton back, right now!!


I don't especially after ending Glass Stegall, and NAFTA.

How can you hate Slick Willy? 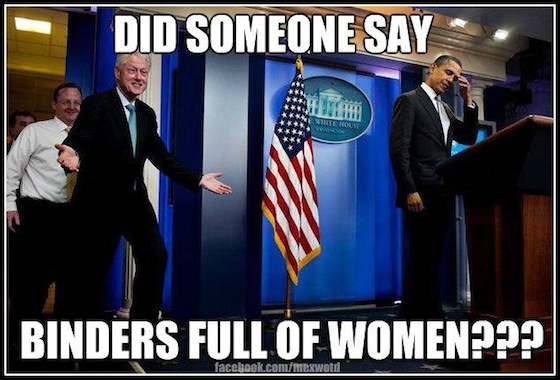 
Sounds like rand paul needs to get a life.

His problem is that there are no popular living republican presidents to raise money for him and his cronies.


Funny how something like this can be spun to make Rand look like the bad guy, but if you actually listen to what he is trying to say, its a very valid point.

Predator? I dont see why. All the women were concenting right?

Unless there was rape or children involved useing the word predator is just hyperbole.

Plus who cares were he puts he ding dong anyway?

No, no they were not. Bill was fined for giving false testimony.

Unless there was rape or children involved useing the word predator is just hyperbole.

1) A 1969 charge by a Eileen Wellstone, 19-year-old English woman who said Clinton assaulted her after she met him at a pub near the Oxford University campus where the future President was a student. A retired State Department employee, who asked not to be identified, confirmed this week that he spoke with the family of the girl and filed a report with his superiors. Clinton admitted having sex with the girl, but claimed it was consensual. The victim's family declined to pursue the case;

2) In 1972, a 22-year-old woman told campus police at Yale University that she was sexually assaulted by Clinton, who was a law student at the college. No charges were filed, but retired campus policemen contacted by Capitol Hill Blue confirmed the incident. The woman, tracked down by Capitol Hill Blue last week, confirmed the incident, but declined to discuss it further;

3) In 1974, a female student at the University of Arkansas complained that then-law professor Bill Clinton tried to prevent her from leaving his office during a conference. She said he groped her and forced his hand inside her blouse. Clinton claimed the student ''came on'' to him and she left the school shortly after the incident. Reached at her home in Texas last week, the former student confirmed the incident, but declined to go public with her account. Several former students at the University have confirmed the incident in confidential interviews and said there were other reports of Clinton attempting to force himself on female students;
www.freerepublic.com...

posted on Feb, 7 2014 @ 03:13 PM
link
This dimwit does understand that Bill has been out of office for quite a while now right? You can tell the apple fell quite a bit from the tree because his father would have never said anything this stupid. He should give money back to his donors after he stabbed his father in the back when he supported Romney.

posted on Feb, 7 2014 @ 03:19 PM
link
I'm thinking the country has more pressing issues to be solved than pondering on what went on in Bill's bedroom 15 years ago,Senator.How about fixing this joke of a economy comes to mind as a problem...to me anyway.
edit on CSTFripm5361 by TDawg61 because: (no reason given)

posted on Feb, 7 2014 @ 03:20 PM
link
Funny how the repubs always forget that Newt was on his witch hunt, burning millions of taxpayers dollars over Bill's sorta soiree, that he was having a full blown mistress on the side.


Typical conservatives, blasting everyone else for whatever it is they are the worst offenders of.

But they need to press charges and it needs to go through a jury.

Isnt your legal system built on the whole "inocnet until proven guilty" ?

Until he gets a guilty verdict then he not a predator.

If he gets a guilty verdict in a jury then Il label him a predator too, but until then its hearsay

Guess some people forgot about FDR, and there is JFK too but hey WHO CARES!

And the infamous John Edwards.

And then there is Anthony Weiner.

Sorry there left wingers no room to talk there.


There are several people who have gone on record, and lawsuits
were filed. Bill Clinton settled out of court with Jones for 800,000k.

Besides, The Clinton Body Count grew over the years,
some women feared for their lives.


There are several people who have gone on record, and lawsuits
were filed. Bill Clinton settled out of court with Jones for 800,000k.

Besides, The Clinton Body Count grew over the years,
some women feared for their lives.


Grey area which I will concede to you.

Ok no guilty verdict, but settling out of court stinks.

Ron Paul probably shouldnt be makeing accusations, but Clintons charrector is certainly in queation.
edit on 7-2-2014 by crazyewok because: (no reason given)