Crop Circles are AMAZING...man-made or NOT !!

That's crystals within plants not a crystal structure of plants.
Sorry, I get picky sometimes.


Thanks for the contribution.


I knew this was going to be the wrong "crystaL" lol.

So tell me this Phage, do you believe that all of these crop circles are man-made or do you at least have an inclination to believe there has been some that cannot be explained away as to being completely unique and not of any normal human concocting?

I think they are all man made. All of the geometric ones anyway.
I don't rule out the possibility that there are purely natural origins for some irregular "circles".

Number 1 answers your question, it is because they possess incredible characteristics which is close to impossible to duplicate without complex equipment/planning. HAARP is as close of a guess as we'll get if we insist all of them are man made. Even so I do not understand the logic behind the government experimenting with geometric shapes in crop fields.

I'm interested in which natural process can create such beautiful geometric shapes while changing the characteristics of the plants and environment.

I also believe they can be man-made but not most of them, so we're almost on the same page.


Sorry Phage, still not buying it. You can say these designs are made with these fancy laser levels, but considering the immense detail and scale of these shapes, the probability of them creating them in a 10 to 12 hour time span under complete darkness is really pushing it. You're not just laying out straight lines, so you need more than a few people to plot your coordinates, For example a 28 pointed star.

Laser lights flashing on and off in a field not attracting attention, I don't think so. You can have all the laser levels you want, but there is no way the crop circles below can be completed in a 10 or 12 hour period not to mention screwing up somewhere along the way. I'm sure they don't have high tech erasers handy. All crop circles are geometric,


Number 1 answers your question, it is because they possess incredible characteristics which is close to impossible to duplicate without complex equipment/planning.

HAARP is as close of a guess as we'll get if we insist all of them are man made.

HAARP is not capable of making crop circles.


The ones in the links are definitely man made, agreed.

The characteristics I was talking about is shown the links I posted earlier.

posted on Jun, 6 2013 @ 08:14 PM
link
I wouldn't be surprised if we discovered some day in the future they are all man-made. Nor would I be surprised if it was proven a percentage (however high or low) are made from non-human intelligences.

Regardless, they are beautiful

Laser lights flashing on and off in a field not attracting attention, I don't think so. You can have all the laser levels you want, but there is no way the crop circles below can be completed in a 10 or 12 hour period not to mention screwing up somewhere along the way. I'm sure they don't have high tech erasers handy

Laser levels are not very visible unless you look into it. There are also infrared models which produce no visible light.

At a walk it would take about 3 hours for a single person to cover that distance (about 9.5 miles) at 3mph, typical walking speed. But of course, it would be slower than a walk so let's slow it down to 1/4 normal walking speed, 3/4 mph. That gives us 12 manhours to squash the crop.

If I have a crew of 8 people that comes to an hour and a half of total squashing time. Let's add 4 hours for layout (which actually could be done prior to the night of the making of the circle) and double the squashing time because it's a complex pattern. My crew can do it in 7 hours. A larger or more complex job, get a couple more people.

There are examples of botched jobs.

Originally posted by peashooter
reply to post by Phage


The ones in the links are definitely man made, agreed.

No. They are not. It's called lodging in the agricultural world.
www.jstor.org...
edit on 6/6/2013 by Phage because: (no reason given)

Like all the good magicians the teams of people that make these designs know how to pull something off that seems pretty much impossible to most people (who are not in the know). There's a few magic tricks ive seen in the past that i dont know how are done, but i dont go around claiming these people are real magicians who can really do magic or maybe aliens!

But unlike magic tricks anyone with even a small amount of technical drawing knowledge knows exactly how these designs are made. With a small amount of maths and a rope and some pre-planning its very simple. Its just a simple pattern stamped out into the ground, its not rocket science.They plan it on paper first and the roughly try to stick to the design. If they make a mistake then no big deal they improvise..who is to know the difference? Its not a complex 3d sculpture or a picture perfect oil painting. They are the equivalent to something you might draw in the back of a maths book with a pen and compass.

There are written guides and videos on how to make them on the net, its no secret.

His designs are much more complex than the designs made in fields. 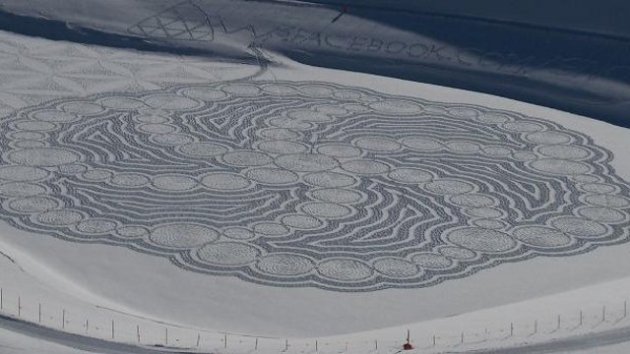 And guess what? Some of Simon becks designs are anything up to 10x LARGER than most of the crop circles you ever see in fields. All this and he has a bad foot!

Some people want to cite the bent stalks in crop circle as if ALL the stalks are bent like that . Well guess what they are not! Its just a handful of deformed stalks out of anything up to a million other stalks that are totally normal. That's why they only ever show less than 20 bent stalks in any pictures you see.

I know lots of people like to think these are made by aliens etc but the fact that they only pop up when the weather is good enough for us fragile humans to be out messing around in fields should at least raise you suspicions that these are just hoaxers having a laugh at your expense. The way each design is only done in fields that have track lines going through them which makes it easy for teams of people to get in an out without leaving any tracks should speak volumes. The fact it only ever happens under the cover of night were people can sneak in and out unseen usually very close to a road should also be a clue to the obvious hoax. Hell even the fact that they are only ever made in crops that a human would find easy to flatten with a board tied to a couple of ropes should give the game away. You never see these designs flattening large tough thorny bushes or groups of trees or spanning main roads or ponds. Have you ever seen one on very even ground? with huge lumps and bumps , hills and ditches? Of course not..you couldnt mark that out with ropes.

We are all looking for evidence of aliens but you wont find it stomped out in a field in the south west of the UK. So dont beat yourself up if you cant work out how people make these, i bet there's lots of things out there you don't know how to make. They are not made by aliens either

Either way im still looking forward to a few pretty designs this year now the weather has got warmer and drier.


Arrogant, low IQ, because I showed you the cases which can't be explained?

Yes, I do notice the tracks, have it ever occurred to you that maybe farmers need to use the tracks themselves?

According to you then these crop circle makers happen to know the binary code message sent out on a radio station 30 years ago too? On top of that make a crop circles using technique similar to a printer, as well as binary code. All without a helicopter/airplane to view the progress? According to you this can be done easily with plank and pieces of rope?

Are there demonstrations where these designs can be achieved within a day's span?

Like I said before, I believe most (ok how about "some", since that irks you so much) are not man-made.

Many agree and this does not mean we are arrogant or have low IQ. I have specifically said I know people can achieve this, but with much effort. Calm down. My point was: the mysterious crop circles with bent stalks, property changes cannot be made by people, at least not proven so far. These are not just a "few" like you said.

I quoted from another site earlier :

"The physical changes (listed below) documented in crop circle plants by Michigan biophysicist W.C. Levengood have been determined by evaluating hundreds of sample plants -- both downed and standing -- taken from inside the overall perimeter of each formation against hundreds of control plants taken at varying distances outside each formation, in several directions. More than 250 individual crop formations from multiple countries, over a 10-year period were examined in-depth."

250 is definitely not a few. Where are the millions that pop up that you are speaking of?

Do you feel better about yourself for saying things like that?

Here's one of the circles you used as an example. I've marked some of the more apparent mistakes. I guess you shouldn't have used that one.

If you look for them you will find mistakes in crop circles.

I love the way they weave the formations posted on Jun, 6 2013 @ 09:10 PM
link
Crop circles are a fascinating topic. The research I have done has led me, thus far, to the conclusion that they are a combination of being both man made, and in a lot of cases, unexplained. The simple fact that they have been around for hundreds of years, mostly in England, throws the idea that they are ALL man made, in the trash can. At least in my estimation.

I quoted from another site earlier

You should know that those papers were not peer reviewed before publication. But they were afterwards. I posted this link before. Did you read it?


The total evidence discussed in this critical review demonstrates nothing but a mere difference in the stem elongation between the flattened plants lying inside the circles and those standing outside it, as we should expect when whatever kind of mechanical force flattens the plants, rope and wood plank included

Levengood displayed bias in the selection of his samples, used no double blind system, and cherry picked data to fit his hypothesis. And still, somehow his papers as used as "scientific" analysis of crop circles.