Black Orb Above my WorkPlace (Strange)

posted on May, 31 2013 @ 12:08 AM
link
Without more info or better footage, I would have to agree with kdog, that the most likely thing is a balloon. It appears to be quite a distance, so a large balloon would be moving slowly at that height and distance. Witht he clouds moving behind it I think it would be very difficult to tell it was moving or not. How long did you watch it for?


It's from japan!! what they doing here anyway ..hagss

Originally posted by WilliamOckham
Here's a little fact for you kids....

Just because its windy at ground level does not always mean that there's wind at higher elevations. It fluctuates and it changes. That said, scale is deceiving and one can't determine anything from a youtube video with a shaky camera. Not this video, anyway. This could be anything...and yes, even a balloon. Can't really say it is a balloon for sure, though.

EDIT: It could be a surveillance drone...the OP works for a company that launders money for a gang in Indonesia that traffics underage prostitutes and smuggles heroin. :-( That's speculation of course....kind of how it would be speculation to say this is alien or anything specific.
edit on 30-5-2013 by WilliamOckham because: (no reason given)


and my boss name "WilliamOckham" the biggest cartel of the universe..


thanks for the report!

in my opinion that is a surveillance drone, if i had to guess, 1-2m in diameter,
i have seen those types of drones too....
they have some really hi-tech gadgets in them...

one of them, is a some sort of device, that vaporizes the humidity around them, creating a cloud camo.

Coming out of a superstore, it was that time of day when sunset is a way off and you get that peach-orange cast to the sky. Across the car-park, I noticed a black object in the air - it stood out due to the colours in the sky. It was over a 100' in the air judging by the lighting pylon (apparently) directly below it.

So I stopped for a few moments and looked at it. It was probably a helium balloon so I walked on.

After taking taking a few steps, the thought struck me that it hadn't been moving at all. Puzzled by that, I stopped and turned around to double-check and it was gone. I looked pretty hard to get a bearing on it again and it was just gone.

I'm 99.9% sure it was a balloon and, in the moments I wasn't looking, it must have burst and dropped. The 0.1% is scratching its head about the stillness and the vanishing trick...

ETA - what time of year and day was the footage taken? Meteorological balloons are usually used at dawn and dusk. Try google to see if there are meteorological offices (weather stations) in the area.
edit on 31-5-2013 by Kandinsky because: (no reason given)

Oh wait—yes I can, this is ATS, where any explanation will do provided it's not the most logical, rational, evidence-based, and/or obvious.

or are you just pink?
better to be green....

posted on May, 31 2013 @ 03:29 AM
link
Sure it was pointed out earlier....but the Initial zoom part was faked using after production image zoom. It gave the impression of a live zoom when it was not. I used this technique when I was doing flash media production....when flash was owned by its main company Macromedia. Also used Dreamweaver by them for my site designs back in the day...mainly on John Denver fan pages...don't judge.

Keep it up, you'll get better.

My advice, work on image enhancing techniques first...it'll show you how to manipulate colors and stuff. You can then use this technique into reverse enhancing photos...

Originally posted by westcoast
Without more info or better footage, I would have to agree with kdog, that the most likely thing is a balloon. It appears to be quite a distance, so a large balloon would be moving slowly at that height and distance. Witht he clouds moving behind it I think it would be very difficult to tell it was moving or not. How long did you watch it for?


I tried to see if the object was effectively moving slowly.

For this, I used at first the leaves/branches of the biggest tree that can be seen to the right as reference point, with the same zoom value, in two screen-shots where both the leaves and the object are clearly visible, at 1080p HD on the video.
The captures were made at 0:01 and 1:07.

Then, I overlaid the two by tilting the second screen capture, making the leaves of the tree matching in both and assuming that there was no (or little) wind between the two frames.

It's clear that the object moved slowly in the sky toward the right and the top of the frames during this 1:06 interval: 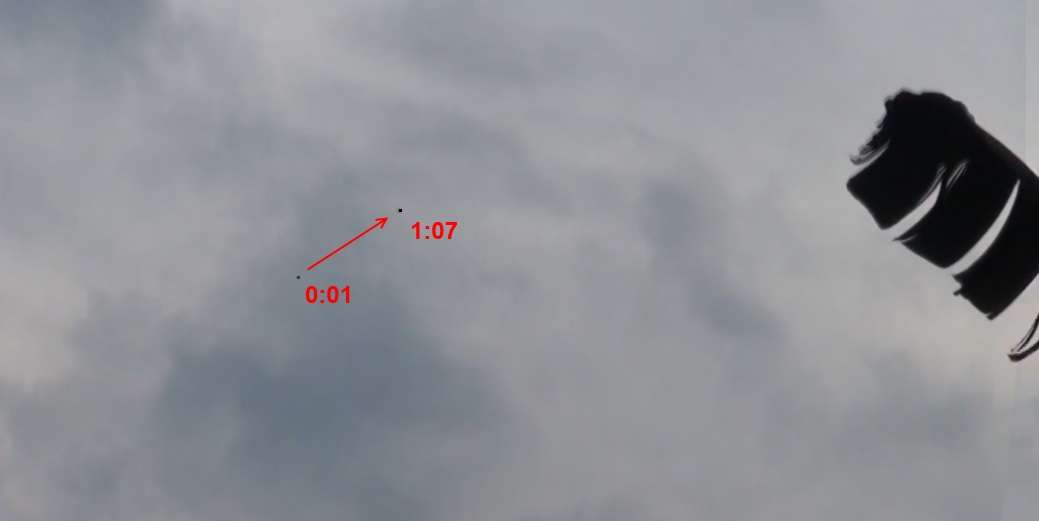 I guess that we can't rule out the possibility that it was some sort of black balloon.

Originally posted by cheesy
ahhh thats your baloon.. i see

It's hard to tell how big the object is from the video, but even if it's bigger than what's in that video doesn't mean it's not a balloon.

Balloons come in various sizes. This one is pretty large, and can even be tethered (It's large enough to support a lot of string), though it looks like the object in your video is moving and therefore probably not tethered:

I don't know what it is, but I don't see any reason to rule out a balloon. If it's as big and as far away as you think, the apparent movement could be pretty small even if it's blowing in the wind. The wind is different speeds, and even different directions sometimes, at different altitudes.


Originally posted by cheesy
reply to post by kdog1982

Not a balloon and if it were it would be a giant balloon. Even though they weren't visible in the same frames, that commercial airliner put the object into scale, as they both appeared to have been the same relative distance from your position. Besides, as you suggest, the balloon would not be stationary. S&F for the video!

How did you determine the size and the distance of the object from its "appearance" on a youtube video when the camera was constantly changing focus? Even if it weren't, you have no way of knowing. With the plane an estimate can be made because it is an identifiable object of known size.

And what would prevent a balloon from appearing to be stationary? You do not know the altitude [no, you don't] or the wind conditions at that altitude.

Several winters ago I was walking the dog on a very cold, clear, sunny day. I noticed a bunch of kids staring at the sky pointing. I looked in the direction they were indicating and was amazed to see a silvery/translucent sphere hanging motionless and silent in the sky. I couldn't have had a better view, yet I still could not identify it... until I looked at the children again. One of them was holding a bottle of bubble soap in one hand and a bubble wand in the other. So the "object" suddenly made sense, and wasn't anywhere near the size and distance I thought it had been. And the fact that it hung so motionless in the sky, wasn't the time of year kids usually blow bubbles, and it had achived such a height without bursting all added to my misidentification.
edit on 31-5-2013 by draknoir2 because: (no reason given)

posted on May, 31 2013 @ 08:45 AM
link
I call balloon, only bases on personal experience because I launch large hellium ballons on a regular basis and monitor wind speeds at different altitudes. When you fly hotair ballons, this is commun practice, we use the wind to stear the balloon so we kind of need the information. So I call " Pi ball" !!

About 10 - 11 years ago, Sat at the back of a bus staring out the window looking at the countryside.
(I live out in the sticks in East Yorkshire UK) Dinner time-ish it was.

Didn't have a cam phone then, couple of mates i was with saw it too.

It was just hovering about 10 or so metres off the ground.
Looked as though it was spinning whilst just hovering there.
Size of it was roughly about 8 - 12 Zorbs if creating one Zorb out of them. (Sorry for the description)
We watched it till we couldn't see it anymore so probably a minute ( We were on a straight road ).
Wasn't there on the way back.

Was thinking of doing a thread on it at some point when i hit me 20 posts!.

Originally posted by cheesy
reply to post by kdog1982

its not moving at all..its windy out there ..and become rain..if its baloon it will "dancing a lot"


The trees are not moving from wind? Just saying

But I also see nothing odd about this object. Is it a UFO yes only because it cannot be identified. But it exhibits nothing extra-ordinary.


I think it may have been (whoever) testing a drone.

I really don't think it was a UFO.

posted on May, 31 2013 @ 10:10 AM
link
These orblike things are being reported all over the world .....
But its a balloon...yaaa rrriiiight.
You self proclaimed experts need some experience.
Theres no way any conclusion can be drawn from the video....its just another interesting possibility.
Dont be so fast to jump on the first one liners band wagon yall sound like parrots.
Nobody alled aliens yet why to hostility.?
Thanks for the film OP

Originally posted by stirling
Nobody alled aliens yet why to hostility.?
Thanks for the film OP

It's not hostility to say that balloons are more common than alien spaceships.

I could ask you why the hostility about the possibility it's a balloon? It's not doing anything un-balloon-like.


I find it interesting that you put "ORB" in your thread title when indeed you have no clue what it is!

Next time be sure it is an Orb before you decide to make a fool out of yourself to get thread attention.

Originally posted by Skywatcher2011
reply to post by cheesy


I find it interesting that you put "ORB" in your thread title when indeed you have no clue what it is!

Next time be sure it is an Orb before you decide to make a fool out of yourself to get thread attention.

An accurate description of form and color without needing to know the exact nature of the object. I'd say the subject title is appropriate and the OP sincere.