I can confirm, that this is a true story, no modifications were made with photo editing tools (apart later on trying to enhnace the photo - color saturation and tones), no CGI & stuff. I don't ask to identify the things nor I need any speculations on the subject of validity.

It is an information, take it or leave it.

This is not my first sighting nor the last I believe... From my personal "history": I had contacts with spirts and other dimmensions, seen things as I tend to describe as unidentified flying craft.

I tend to describe myself as an amateur psychic.

The event I want to share happened around year of 2012 and month of MAY. This was an summer evening with strom comming towards my flat, around 21:00 PM. I finished my work ower desk and went near the window (I live in 3rd floor) to spectate some nice strom views, lightning and stuff. Before going to sleep I've noticed that something emerged from the strom cloud. It looked like a chinese lantern, orange, glowing orb. Went silently in a straight line. Shortly after, second orb emerged from the same cloud and I decided that this is no way natural fenomenon. (Lanterns does not fly in the rain does it?)

At that time I had some entry level photo camera (cannon ixus 990) and tryied to make some photos of the event. At first I shoot with the blitz on. Of course, nothing was captured at first sight in my camera viewfinder. None the less I was struggling to find the best setup to shoot with blitz and without, but no luck with that. One thing though, after first shoot was made, the first orange orb reacted to my blitz. It started to pulsate at some perdictable rate, getting bigger and smaller, thus stared to descend. The second orb which was following the first one - followed the same path. Went to descend about the same point where the first was descending.

Anyhow, this was kind of interesting for me, but time went by (I became father) and I forgot about it untill now.

Now, I played with photoshop, trying to enhance photos and try to find something.. and guess what - it was a success.

To my interest, the photo revealed a lot more than I expected.


This (1) is a crop-off the original enhanced photo.
In a left hand corner you see an object which is kind-off a glowing ring and to the right - some infraredish-kind of light.

None of them was visible by the naked eye.

So the whole enhanced photo is this (2)

And I've added some marks to help identify what was so unexpected for me (3).


The orbs which was seen with the naked eye are 1 and 2.The first Orb was nr.2 and he is kind of in descending "phase". The orb nr.1 is emerged from the storm cloud 10. And by further examination is seen third orb emergin from the cloud 6, which was not seen by the naked eye. Further there is seen much bigger orb 3 and 4. And also the infraredish-kind of light 5. None the less to my surprise - we see the energy orbs too 7,8,9.

From the first sight, It looks like the objects 1,2,3,4,6 are in a formation of some sort.

And of course the originl photo:


During this 'encounter' I did not make an contact, nor felt any upstream energy from the orbs.

So that is my first report.

Also, were shooting through glass there? Through the glass window?
I ask, because a lot of the other stuff you call "orbs" look like out of focus stuff in front of the camera. Like wet drops on a glass window.

posted on May, 27 2013 @ 08:05 AM
link
Those are "orbs", unfocused small particles (dust, water droplets....) close to the camera (except "object 5" which is, like alfa1 said, a hot pixel that should be exactly at the same single-pixel location in every frame): 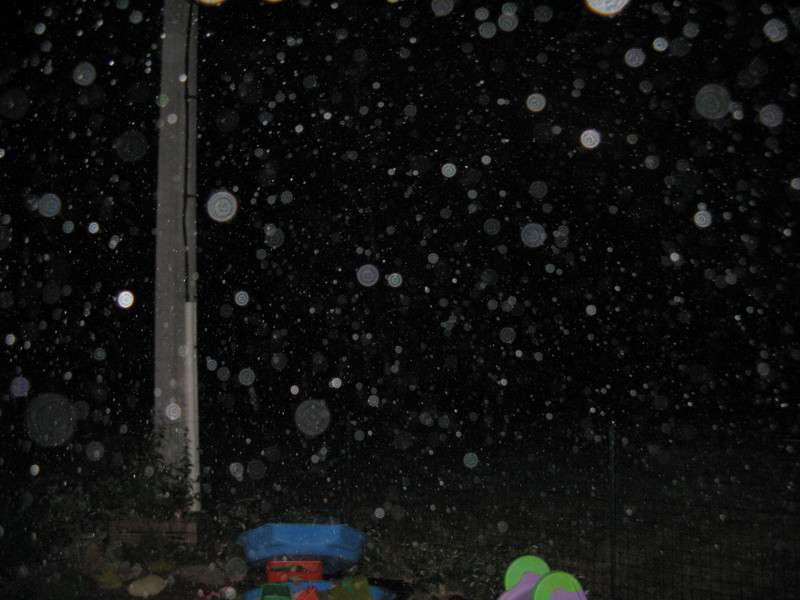 Nothing more, nothing less.
edit on 27-5-2013 by elevenaugust because: (no reason given)


You see ufos, I see stars in the cloudy night sky.

I was just getting ready to post that. Sometimes I wonder if threads like this are serious or not. Obviously the OP didn't see these in the sky by his own admission. So, let's take random photos of the front yard at night with some out-of-focus water droplets and see if anybody thinks they are aliens.

Originally posted by _BoneZ_
So, let's take random photos of the front yard at night with some out-of-focus water droplets and see if anybody thinks they are aliens.

Yes, the last example in my post was taken in my backyard by throwing some talcum powder in front of my camera.

The simple point is this.
When you take a shot at night, your camera senses low-light, so it uses its flash.
Flash, however, doesn't just light up the subject of your shot, it lights up every single other object between the camera and the subject too. Many of those objects will reflect light back to the camera (e.g. dust, snow, rain, even just mist in the air is enough, or... if you're standing in your back yard with a full bottle of the stuff, talcum powder works too (apparently)).

Orbs do not equal ufos. They equal people who don't know how light sources work.

First, he sees 2 Orange orbs exit a storm cloud....but doesnt describe where they go or anything.

Second, he takes random photos of said storm area, but with no orange orbs in view anymore, but confuses other "lights" not seen at the time of photograph as something.....at least I think that's what is meant.

I would think the orange orbs are ball lightning, or static electricity plasma balls.

They probably dissipated before, or while, he grabbed his camera.

All speculation on my part, of course.

1. No, English is not my first language
2. The shot was made trough open window
3. The rain was only around at storm cloud (10), not somewhere near to cause "fake orbs"
4. The evening was not yet full-dark, there was some light (got blurred photo due long exposure)
5. No known camera glitches or accidental light source could produce "fake" orb near straight line formations with as looks like empty inner center and bright outer ring
6. The hot-pixel might be.. have 5 more shots, will see what i get.

Thanks so far for your input.


I wish people would post the exif data with these types of pictures so we have info in all the important data of the picture.
The reasons offered by elevenaugust & alfa1 cover what is shown in your pictures small camera sensors like the one in your camera don't work well in low light and I would not use flash for a night time sky shot.


These are originals, not modified.

Talking about hot-pixel - looks like it. It is there on full zoom in every shot.
edit on 2013.5.27 by amfis because: (no reason given)


Hi If you link to original pictures I can see the exif data from a browser plugin the problem happens when you edit, crop pictures sometimes the exif data is missing.


Tripod for cannon ixus? lol, nope. Was trying to hold stead in hands while I was cuddling to the window frame, but still - someting at least.

Originally posted by amfis
reply to post by wmd_2008


Tripod for cannon ixus? lol, nope. Was trying to hold stead in hands while I was cuddling to the window frame, but still - someting at least.


You do get SMALL tripods

posted on May, 27 2013 @ 10:40 PM
link
We may have had rings before and some red orbs posted at ATS.
So you have unknown objects at least explaining those glowing orbs at the very least.
As for a hovering vehicle all you got is a Foo ship at the very least.
There have been better witnessed like Ovals and Wings and Triangle and a Sombrero and
the flat dish ship of Rex Heflin but all you got are perhaps Foo orbs.


Well.. this is at least something with an evidence captured in photos. This is not made-up I assure you. As for further events, I believe I can deliver more.

The place where I live is somewhat active of such events. Thus now I got proper DSLR for the job
edit on 2013.5.28 by amfis because: (no reason given)


Well.. this is at least something with an evidence captured in photos. This is not made-up I assure you. As for further events, I believe I can deliver more.

The place where I live is somewhat active of such events. Thus now I got proper DSLR for the job
edit on 2013.5.28 by amfis because: (no reason given)

Take anything TeslaandLyne says with a very large pinch of salt, you may now have a DSLR but you still need to know what you are doing

Originally posted by amfis
Yep, I agree with you.

So what camera did you get and what are you trying to do with it, many members on here are keen photographers some even semi pro or full time professional photographers.

I have done it as a hobby for 30+ years so if you want any tips just post.

Originally posted by amfis
I had contacts with spirts


Thinking that you had contact with spirits and actually having is a big difference outside of your head.

I tend to describe myself as an amateur psychic.


I tend to describe such thing as either made-up or delusional.

And when it comes to your photos:
* Hot pixel
* Spots on the lens or a screen infront of you.