That's very interesting. I don't personally lean the Von Daniken way on this. I think we had previous human civilizations that matched or rivaled our current one.


I think it's more than a few thousand years ago. Ok, I'm gonna diverge from the path here a second as to explain my thought process.. Ok, let's take the Sphinx for instance. For it to align to the Leo constelation, we would have to turn back the clock around 10 to 12 thousand years. But that was the end of the last Ice age, lots of flooding, rain...all kinds of stuff. Not the ideal conditions to build anything. So lets turn back the clock even further to the next alignement. That's 36 to 40 thousand years ago. That time line correlates to so many things in the ancient world. Any thing from the erosion on the phinks to the migration of the Nile towards the east. Now, if the Nazka lines could be prooven to be as old as those, that would change the world history even further. I love the Nazca lines. Too bad we know so little about them. S & F


Originally posted by TheMindWar
Some nice pics there thanks

Also, I heard that one of the most unusual things in Peru is where a very large area at the top of a mountain has been litterally sliced off, have you heard of that?

Are you meaning this...

And the historians and archaeologists contend that these were made as sacred paths leading to points of worship!! Doesn't that sound pretty dumb? Does this look like a sacred path? Did they need to slice off the top of a hill for making a path that can land a Jumbo? And where does the so called 'sacred' path lead to?
edit on 5-9-2012 by OrionHunterX because: (no reason given)


That sliced off mountain top has allways been the most compelling to me. Operating off memory here, but I believe no evidence has ever been found of the literally hundreds or maybe thousands of cubic acres of earth that was sheared off the top. No debris field, where did all the dirt go?


This has always been amazing to me as well. If it indeed was made by hand, what kind of manpower and how long would it have taken to take that mountain top right off? It's no easy task for sure, even for todays standard. 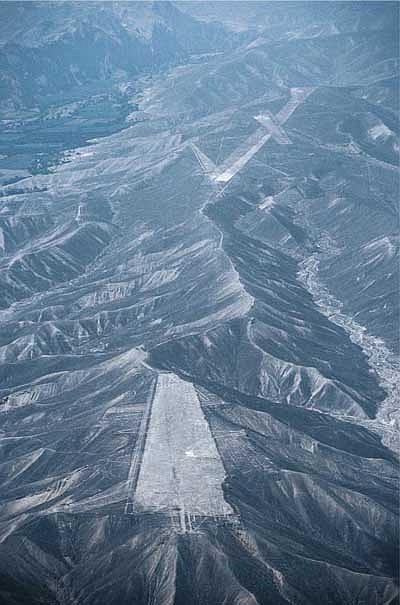 
The lines never stop amazing me, Dang they look like landing strips.

posted on Sep, 5 2012 @ 10:04 AM
link
Those lines are perfect even when crossing over mountains, rocky terrain, dried rivers, etc.

These were done from space or at least at cloud level.

But I'm waiting for someone to come in this thread to rant how primitive humans did this....

posted on Sep, 5 2012 @ 10:07 AM
link
Good old Nazca lines, thanks for bringing this up again! As fascinating as they were when i first heard about them.


I have REALLY big problems imagining thousands of people thousands (?) of years ago literally flattening mountain tops...i mean the mind-boggling starts already thinking about how they were done. The other stuff, their purpose, is an entirely different story.

The other amazing thing here, we're dealing with some ancient civilization/culture and we know not the slightest thing about it.

The area that has fascinated me the most in the region has been the "Band of Holes". One could imagine that an Alien race/civilization came to Earth to mine for resources and using those sheared off mountain tops as large landing platforms while they excavated some exposed vein of Gold or some other type of rare mineral/material... 
It would be cool if there was a map showing ALL the lines in one pic to get a better feel of patterning if possible.
reply to post by SLAYER69


Wonder if there is a mineral signature beneath any of the lines like these?
edit on 9/5/12 by Ophiuchus 13 because: (no reason given)

Originally posted by Iamschist
It is difficult to maintain a straight line, I wonder how they did it, no survey equipment, no views from above, how did they do it? My town can't run a sewer line under a highway and meet up on the other side, seriously, they have tried 3 times.

Kind of easy actually. A simple method would be to measure out the area, then make a scale grid on which to draw the patterns, like 10cm = 10 metres or something. You certainly do not need aerial view to make such things, only basic maths.

The mystery is not in how they were made but in what was their purpose. Probably religious beliefs. But then it reminds me of the cargo cults on remote islands in Pacific, how the natives would make rough land strips after seeing planes and meeting civilised troops and so on, they thought they were like gods. Assuming some aircraft was involved, I'm more likely to think it was humans not aliens. Too little credit is given to ancient people's technology. This is of course pure conjecture.

Yep! This is only about the lines. I wanted to stress that the lines made DO NOT follow the terrain configuration - no ups and downs into valleys and up hills which would otherwise make them look wavy and meandering. These run absolutely straight over them!! That means the lines were drawn using complex geometry so that they look arrow straight from above like they were drawn on a flat piece of land!


These images lead one to suppose that the lines were actually drawn from somewhere [high] above the surface of the earth - similar perhaps to what we see with the "real" crop circles having possibly been drawn by means of high energy drawing tools such as a laser or microwave energy.

knowledgedesired
+4 more
posted on Sep, 5 2012 @ 10:34 AM
link
Until goverments stop covering up the findings we will never fully know the truth of these great structures on OUR planet earth. History has been re-written over and over again for agendas.

We live in a society that small groups of people make decisions about what the rest of us are told to "preserve" a certain religon or belief.

What ever happend to TRUTH?

Who cares if the truth hurts another group or religon at least it is the truth.
Humanity will never move forward if information is controlled and supressed.
How can we learn from our past mistakes if they are constantly being covered up and mis-represented.

I for one would rather be told that a giant alien took a dump and we crawled out of it...
If that was the real truth... Humanity deserves truth.
edit on 5-9-2012 by knowledgedesired because: sp

Originally posted by SLAYER69
reply to post by OrionHunterX

The area that has fascinated me the most in the region has been the "Band of Holes". One could imagine that an Alien race/civilization came to Earth to mine for resources and using those sheared off mountain tops as large landing platforms while they excavated some exposed vein of Gold or some other type of rare mineral/material...

Thats crazy cool! It looks like a huge machine similar to a rototiller laid out a track in digging up the earth.

Originally posted by MasonicFantom
Primitive humans did this.


Looking at that long range photo, is it just me or are those two/three flattened areas joined by the ridge?

Also is there not a short pathway entering the bottom of the nearest flattened area?

Not knowing the scale, the whole assembly looks rather large, but, what about a birthing area at the bottom, people line the edges of the first flattened area, torches, sounds etc etc..and the newly born is carried to the ridge and then along it, this could represent life (?) and the further flattened area could be death, with two courses available, (Heaven/Hell).

Maybe by the time the procession carrying the new born to where the two flattened areas divide, a decision has been made as to the possibility that the newborn is to be the new leader.

How any of this is connected to the other lines on the plains or even how the flattened areas were created I have no idea.

Modern landscape engineering uses a cut and fill method to minimise the need to remove spoil. Could this have been the process used, but where did the people live whilst all the work was going on?

In Wiltshire, associated with Stonehenge, there is the "Cursus", which it has been suggested was used as some sort of procession-way. From the air, I suppose it could look a bit like the flattened areas in the OP's photo. So maybe there is some precedence.

I have to agree that the area is filled with mystery.

perfectly natural if you're a brain dead idiot

perfectly natural if you're a brain dead idiot

To which point are you referring?

My massive question is WHY? WHY, did they feel the urge to flatten these enormous hilltops? It doesn't make any sense. The animals they depicted etc. can easily be dismissed as appreciation of nature but flattening a hilltop? For what? Imagine the manpower needed to do such a thing!

Was it just so they could get a good view of the surrounding area? The mountains alone would have filled that criteria. I would conject that they were mvery neat miners but then that begs the question you asked, where did all the rock go?