A group of Russian scientists plumbing the frozen Antarctic in search of a lake buried in ice for tens of millions of years have failed to respond to increasingly anxious U.S. colleagues -- and as the days creep by, the fate of the team remains unknown.
"No word from the ice for 5 days," Dr. John Priscu professor of Ecology at Montana State University, told FoxNews.com via email.

Honestly, this whole uncovering a frozen lake literllay lost in time is the most captivating story to me over the course of the last year. (Yes, even with the killing of Bin Laden and uprisings across the world)

I hope they are just out-of-range.

Will update as new becomes available.

This is a very interesting subject you are right, what with the Nazi's sniffing around that area too way back in the 40's and news blackouts surrounding what goes on on this expedition it all smells rather dodgy.

S&F, I am now subscribed to your thread and am looking forward to your updates, thank you for taking time out to delve into this, the lake is covered in other threads but this is new news that communication has been lost,

posted on Feb, 2 2012 @ 04:53 PM
link
Hmm interesting catch I've read through a few threads here about the nearness of a breakthrough into the lake but hadn't seen anything on loss of contact with the team doing the drilling. There was some speculation that the lake water could emerge from the drill hole under considerable pressure, hope they didn't go a blow themselves up. Probably some old chilly Dagon came up for a snack

"We are terribly interested in what they find," Alan Rodger, a scientist at the British Antarctic Survey, told FoxNews.com last year. "This is a lake that we don't think has been exposed for 15 million years."

It would also be nice to explain why they THINK the lake hasn't been exposed to air for 20/15 million years, instead of just saying it.

I hope it helps. will be interesting to see what is found even thought the truth i'm sure will be hard to come by.

I've seen this plot before....

posted on Feb, 2 2012 @ 05:47 PM
link
Yup, these guys going missing should stir the world into an immediate "all hands on deck" reaction. Going missing on any journey in that part of the world is in and of itself quite dangerous. Opening a 20 million year old lake and going missing is bizarre and concerning by any standards. And yes this was a movie!

Reccomendation - go for it see you in the summer comrades

Originally posted by Enlightenme1111
It would also be nice to explain why they THINK the lake hasn't been exposed to air for 20/15 million years, instead of just saying it.

Last I heard that was 420,000 years based on the ice core samples but I guess some 'scientists' think its 15/20 million years

But the ice cores have shown one thing... forget global warming buy warm clothes and firewood because your going to need it. This graph below is drawn from the data gathered from the Vostok ice core samples and, unlike the tree ring data, is scientifically sound and uncontroversial. Looking at the above graph, there have been six periods in the last 415,000 years when global temperature exceeded today’s temperature by as much as nine degrees. 10,000 years ago, the global temperature was five degrees higher than today. 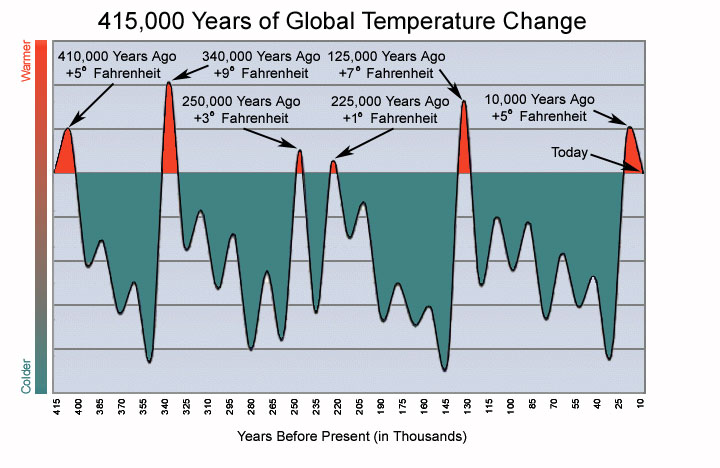 Hope they are all fine and not chasing husky dogs around trying to shoot them!!

ETA: I do enjoy your Threads Calgarian
edit on 2-2-2012 by kimish because: (no reason given)


There are other threads referring to Vostock but the OP in this case is referring to the Scientists vanishing themselves and not the lake. Just adds to the story buddy, I am pretty sure the case of losing contact with the scientists has not been posted yet

posted on Feb, 3 2012 @ 05:24 AM
link
Kimish there are but not covering the missing team, which imo is really interesting and quite frankly sounds like a movie!!! (oh and no one likes a wannbe mod )

So here are a few scenarios buzzing around in my head

1. how ever they were communicating with the outside world has stopped working (boring!)
2. they have released some kind of gas, known (methane?) or unknown that has poisoned them all
3. they have released some kind of unknown virus, killing them all or at least making them too ill to communicate
4. Somehow the piercing of the ice bubble that is above the lake caused the whole thing to collapse in on it's self, taking the team and base with it. This air bubble or dome was created by the heated water and is apparently a couple thousand feet high, that's a long way to fall if it all caves in!

The Lake, which is still liquid and not frozen, has been isolated under the ice sheet since anywhere from 13,000 to 14 million years ago, depending on who you talk to (thus, who's estimating precisely "when" the ice last completely covered the Continent). The water in the Lake (determined by surface thermal scans) ranges from 50 to 65 degrees F, clearly indicating a sub-terranean heat source. In addition, the whole Lake is covered by a sloping air "dome" several thousand feet high that has formed (from the "hot" water melting the overlying ice) just above the Lake's surface.

taken from here, linked to a few posts above

5. somehow the piercing of said 'air bubble' and the breaking of the sealed environment caused the air, then the water to be forced up the whole, creating a huge giza and burying the team and station in ice (ever seen what happens to boiling water at these temps?)

just some thoughts from an un educated mind!

posted on Feb, 3 2012 @ 05:45 AM
link
Would love to have pictures when they go down
or even myself go down there
and be the first human in 20 millions yrs to enter that place
maybe many new or old species will be uncovered from a paradise place
it is so deep that it might not be that cold
many creature can survive


Also would the battering we are having/had from the recent solar activity disrupted the coms maybe and for those conspiracy nuts among us, maybe someone didn't want them to find what is actually down there and wiped them out before they got that far


excellent point re solar activity... and aren't we all conspiracy nuts!

What could be a very serious concern is this :

The glacial ice and the re-frozen lake water above Lake Vostok also contain methane hydrates, and it is suggested that hydrates introduced from the glacial ice may have accumulated within the lake over time.

Some believe there is enough methane in the form of hydrates—methane locked in ice—to supply energy for hundreds, maybe thousands, of years.

Industry has concerns about drilling through hydrate zones, which can destabilize supporting foundations for platforms and production wells. The disruption to the ocean floor also could result in surface slumping or faulting, which could endanger work crews and the environment.


Hope they are ok and that this is just comm failure.

S&F. Will keep an eye on this thread for updates.


aha! so theory number 4 sounds a bit more realistic! (see my post a few posts up)

Originally posted by Enlightenme1111
Found a glaring contradiction in the article.

"We are terribly interested in what they find," Alan Rodger, a scientist at the British Antarctic Survey, told FoxNews.com last year. "This is a lake that we don't think has been exposed for 15 million years."

It would also be nice to explain why they THINK the lake hasn't been exposed to air for 20/15 million years, instead of just saying it.

I think, TBH, no body knows and anyone putting a figure on it is just stupid, IMO!
edit on 3/2/12 by jrmcleod because: (no reason given)