WAR: Where is Adnan el-Shukrijumah? 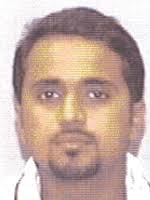 One of the most sought after Al-Qaeda members, Adnan el-Shukrijumah is still plotting harm against the US. He has been tied to numerous plots including, blowing up the Panama canal, dirty bomb threat, helicopter attacks etc, and is considered one of the new leadership of the terrorist group. He was at a terrorist summit in March of this year in Pakistan, and while many of those who attended, have been apprehended, el-Shukrijumah remains a fugitive. Take some time to review the information posted below and keep your eyes open to finding this suspect before he can implement whatever plans he may have.

www.time.com
It was a gathering of terrorism's elite, and they slipped silently into Pakistan from all over the world in order to attend. From England came Abu Issa al-Hindi, an Indian convert to radical Islam who specializes in surveillance. From an unknown hideout came Adnan el-Shukrijumah, an accomplished Arab Guyanese bombmaker and commercial pilot. And from Queens in New York City came Mohammed Junaid Babar, a Pakistani American who arrived with cash, sleeping bags, ponchos, waterproof socks and other supplies for the mountain-bound jihadis


Please visit the link provided for the complete story.

Rewards for Justice Poster on this subject. He was raised in Miramar Florida, the son of a Wahabbi teacher, this man is also a trained commercial pilot who speaks numerous languages and has passports from numerous countries.

"Jafar the Pilot," leader of al Qaeda’s post-9/11 ambitions for a nuclear attack, is on the move again.

One of the world’s most wanted terrorists, with a $5 million bounty on his head and a suspected desire to attack the United States with nuclear weapons, has been traveling across the Middle East recently with relative impunity, courtesy of a Saudi diplomatic passport.

Al-Qaida terrorist ‘Jafar the Pilot’ on the move again