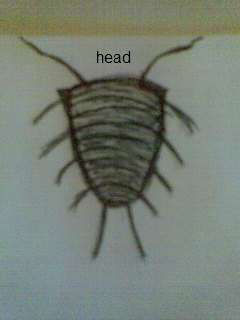 This is a drawing of the strange being that a friend of mine have seen in Toulouse, a French town, back to 2009 summer.

"I live with roommates in a house. There is a ground floor with a terrace and an upstairs. The neighborhood is quiet and we have the cool feeling to live in the countryside, while we are close to Toulouse downtown. Around the house, there are many gardens. One night I lay awake in the lounge, the door patio wide open, I was watching a movie in the company of Guinness, my lovely cat. Suddenly we saw a black mass crawling very quickly under the carpet, coming straight from the outside At first, I was petrified. At the same time, the cat immediately jump outside, taking the same exit. A few seconds pass and the "thing" comes out from under the carpet and leaves the room toward the kitchen. That's when I saw it at the better angle. With hindsight and some research, I can say that it looked like a trilobite. (of course, it can't, but this is the better comparison I have found so far) 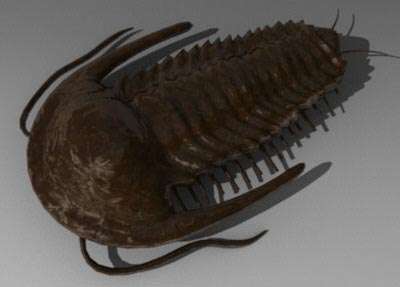 This thing (I took some references size with the carpet) was about 30cm (12 inches) * 20cm (8 inches) of size, and the color was glowing black. Then, I took "my courage in both hands" and went into the kitchen. Nothing. I searched everywhere. Incidentally, I took a broom, just in case of ... I searched the entire ground floor. Nothing. Not even a trace of his passage. Then I sat down, confused and somewhat frightened. "And if the creature was on the floor?" So, I went up, the rooms are closed, I searched the bathroom, nothing. I went down, more confused, went around the terrace, nothing. Incidentally, I see Guinness sitting in the neighbor's garden, looking at me, like saying "Is this thing still there?"

We haven't found anywhere any plausible explanation for this apparition, in spite of our searches in some cryptologist forums.

I'm still in contact with my friend and he will be happy to answer any questions that I will translate for him for you, as well as his answers here. Hissing Cockroaches are often kept as pets because they're BIG Could be an escaped pet link
edit on 8/3/11 by Versa because: (no reason given)

Well, here in France, we haven't such super-sized cockroach!!


No but people do keep them as pets and they do escape and turn up from time to time. I found a 18 Corn Snakes in a quarry near me that the local zoo took off my hands (Im in the UK) pets escape and sometimes breed

Seriously though, I don't doubt your friends story at all but I wouldn't be surprised if it turned out to be a cockroach. Gives me the heebie-jeebies just thinking about it.

I was rather thinking of some sort of "Scutigera coleoptrata", which could explain its velocity, but not its size. 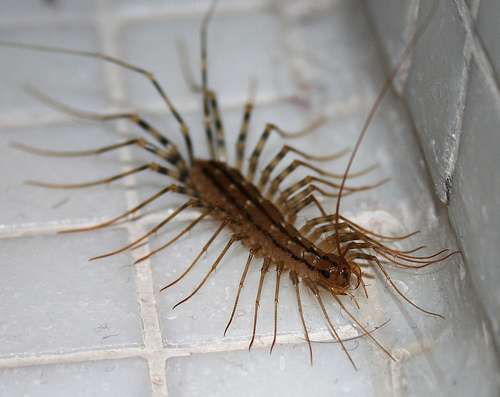 Anyway, my friend should have the ability to recognize a cockroach if that was it, IMHO.

posted on Mar, 8 2011 @ 05:52 PM
link
I don't know what your friend saw but trilobites were aquatic and have been extinct for millions of years.

Keep in mind if you see a 10cm Beetle cruising through your house when you're used to nothing bigger than 2cm you could very easily remember it as being 20 or 30 cm. This isn't a function of how smart or reliable a person this relates directly to "Zoot Alor" factor in remembering measurements.

I wouldn't trust estimated measurements based on a surprise observation by anyone short of a professional fighter pilot, detective or nother person for whom observation is critical and trained. Even then I would be skeptical.

I see where you're coming from, but I can assure you that my friend, shortly after the event, took some measurements using marks on the carpet as scale reference and with a ruler.

Some precisions:
- My friend was about 3m to the being
- This thing stayed under this carpet for +/- 30s before going straight to the kitchen
- The cat immediately looked at it when it appears firstly at the French window and at the same time this thing went under the carpet, the cat jumped at the window.
- When the cat came back 3/4h after, she looked everywhere like if he was searching for something.
- My friend says no way it could be a cockroach.
- Another strange thing is that this thing have to somewhat "walk" above an obstacle: 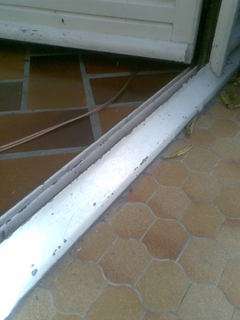 posted on Mar, 9 2011 @ 04:41 PM
link
Well, I'm no expert on the arthropods of France, but this sounds to me like a bloody big woodlouse. A roach sounds like a good explanation as well. Remember, memory distorts over time, so I highly doubt it was a foot long.

posted on Mar, 9 2011 @ 07:50 PM
link
I've been spending my free time scouring the internet for possible giant bugs. It wouldn't have to be from France because there are a ton of people that collect odd bugs. I can't find anything that large.

I think a giant water bug looks close, and many other smaller beetles Please ask your friend to stand by to capture it if they see it again. A bucket over the top should be good. I want to see a pic!

Many thanks jinglelord for your time on this strange case and, yes, be sure that my friend next time will jump on any camera what will be around!

posted on Mar, 10 2011 @ 07:05 AM
link
I live in Toulouse and have never seen anything like you have described. The only thing I can possibly think of is that it is an escaped exotic pet of some description.

This crab is very ancient, and truly looks prehistoric.
Technically it's not even a crab, but an arachnid, closer to scorpions and spiders.
Although native to the East and the Americas (where they are used in Delaware as eel bait) they have been kept and spotted in Europe by coasts and rivers since the 1500's.
Arguably some paintings show them even earlier.
Well they look exactly like a Trilobite.
People may also keep them in aquariums or import them as ethnic cuisine.
Perhaps one escaped, and you saw a smaller specimen?
If you live fairly close to a river or shore I think one might have made an unintended dash through your house.

I also thought (sounds incredible in Toulouse, I know...) of some new undiscovered species...

New species or subspecies are still found in France, some of which are endemic. "Lithobius delfossei" Iorio & Geoffroy, 2007 and "Lithobius subtilis geoffroyi" Iorio & Berg, 2007, were recently discovered in the MNHN collections. They come in addition to the hundreds of known taxa (of which 20 are endemic [Ventoux Mount and Lure Mount]).

Thanks for the research, halfoldman, we already thought of this strange creature, but not sure if in France, far away from the sea and in these areas it's possible.

With the import of ethnic foods and exotic pets you'll be surprised what you can find.
There are allegedly wild kangaroos in Germany, and big cats in Britain are pretty much proven.
But the Horse Shoe Crab has been around since at least since 1517 in Europe, although populations are small and elusive. They could also live in rivers.
My guess is that it escaped from a neighbor, or an Asian restaurant.
However, I also have a personal suspicion that there is a native European form that has never been scientifically confirmed.

posted on Mar, 11 2011 @ 03:01 AM
link
I'm new to the forum, but my guess would be a form Scutigeridae (house Centipede) which I have seen and caught up to 4in. long or some type of Isopod. Google the giant Isopods they have found in the deep ocean, there aren't any accounts of that size on land, but the Isopod family can still grow pretty large. regardless, it's probably a harmless animal.