"It is our contention that the US NAVY is in charge..."

Hey it's a conspiracy site... not a documentary and it's our opinion


And you don't see the irony in that statement?

posted on Aug, 15 2009 @ 02:07 PM
link
Here is a picture that may help to better explain the electrodynamic tether concept to the more visual learners that we have on this site (as it can be tough to grasp at first, visual aids are often helpful): 
Turns out, tethers have also been considered for use with various Space Planes - more notably HASTOL (Hypersonic Airplane Space Tether Orbital Launch). But this would also make the Black Horse even more valuable as a launch system.


Abstract: The Hypersonic Airplane Space Tether Orbital Launch (HASTOL) System is an efficient approach to transportation to orbit. A hypersonic airplane delivers the payload to the tip of a rotating tether at speeds well below orbital speed. The tether transfers momentum to the payload, releasing it into a desired orbit. The paper describes the concept, design efforts, a rendezvous and capture simulation, and prospects for commercial launch.

Introduction: Tether analysis and orbital experiments have shown the potential for tethers in orbit. Recent work in the MMOSTT study has led to the design of a tether system for transfer of payloads from low Earth orbit (LEO) to geostationary transfer orbit (GTO). The HASTOL concept represents a growth option for tether-assisted orbital transportation that increases the importance of the tether-assist and reduces the cost of the launch vehicle. *The SpacePlane itself could use a tether as a propulsion system.

Originally posted by hexagramfifty
I think people want to believe that this is the same Space Command that flies starships within and possibly beyond the solar system. That they send astronauts to bases on the moon and mars and perhaps enlist beings from other planets.

When all this only points to everyone involved in launching the latest spy satellites or laser or kinetic or railgun satellites. Pretty boring.

Hey I have seen a Black Triangle. I cant provide any tangible evidence other than my Word which to you and many others may not amount to much. They exist and someone down here on the blue marble is making them...

A little Birdy told me that Boeing use materials from this company:

... when they do work for ALLAYS Naval "com systems" ...something to do with Electrical properties

I'm not sure if you were asking "tongue in cheek" , but Velocitas Eradico translates as "Speed Destroys"

Originally posted by hexagramfifty
I think people want to believe that this is the same Space Command that flies starships within and possibly beyond the solar system. That they send astronauts to bases on the moon and mars and perhaps enlist beings from other planets.

When all this only points to everyone involved in launching the latest spy satellites or laser or kinetic or railgun satellites. Pretty boring.

well,,its interesting to know they have their own astronots,,,,and have access to these reports.

i dont think we are exploring our solar system in anti-gravity crafts,,,but have zipped around outside out atmosphere and zapped around the moon, on ocassions,,

this is top military stuff/secrets....

and im ashamed to say but should be,,,it'll be known in some years from now so there will be truth!....

I was more impressed with the X Band radar that is keeping an eye
on everything off the coast of Alaska.

posted on Aug, 15 2009 @ 03:23 PM
link
WOW!!!
Nice thread Zorgon! You have some really cool stuff on here. You are definitely on the right track here. I have a feeling some of the laser systems you are looking for are in So-Cal.

I noticed one of the pics you posted has a guy not wearing his face mask, Safety glasses, and has his socks showing. This is asking for trouble. Had I been there, I would have smacked him on the back of his neck, asked him to bow his head in shame, exit the cleanroom, and go through the retraining program again!

Just one sneez, or some pocket lint can cause some problems. Imagine launching something and realizing a system has shorted out shotly after deployment because some guy not wearing his face mask accidentaly left some snot somewhere on the robot. LOL!

I know...I know...Nasa would be more careful and that is all just my imagination.

Zorgon, Exube, keep up the great work and thanks for sharing all your research with us!!!!

zorgon, you are onto something, that's for sure.
Unfortuanately, you've only got the tip of the iceberg here with this, it goes a lot further.

A year ago a DoD chap popped in and spent three days 'chatting' with John and myself... when he left he said "You only have the tip of the cat's tail" I replied... "Maybe, but we are pulling hard enough the the cat has turned around and noticed."


Are you ready to delve into the rabbit hole? 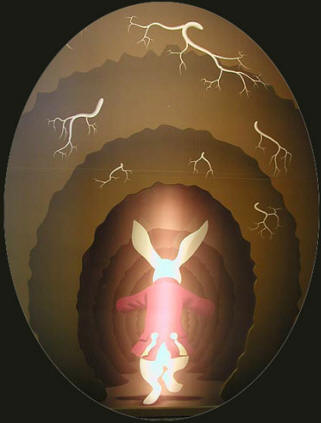 I'm going to give you a few tidbits, and let you explore them on your own.
I just don't have the time to write it all out right now.

Yeah well see... that is the problem... that is why I am only on the tip of that iceberg... everyone wants me to do the legwork

Now THAT scares me...

I think you should ask a Moderator to move this thread to Military/Government Projects.

Yeah maybe I was debating on that when I posted

posted on Aug, 15 2009 @ 03:38 PM
link
Very good informative post. Its way better than the run of the mill nonsense political environment which seems to be taking over ATS.

Since I have your permission...I would like to add a few tidbits, and any hungry can devour.

Thats all for now folks!

A laser that never runs out of shots.... For decades, scientists have been slowly working on a laser that never runs out of shots — and can be "tuned" to blast through the air, at just the right wavelength.

For most of that time, all they could get was a laser at lightbulb-strength. But in 2004, researchers at the Thomas Jefferson National Accelerator Facility finally managed to assemble a "Free Electron Laser," or FEL, that could generate 10,000 watts of power. Now, the Navy has started an effort to design and build a new FEL, 10 times as strong.

That would bring the laser up to 100 kilowatts — what’s considered the minimum threshold for weapons-grade. But it would also be just a stepping stone, on the way to an energy weapon as powerful as any produced.


Point being, if the laser can melt a missile - it can transmit power to a satellite and do it whilst at sea; far away from prying eyes.....

Originally posted by LSWONE
I know...I know...Nasa would be more careful and that is all just my imagination.

You mean the same NASA that forgot to add a 20.00 circuit breaker (errr maybe 2,000.00 for them ) and lost a 100 million satellite because thei 'scientists' said "Don't worry, we don't believe there will be much power generated"

Aren't you glad your 'independent'?

You are simply amazing and this thread is further proof.

I'll likely soon be banished to the canine quarters for the balance of the weekend since I had promised my spousal unit I'd finally mow the lawn.

However, I suspect I'll be reading all your juicy links instead. (Luckily I added a repeater/ booster a while back to my home wifi and I get a fairly strong signal in the doghouse.)

You are the reason I have recently formed many conclusions regarding moon, space military etc. which I threaded recently.

Only to humbly add another germane link:

You are the reason I have recently formed many conclusions regarding moon, space military etc. which I threaded recently.

Only to humbly add another germane link:


With regards to the Vision 2020 file; Did you see which part of the world the Laser is attacking... Poor Iran. They totally have it coming.

Well, yeah. That sounds good BUT now we are talking "line of sight".
Due to the curvature of the Earth you will need to get your Navy destroyer
up out of the water. I guess you will need a Gravity Wave Caterpillar
Drive to do that.

Well, yeah. That sounds good BUT now we are talking "line of sight".
Due to the curvature of the Earth you will need to get your Navy destroyer
up out of the water. I guess you will need a Gravity Wave Caterpillar
Drive to do that.

Perhaps you should write the NAVY (and everyone working on SELENE) and let them know of your concerns.


Thank you zorgon. Finally a post from a truth telller and someone who isn't a bull#ter which seems to be all to common these days on ATS.

I would like to think we're finally getting closer to those intials that Bob Lazar mentioned in regards to his work at are 51; " USNAF " Not that it would mean everything he said was actually true.


The Battle of Eastleigh, England. U.S.N.A.F.

The only mention I found for Bob Lazar and USNAF is one I made on a tinwiki thread on Bob Lazar.

Talk about your conspiracies.

I guess I may have been mistaken and delusional.

The space command logo looks so cartoonish that it seems like disinformation. It reminds me more of Space Angel and a few others.