posted on Sep, 23 2005 @ 01:43 PM
link
At the September 2005 International Aviation Expo held in Beijing, Shaanxi Aircraft Industry (Group) Co. Ltd unveiled its Y-9 multi-purpose transport aircraft design. A substantial redesign of the Shaanxi Y-8 (Chinese copy of the An-12 Cud), the aircraft was initially revealed to the public at the 2002 Zhuhai Air Show under the name of Y-8-X concept transport. It is said to be comparable to the U.S. Lockheed Martin C-130J transport in general performance.
source

Sounds like their building a good transport plane, so they can deploy their military faster . Wow China is really building up!

posted on Sep, 23 2005 @ 07:39 PM
link
Aproaches the C-130J and A-400M in some aspects and surpass them in some too, stated by www.sinodefence.com. I like it but it doesn't compare with the AN-70 which China could definitely get (AN-70 surpasses anything in its group). Its good to be giving orders in billions to China's own aviation industry instead of foreign companies. Great.

Look at the tail section and the cockpit 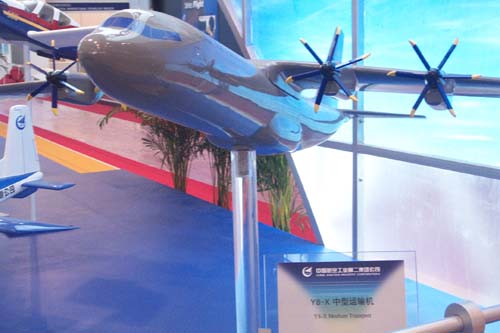