It seems the world remains strange and a company wants to build a delivery drone. That's not too remarkable by itself. However, how the company wants to power the flight of the drone is wild and seems to be almost out of science fiction. They will not use props or jet engines. They will not use internal combustion at all. They will use an ion drive to do so. Yup, really. The drone they want to build doesn't even look like much of a drone. it looks like a stacked flying pallet: The name of the supposed technology that makes this possible? Air Tantrum.

Neither inspires a lot of confidence[2].

However, there is at least some basis in reality for these UFO-like combustionless engines. The Ion Drive tech was demoed at MIT (see video below)[3] and even brought up at ATS[4].

Since then, Berkeley flew a micro drone the size of a coin[5]. This last one seems the most promising to be, tbh.

The drive functions by ionizing the air and pushing it away via electrostatic forces. It's not entirely a new idea. OTOH, it seems to be tinkered with more recently. The question is whether or not the energy in the pallet-like 'drones' would have enough thrust to lift a decent sized payload. Even if true, then it will depend on if the electrical storage will be light enough and long lasting enough to make a payload carrying flight possible. The final bit is if the propulsion system will be cheaper and more efficient than a mere prop. If not, it will have an uphill battle to be adopted, if it's viable at all.

However, the company claims the drones will be far, far quieter than a traditional prop driven drone. That'd be fine by me. I just want them to make sure to put 1950s scifi music on a speaker as it takes off and lands.

Time will tell if this is real, or just more woo.

A flying bug zapper? There are lots of bugs in Florida.

Isnt that what the Dyson fans use?

No. Dyson fans use induced air frow powered by a regular fan in the base of the Dyson fan. They just hide the moving parts.

Thing is, this is small now, but it will get scaled up. Just like that computer that used to occupy an entire room now fits in your hand.

How do you scale up something that has to weigh almost nothing to work? The weight of the supporting structure will be too heavy for the ionized air flow to lift.

Sound's like a scam to attract venture capital from the naive. Using current day technology "Lifters" struggle to lift their own weight and are usually powered externally because they can't lift their own power supplies, let alone cargo. And there's no indication that the technology could be made powerful enough in the future to be more than a novelty.

With the cost of delivery drones probably being quite a lot, I can imagine there being a great game about to start between the delivery company drones and spare part collectors keen to get their hands on some nice free tech and a few packages thrown in for free.

Time to build a bazooka-net and a disguise. lol

Shoot an arrow just over it trailing around 50 feet of fishing line. The drone will suck in the line and it will take off or jam the propellers.

posted on Dec, 3 2020 @ 05:02 PM
link
How much ionized air would have to be generated to get significant lift? If it is all the same polarity, it should be self repelling and we should be able to smell ozone when a package is delivered. Without standardization of polarity, what would happen if a Posidrone and a Negadrone crossed paths? Imagine exhaust from one entering the ionizer of the other. Loss of propulsion? Electric trauma?

originally posted by: Blackfinger
Yeah power to weight ratio is still too far off.

That's what I thought too, but even so I must say if their demo video isn't faked, it's the first time I've ever seen an ionic lifter lift its own power supply. That seem impressive to me that they were able to do that.

Having been favorably impressed by that feat which I didn't expect to see, the demo video was still very disappointing.
While it did lift its own power supply, it seemed like just barely, and the flight was very unstable, wobbly, and very short, only lasting some seconds.

So it looked to be very, very far away from being able to be used to deliver packages commercially. It will need to be able to lift not only itself, but also the weight of a package and that demo unit doesn't look like it could get off the ground with a package. It will also need longer flight time (meaning bigger, heavier battery, so even more weight). I'm not too optimistic.

Another issue is the 40 thousand volt difference between positive and negative electrodes. You can't leave those exposed where someone might accidentally touch them, so whatever the engineers use to try to shield people from that 40,000 volts would add even more weight. It seems pretty exposed in the demo video but I didn't see any people in that.

originally posted by: pteridine
How much ionized air would have to be generated to get significant lift? If it is all the same polarity, it should be self repelling and we should be able to smell ozone when a package is delivered. Without standardization of polarity, what would happen if a Posidrone and a Negadrone crossed paths? Imagine exhaust from one entering the ionizer of the other. Loss of propulsion? Electric trauma?

Air is primarily Nitrogen, so the majority of the propulsion will result from ion wind generated from positively charged Nitrogen ions (cations) flowing from the positive to the negative electrode(s) (plus some other cations made of air molecules).

I'm not sure how you would reverse the polarity. They already have one electrode at +20kV and the other electrode at -20kV. If the electrodes were symmetrical, then reversing that potential would just reverse the direction of ion flow, which would make the ionic wind flow up instead of down. Ionic wind flowing down is generating lift, Ionic wind flowing up would make it crash into the ground. I'm not familiar with the electrode design on this Florida company's unit but usually the positive and negative electrodes of ion wind devices are not symmetricly shaped, one has a sharp edge and the other a smooth edge. In this case I think it's inefficient to try to create ion wind with reverse polarity. See this circuit diagram of a typical ion wind device: 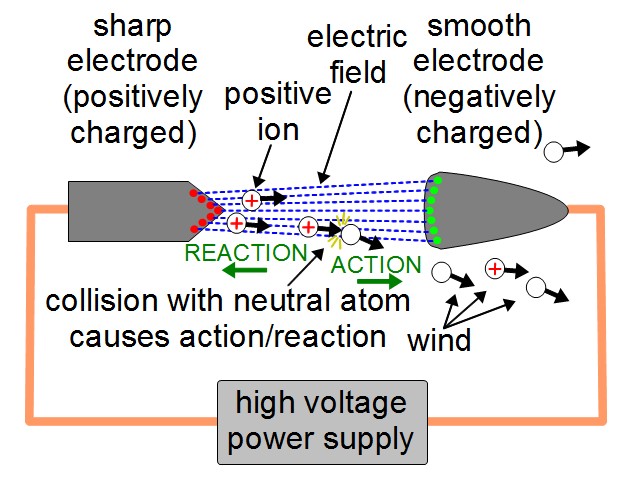 If you reverse the polarity on that power supply, then the right electrode will be positively charged, and it will attempt to generate positive ions, but I think it would be very inefficient at doing so. I also think the sharp left electrode would not function efficiently because it would tend to attract all the ions toward the sharp point, which is exactly what you don't want when you're trying to generate ion wind, it needs to be spread out a bit. I think the reason the left side gets the positive charge is that the sharp edge is more efficient at generating the positive ions, and the smooth edge is what you want to spread out the ion wind a bit. So the design illustrated wouldn't work well with reverse polarity, those electrode shapes are associated with that polarity for specific reasons.

By the way, are you the same guy I remember who thought the e-cat wasn't a hoax? Have you figured that out yet, or am I thinking of someone else?

edit on 2020124 by Arbitrageur because: clarification

I don't know how it works. I operated the unit and it generates excess heat. It isn't a few percent; it is multiples of input energy. There is some detectible radiation that dissipates about 10-20 minutes after the unit is shut down but it is easily shielded during operation. The radiation may be the result of a side reaction.