Well, some general once told a politician that "the military forces are not a scalpell but a broadsword", and that is enough to know that you cannot use military force untrained in opposing protestors to calm people down.

Soldiers know their weapons, and not many of those can work without bloodshed.

If their commanding officers do comply with stupid, outright illegal orders from higher up, they are compliciting in those orders.

In the Bundeswehr, you have the explicit right even as a simple private to disobey illegal orders. I might look up the exact wording of that right, but I think you get the gist: "Do not comply if the order seems fishy!"

posted on Jun, 3 2020 @ 08:02 AM
link
In terms of Patriotic Protesters helping out.....well put it this way...if you fart in a silent church full of people....you are not anonymous...people around you know it was you they just don't point YOU out.....but....if everyone just PLANTS THEIR FEET AND REFUSES TO GIVE YOU COVER TO RUN AND HIDE AMONGST THE MOVEMENTS....AND THEY silently point you out....its like a beautiful geometric pattern growing AND MOVING ITS alive.......and no matter where you move to it will follow you fluidly as long as everyone just WORKS TOGETHER AND keeps THEIR FEET PLANTED an keeps silently pointing at you....NO BULLETS JUST BAYONETS AND FINGERS.

We've gone beyond protest at this point.

If they break the line of cops, then they are inciting a fight. That's not protest anymore. We're into the territory of insurrection.

There is the line in the COTUS about ensuring domestic tranquility, and when homes, lives, and livelihoods are at risk to sheer anarchy, that comes into play. That's where we are now.

I've said before that this sort of thing can become rebellion, revolution, but the key is how much of the rest of the nation agrees with and sympathizes with you. The problem here is that while everyone agrees that the officers who arrested George Floyd need to be brought to justice, we also see the system at work. Everyone from the president on down sees this. The cops are in jail. There are charges brought, etc.

No one sympathizes with that, and attempts to overthrow the system off the backs of that, to build a revolution out of that will fail. So we're left with insurrection, not the glorious revolution.

It would certainly help if the protesters would turn in the agitators and criminal elements.


Back then the protest were well funded and every bit as violent if not more so than those going on today .


Not just no , but hell to the no.
From one who LIVED that history

originally posted by: Arnie123
a reply to: ADVISOR

Pass me the chili mac and any ranger bars 😋

Only if I'm getting that jalapeno cheese!

posted on Jun, 3 2020 @ 08:31 AM
link
Guys I dont like this. I feel like the stupid left is going to make the right elect an ACTUAL Hitler, not a fake one like they portray trump.

Those morons have gone on for so long now they're going to get themselves killed and no one is going to care........ and when that happens this country is truly lost. Left or right, doesn't matter what side your on, get your head out of your ass and get it together. We can accomplish legally many things at this junction of time. But these riots are asking for trouble from our government and foreign operating at the riots.

One or two machine guns mounted to humvees would be all that is needed.

Honest patriots know that if weapons are issued, there is always live ammunition issued to at least a portion of the unit. Weapons don’t even get transported to the range without somebody having live ammo on them, much less sent into a hot zone.

For a Canuck that likes to pontificate on all things American law and military, you seem to have a pretty poor understanding of both.

posted on Jun, 3 2020 @ 08:54 AM
link
It's too bad all this crap didn't happen in the Winter. I bet most of these people wouldn't stand around outside in freezing temps. Though I have to admit I would enjoy watching them freeze if they tried.

posted on Jun, 3 2020 @ 11:57 AM
link
Well you kill someone with a bayonet, they get a stabby wound, no proof. Get killed by a bullet and you've got forensic evidence to find a shooter.
Why aren't the protesters trying to burn down the Pentagon or Fort Knox?

When I was in we didn't do that training anymore. It's pretty simple tho. Step stab.

originally posted by: ManFromEurope
I do not know anymore if these are officers or army forces... 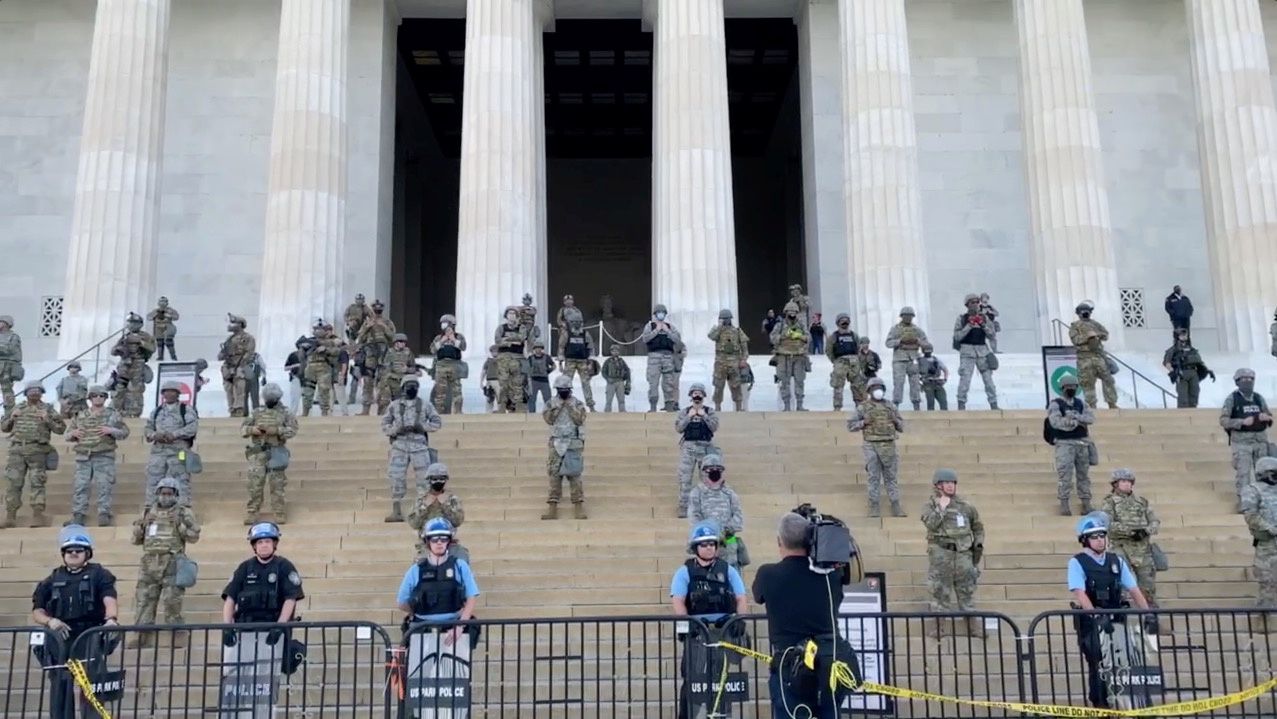 About 12 hours ago, Lincoln Memorial.


Damn, must be some pretty underfunded Army Guard units around, or bad leadership! Those hideous grey ACU’s end of service date was October of last year. Only the New OCP’s are allowed for wear.
Last time I saw my bayonet was locked up at the armory, I wasn’t even allowed to clean it.

originally posted by: Shamrock6
a reply to: one4all

Honest patriots know that if weapons are issued, there is always live ammunition issued to at least a portion of the unit. Weapons don’t even get transported to the range without somebody having live ammo on them, much less sent into a hot zone.

For a Canuck that likes to pontificate on all things American law and military, you seem to have a pretty poor understanding of both.

I do believe that a Civilian Sniper Overwatch is what would fit the bill.Of course you would need some peripheral supports.

That's all fine...but here methinks Civilian Peripheral Overwatch is needed.If any use of terminal force is required Authorised Legally supported Civilian Agencies designed to take such actions will be most usefull.The Boots on the Ground can flush em out....then the Authorised Civvies can pop their Balloons if anyone fires guns... if need be.

To be sure...I understand its time for change...new approaches...why waste resources minesweeping…..just build a new road.
edit on 4-6-2020 by one4all because: (no reason given)

Why allow the crowd to get worked up enough to test the line at all?

In this case especially, the show of extra force is to deter them even getting started.

Where the pack of agitators might feel good about being able to overrun the cops, they might have second thoughts about several lines to troops standing behind them.

originally posted by: Shamrock6
a reply to: one4all


I know I know...the whole co=-operation thing just isn't something we all expect to see...after all the "Movies" and Satanic baby eating freaks in Hollywood have brainwashed us to think that Federal and Civic Authorities are NOT supposed to work well together....right?....just like in the fake demonic faux-reality they used to call Hollywood Entertainment....it was really Hollywood entrainment of our minds.

A Crime re-enacted for entertainment is another crime if it is not a part of a legitimate News feed and right now we do not yet have legitimate News we only have fake news..You heard it here first.

We have all been living in a Nightmare....you use the word Fantasy as if it were a misnomer….do you forget about the deep rotten hole we are now digging ourselves out of? Maybe its time to stop thinking of positive changes we all wish for as FANTASY and time to begin making it reality .

originally posted by: ketsuko
a reply to: one4all

Why allow the crowd to get worked up enough to test the line at all?

In this case especially, the show of extra force is to deter them even getting started.

Where the pack of agitators might feel good about being able to overrun the cops, they might have second thoughts about several lines to troops standing behind them.


Because everyone is working WITH THE CROWD...to SUPPORT the protestors not to stop them....the idea here is to nail the arses of the Domestic Terrorists trying to incite Civil Unrest in a criminal organised non-constitutional manner.

There never was a "pack of agitators" there has always been an organised driving force behind the Domestic Terrorist actions we are seeing poison our Protests.....its not the Protests we need to stop its the Terrorists trying to hijack the intentions and voices of our good men and women who are trying to ask for changes and the good men and women in and out of Uniform trying to support an protect that right to protest......they ARE BEING HEARD...steps ARE BEING TAKEN AS FAST AS POSSIBLE.