posted on May, 14 2020 @ 03:33 AM
link
I assume most people have seen the story of how a small planet collided with earth and during the collision a chunk large enough to form our moon was born. Much of that theory was based on the moon rocks brought back to earth during the 70s which had carbon they assumed came from the long ago collision. New study says maybe that is not exactly what happened ?

That theory reached fruition in recent years as it became accepted that the moon was formed from material that was expelled when a large planet collided with the Earth. Part of the theory hinges on data from the moon rocks that indicate volatile carbon vaporizing from the moon due to the heat from the massive impact. But now, it appears that there is ancient carbon embedded in the moon's surface, suggesting some changes may have to be made to the theory of the moon's birth.

The work involved studying a year and a half of data from the KAGUYA lunar orbiter, focusing specifically on carbon emissions. They found that the moon was emitting more carbon than has been thought, and more than could be accounted for by new carbon additions, such as the solar wind or collisions with micrometeoroids. They also found that some parts of the moon have been emitting more carbon than others—the basaltic plains, for example, emit more carbon than the highlands. The researchers suggest this is because surface material on the plains is newer than material in the highlands and thus has had less time to vaporize.

Should we start a crowd funder so we can send Greta Thunberg up there and sort it all out?

originally posted by: Tulpa
a reply to: 727Sky
"How DARE moon! "

Science cannot explain the moon mysteries.
There is only one way to explain them. www.evawaseerst.be/spaceshipmoon.htm
Not the right place to post this, so better don't read it.

posted on May, 14 2020 @ 12:33 PM
link
LOL yea zandra aliens did it .
Lord the mass and gravity of the moon match It is NOT hollow just because of the impact making it ring . even solid iron will ring when hit with a hammer .
having said that It is my Theory that the Moon was captured BY earths gravity . The evidence being the MOONS materials DO NOT match earths !!!!
The moon has MUCH much less heavy atoms Like iron and much much more light atoms like the ones that make up Aluminium .

Now any geologist can tell you what place on earth a rock came from by how that rock was formed in taht area such as granite . And the Moon rocks DO not match any are on earth zip nada .
one last thing earth has NO h 3 But the moon does why ?


They don't , the theory is that debris from the proposed collision of the two planets formed the Moon in Earth's orbit by the same processes as how the Earth formed in the orbit of the Sun.
edit on 14-5-2020 by gortex because: (no reason given)

Are you serious? Have you ever wondered why it only happens if the rock is over a certain size or mass? This rock Eros didn't form a ball: 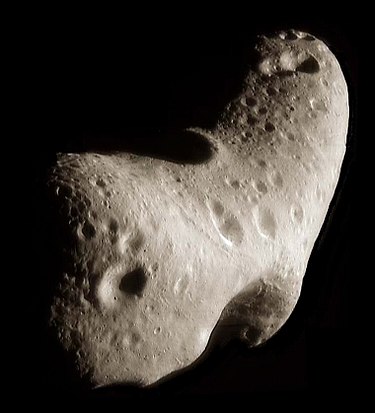 If gravity really existed, then the Earth would end up in a ball like the other planets and this solar system diagram showing the flat earth wouldn't make any sense! originally posted by: gortex
a reply to: 727Sky
Never been a fan of the Theia theory so any evidence calling it into question is good to see on a personal level.

The Theia impact hypothesis is our best guess but it has some issues. I don't know how serious the issues are, but this carbon issue doesn't strike me as unsolvable.

I made a thread about an alternate theory for moon formation. The scientist proposing it says we would need to go to the moon to test the idea looking for specific traces he spells out. He admits his idea could be proven false, but he said the most important thing is that people need to realize the impact theory has problems so even if his alternate idea doesn't pan out, other people should come up with other alternate ideas that solve the problems. This is the old thread:

Did the Moon Form from a Nuclear Explosion?

We need to get inside the Moon.

Why? Old lava tubes may make a better lunar habitat than surface dwellings since they are shielded from micrometeorites and radiation but I'm not sure what they would do once they get in there. The HE3 is on the surface so if we ever figure out a way to use that, it would be mined from the surface.

originally posted by: LSU2018
They don't , the theory is that debris from the proposed collision of the two planets formed the Moon in Earth's orbit by the same processes as how the Earth formed in the orbit of the Sun.

I mostly agree with your answer, except for the "They don't" part. No matter how the moon was formed, they do! (If the mass is as much as the moon. The only times we see rocks not forming a ball is if they are below a certain mass, and gravity versus mechanical strength of rock pretty much explains why).

originally posted by: Tulpa
a reply to: 727Sky

Should we start a crowd funder so we can send Greta Thunberg up there and sort it all out?

That would be epic.

We need to get inside to meet the man in the moon.

posted on May, 18 2020 @ 05:14 PM
link
I remember watching some documentary about Ancient African Tribe's their decendants said that they were told stories about how Moon had appeared one night.

I heard a story about a giant and a big blue ox carving out the Grand Canyon.

originally posted by: pheonix358
I would laugh my ass off if the moon turns out to be the colony ship that bought our ancestors here.

That would be epic.

We need to get inside to meet the man in the moon.

I can't remember where I read or heard this, but it was relayed that Satan was in competition with God and attempted to replicate Gods creations. It was mentioned that Satan tried to create a planet but could only create a feeble replica. The moon certainly does fit that description.

Also, you can not date the moon via surface rocks. It can not be determined where those rocks came from, seeing how the moon is constantly receiving dust, derbies from space, and other planets. You would need to recover rocks from deep in the crust. A guess would be at least 2000 feet. Do you think the man in the moon would allow such a operation?

originally posted by: zandra
a reply to: 727Sky

Science cannot explain the moon mysteries.
There is only one way to explain them. www.evawaseerst.be/spaceshipmoon.htm
Not the right place to post this, so better don't read it.


I suspect many would throw it in the Hoax bin.
I have bookmarked it for a read later on.

originally posted by: fromtheskydown
I suspect many would throw it in the Hoax bin.
I have bookmarked it for a read later on.

It certainly has a lot of nonsense, but there is a bit of a stab at the science part, worth discussing.


One of the stumbling blocks? The ratios of oxygen isotopes of Earth- and moonstones are identical, while it’s clear now that an impact would have mixed everything in a disproportionate manner...
-Earth never had a magma ocean, however a necessity for the impact model;
-iron oxide content of the moon (13%) is exactly between that of mars (18%) and Earth (8%), while it should have a bias toward Earth’s content of iron;

This is a bit muddled. If the Earth had a magma surface when the impact occurred, simulations show we would see what we see, regarding the isotopes and iron content.

Of course there's no citation for the claim that "Earth never had a magma ocean" which is probably not true. None of us were there to see it but when you have a lot of impactors on a forming planet, it can heat things up, so a molten surface seems quite possible during planetary formation, for a limited time window.

This animation from Discovery shows the stage of planetary formation where the proto-Earth was pelted with impactors, releasing enough energy to create a molten surface, when the other proto-planet Theia impacted:

Formation of the Earth and Moon


Here's a paper about how the Earth's surface could have been molten at one time, supportive of that animation and contrary to the claim at the "spaceship Moon" link:

Impact-induced melting during accretion of the Earth

Here's an article about some impact simulations on a magma surface which solves the isotope issue and would explain the iron contents:


In these simulations, instead of hitting a solid planet, Theia hits an Earth covered in a global magma ocean...

“It’s not impossible that there should be a magma ocean, but the timing is critical if this was the mechanism for the moon’s formation,” says Jay Melosh at Purdue University in Indiana. If this hypothesis turns out to be true, it could help us figure out exactly when the moon formed.

The simulations also matched two other important properties of the Earth-moon system: the moon’s relatively high speed as it orbits the planet, and the fact that the moon has more iron oxide than Earth – iron oxide would have been more abundant in liquid rock than solid.

In any case I think the Giant impact idea is a hypothesis. It did have some issues and perhaps still does, and these relatively recent articles show research is ongoing to try to figure out what really happened.

As Carl Sagan said, it's good to keep an open mind, but not so open your brain falls out. The author of that link doesn't seem very open-minded to the possibility Earth once had a magma surface, but it wouldn't surprise me at all if it did, so I don't know why the author would deny the possibility. Maybe because he's biased with some things he wants to be true so he re-writes reality to support his bias?