WHO Director-General Tedros Adhanom Ghebreyesus has slammed nations that have decided to impose travel bans to protect their citizens from the coronavirus, claiming such measures are not necessary.

Most recently, Ghebreyesus has sought to portray the global spread of the coronavirus as one that is inevitable with or without travel bans by calling it a “test of political solidarity” to “fight a common enemy that does not respect borders…”

Elected Democrats in Washington, D.C. have joined the globalist chorus to keep America’s borders open amid the coronavirus outbreak, suggesting that travel bans may lead to discrimination against Asian Americans:

Ah, the typical Democratic response to everything. "It is racist."

They have accused Trump of racism for not allowing entry to anyone from the area of China where the virus was rampant.

Now it looks like globalists and many Democrats once again are demanding totally and completely open borders. Why, because US citizens are so stupid, they will shun their next door neighbor Asian because they will think they are carriers of the virus. Really? Exactly how horrifically stupid or horrifically evil do they think the majority of US citizens are? This clearly says to the US citizens, you are so stupid, you will think the people who run your favorite Chinese restaurant you have eaten at for years are carriers of the coronavirus and will shun them or treat them badly because they are Chinese.

I applaud travel bans from countries who are struggling to control the virus in their own country. It would be natural for people from those areas to want to flee to a country without the virus. However, with the very long time from exposure to symptoms, that would mean carriers who don't know they have the virus flying to countries without the virus and creating a pandemic very quickly. How is that racist? I don't give a rat's behind the race of a person who lives in an area that has many victims, and I sympathize with their desire to flee, that is natural. But to blame their race? Which one? Chinese because it began in China? How about Italian, white people, because Italy is now struggling with it also. This is not something that should be used to flame the fans of racism.

By simply pointing out and crying "racism" like the boy who cried wolf, the globalists and Democrats are showing their true colors. They use racism as a weapon and love to fan the flames to make it worse, for political gain.

Also, do they really think that to make us all equal and to have fairness:
every country and every race should be equally exposed to the virus
by open borders, and free and open travel during a pandemic.
Do they really think the fair and just thing to do,
if we weren't a bunch of nationalist racists,
like Trump and the conservatives/Republicans,
would be to welcome with open arms and no masks
people fleeing from highly infected areas?

www.businessinsider.com...
Exactly why 60% of Americans don't trust congress to contain coronavirus outbreak
They spend time crying "racism", Trump is a racist, open borders, let everyone in or you are a racist.
Let people travel freely at a time when a pandemic is brewing - which is the exact way to make a pandemic worse.

IAMTAT
+12 more
posted on Feb, 27 2020 @ 09:00 AM
link
Leftists called Trump racist for stopping flights from China early in this epidemic.
Are they still claiming it was a racist decision?

Let Pelosi, Schumer, Bernie, Biden, Warren, Buttigieg, Klobachar and Bloomberg openly call for resumed flights from China to avoid racism.
Not going to happen.
edit on 27-2-2020 by IAMTAT because: (no reason given)

How do you think Trump's precious stock markets would react of the USA suddenly stopped all travel to and from countries reporting viral infections?

According to Trump, there are only 16 cases in the USA, soon to be zero! But, the USA is not testing for the virus, except in rare cases. We really don't have any idea how widespread the virus is here, because the symptoms present as typical cold and flu symptom, sore throat, fever and cough. And, most people recover without major intervention.

Vroomfondel
+18 more
posted on Feb, 27 2020 @ 09:04 AM
link
I am entirely in favor of keeping our borders open and welcoming people from countries with massive infections raging. But only on one condition: line all these democrat a$$holes up at the airport and make them be the official greeters and taxi drivers.

shooterbrody
+27 more
posted on Feb, 27 2020 @ 09:06 AM
link
a reply to: Sookiechacha
Trumps stock market?
Really?
Wow
Now you hate on the stock market?
You are ignorant and should do some research.
Testing is ongoing and an actual plan has been in place since 2018.
But lie away.
150 million gun deaths right?
BAMN continues.

posted on Feb, 27 2020 @ 09:07 AM
link
a reply to: The2Billies
It's just the usual Globalist/Democrat idiocy. Ask them any question and they will give you the exact opposite to the correct answer. It's as if they have no common sense whatsoever. Who in their right mind would think it's a good idea to open the borders when there is a potential global pandemic? The common sense approach to stop the spread of the virus would be to isolate it into as small of an area as possible as to contain it.

posted on Feb, 27 2020 @ 09:10 AM
link
I have no trouble with the idea of restricting travel to and from countries with out of control situations.

It may be time to consider adding South Korea, Italy, and Japan to the list. At the same time, watching the numbers in China, there may be a point in the coming weeks where flights there can start to pick up on a limited basis again.

Restricting travel isn't racism when you talk about disease. It's common sense.

He should stick to something more at his knowledge/competence level, like the drive-through window: "Fries with that ?"

Inside the country? It's not a big deal at the moment, but that could change very, very quickly.

Restricting travel from countries with lots of disease helps maintain the status quo of "not a big deal" internally. If we can keep our rate of infection at a trickle, we'll be much better off than if it becomes a flood like they're seeing in Italy or Iran or China ...


Were you against Trump stopping flights from China when Leftists were calling him racist for doing so?

If so...please explain why?


"President Donald Trump is reportedly furious that stocks are plunging..."


"Reportedly" being the keyword here, from the MSM that comes up with lies some low IQs swallow...

closing the borders? That train has left the station looooong ago!

The Impeached Idiot should reinstate the CDC Quick Response Team. Instead, you got this:


‘We’re very close to a vaccine’

—Trump, also in remarks in India

Trump’s remark about being “very close” to a vaccine, made while discussing the outbreak at a press conference, was initially interpreted as a reference to a coronavirus vaccine. The White House later told reporters the president was referring to an Ebola vaccine being near completion, though the FDA already approved a vaccine to protect against Ebola in December.

There are several groups racing to develop a coronavirus vaccine, but there is still a long road ahead. The CDC has estimated that a vaccine is unlikely to be ready in the next 12 to 18 months.

The National Institutes of Health is working with the biotech company Moderna to develop a vaccine against the virus. In a press conference Tuesday, Anthony Fauci, director of the National Institute of Allergy and Infectious Diseases, said that work is going on schedule.

“A vaccine may not solve the problems of the next couple of months,” he acknowledged.


The virus might go ‘away in April, with the heat’

—Trump, speaking at a governor’s meeting earlier this month

The arrival of spring — and warmer weather — in the Northern Hemisphere typically means the transmission of cold and flu viruses will dramatically slow down. Though the novel virus isn’t related to flu viruses, it is similar to a new flu virus in some ways. When a new flu virus emerges, it can circulate outside of flu season, simply because so many people are susceptible to the new infection.

It’s not clear whether this is also the case with the new coronavirus. But it’s possible the virus will keep spreading beyond flu season. Most people across the globe are likely vulnerable to infection. There isn’t widespread immunity against the virus. It’s also spreading in Singapore, where the temperatures are equivalent to those seen in summertime in the U.S.

That suggests higher temperatures might slow transmission of the virus, but probably won’t stop it, according to infectious diseases epidemiologist Marc Lipsitch of Harvard. “I think the fact that Singapore is seeing cases transmit is also kind of evidence that it’s not a matter of yes or no,” Lipsitch told STAT earlier this month. “It’s a matter of degree.”

No worries (a lot of worries, actually!):
This is your acting deputy secretary of homeland security asking the internet where to get information about the spread of #Covid19! 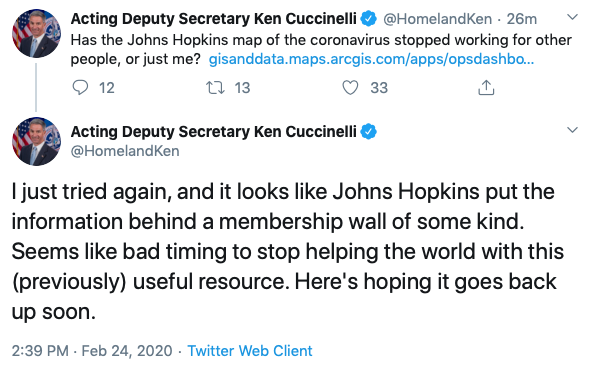 originally posted by: XCrycek
But Trump said no need to worry, so why closing borders at all?
Dumb, dumber, Trumpster

I see you're not great at reading posts upthread? I understand ... literacy isn't everyone's greatest skill.

I'm thinking "Missionary work" to Milan, or sabbatical to South Korea. Something catchy like that.