posted on Feb, 9 2020 @ 10:27 AM
link
Wouldn't life on Europa have similarities to the life at the bottom of our sea floor where sunlight does not reach them and it's very dark?

originally posted by: game over man
Wouldn't life on Europa have similarities to the life at the bottom of our sea floor where sunlight does not reach them and it's very dark?

Probably. The difference of course would be that our deep sea life likely originated in a less harsh environment near the surface and they gradually adapted to the deep. Where would that have happened on Europa?

Beat me to it.

Octopus tastes disgusting.....let them stay there.

posted on Feb, 9 2020 @ 03:32 PM
link
If they haven't found life already, when they do and get samples, it will somehow end up in a bio-weapons facility in China where it mutates and escapes containment.

My reasoning is life needs means (room) to evolve. Planets like Europa are bound to lock inner life beings inside. Too much time has passed since it became of what is it right now. If Europa was once harboring life -- it's now all but fossils.

originally posted by: MaxTamesSiva
a reply to: OrionHunterX
Have you watched this movie?
Professor Monica Grady is about 7 years late in her prediction.

First thing I thought of when I read the OP! LOL!

Nope, not going to Europa. I prefer to deal with Martian microbes versus being eaten by blinky-lighted bad tempered Octopi.

Well there are theories life on Earth may have started during a snowball Earth phase. Link

Will Europa have currents? Europa is tidally locked, this link says it does.

Call me when we find something.

originally posted by: BerkshireEntity
I agree that the likelihood of some form of life on icy moons like Europa is pretty high especially under that ice sheet.

It would be pretty cool if there were some sort of octopus like species there but I'd it were discovered, as one poster stated, we wouldn't know about it for a while. They might announce they found life but I'm sure they won't say exactly what kind of life they found.

Also, the idea of caves and deep caverns on Mars maybe having life in them is very plausible. The caves can definitely shield a good amount of radiation and ice and water could be prevalent. Take a look at some of our largest caves on earth. Most of the biggest ones have not been fully explored and many have their own ecosystems that have life found in no other environment on earth. And, just like caves on earth, there could be large amounts of fossils to be discovered.

Mars and Europa are just 2 examples. Imagine a lot of the other moons around the gas giant planets. I thought I remember reading about a moon around Neptune or Uranus that was unique and of interest to scientists. Anyone know or remember this?
S & F for this post OP thanks!

Do check out this link....www.science.org.au...

And here's a monolith on Mars! Whodunnit? Natural? Well of course, unless there's proof to the contrary!! 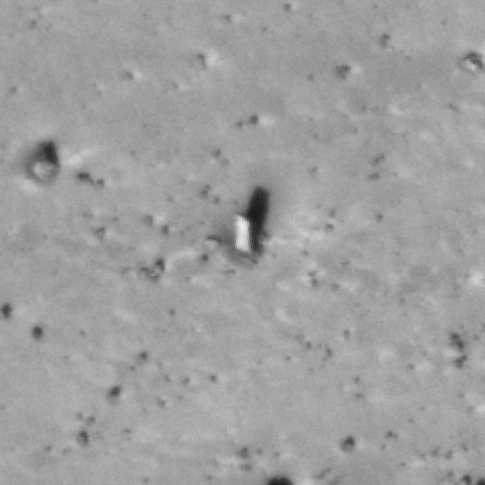 Let me guess , he has Read Arthur C. Clarke Novels ?

Came here to say this as well.

Life on Europa was one of the main premises of the novel 2010.

ALL THESE WORLDS ARE YOURS. EXCEPT EUROPA. ATTEMPT NO LANDINGS THERE.

As far back as the mid-80s certain groups related to Scientology/EST (and heavily involved in McDonnel Douglas/Lockheed) were talking about manned missions to Europa and permanent human bases attached to the underside of the more stable ice continents. In fact, the first "Artemis Project" (97) was based on a consortium of private interests that wanted to put humans on Europa by 2002. They were all huge fans of Arthur C. Clarke's 2010 Odyssey Two. The movie "Europa Report" was decades late to that particular party.

posted on Feb, 10 2020 @ 07:25 AM
link
Terrific theme, probably the greatest life sciences revolution of our generation –
Here’s a book foreword I wrote addressing the theme a few years ago
www.jamesoberg.com...

posted on Feb, 10 2020 @ 12:28 PM
link
a reply to: 0zzymand0s
Thank you for pointing that out, I'm not familiar with the Artemis Project. What were the predictions of these huge Arthur C. Clarke fans decades ago that was so spot on about the OP's topic (Professor Monica Grady's prediction of higher forms of life on Europa, like that of an octopus)?

Europa Report may be decades late but details matter. What if the aliens (Non-Terrestrial Intelligence) in The Abyss were from Europa, the manta ray with squid-like humanoid features in the 1989 James Cameron film? Wouldn't it be interesting to know where they were from?

Should we cast the net further?

I'm still holding out...that Europa has some types of jellyfish species swimming about.
edit on 10-2-2020 by Erno86 because: typo

Being an optimist, I'll wait.

posted on Feb, 10 2020 @ 08:43 PM
link
a reply to: JimOberg
Hi Jim, can you please help me answer a few questions that I've been looking into on and off on-line for sometime now?

Why did NASA took decades to officially admit that there is water on the Moon and Mars? I definitely understand that it takes a long time to confirm such findings but why decades if we consider the following?

1978 - then USSR published a laboratory analysis of the samples taken by Luna 24 probe that they contained 0.1% water by mass.

There were about a hundred missions to the moon dating as far back as 1958, the unsuccessful Pioneer 0 capped by an equally unsuccessful Beresheet lunar mission from Israel last year, 2019. About 60% of the missions from half a dozen countries were considered successful, not counting those that were considered partially successful.

Why did it took 38 years for NASA to officially confirm that there is water on the moon? I guess you know where I'm going, that's just water not fossils of single-celled organisms or heaven forbid live ones? How about Mars where we actually landed probes to take a closer look?

Do you think it will also take at least a decade for NASA to confirm life in other parts of the solar system?

Please feel free to point out the errors in my short outline, any input from you will be greatly appreciated.