It all gets shady once the planes where in the hanger. Some of the passengers may of been on the plan and got a new identity. Others where casualties of war.


No. Why is the burden of proof put on me to resolve this?


Your accusations, your fantasy, then you validate it.

The source you cited claiming cell call for Hanson was an airphone call in another source I cited.

If the calls where made from an airphone then a credit card bill can quickly resolve that fact.

I think you claimed you dug deep into this stuff.

So? You claimed Hanson’s call was a cell with no validation. I think you got burnt by your cited source.

You cannot list the “impossible calls” for anyone to validate.

I would think if you dug deep into this, you could cite the phone records that are on line.

If you dug deep into to this, you could state how many airphones were on flight 175. And cite a source.

I would suspect because remote-controlled planes don't have passengers

Then why are families missing family members that boarded flight 175 and flight 11. Aircraft tracked to the twin towers by radar. The passengers’, crews’, and hijackers’remains and DNA were recovered from the WTC debris.

I should have know your fantasies were that delusional.
edit on 16-9-2019 by neutronflux because: Added and fixed


You first. Prove me wrong.


You first. Prove me wrong.

You brought it up, you prove it

on every other posts, you tell others to show proof, dates and times, records, etc… your turn

originally posted by: Blue_Jay33
I slow clock is still correct twice a day every day, ...

Sorry, but that's just not correct.

Loved the Icke vids, thanks.

Personally am not sure about him, but he sure is much more 'polished', than he was in his beginnings.
Probably a good bit of truth, mixed in with some sensational sauce.
Maybe the whole reptilian thing was misdirection, half-truths, or misinterpretation ?

Not in the early days of this technology. It first started with one line that was problematic. Things have improved heaps since then.

If there where multiple phone lines that where working then prove it, where is the evidence? Where is the call data?

Airfone was an air-ground radiotelephone service developed by MCI founder John D. Goeken, and operated under the names Airfone, GTE Airfone, and Verizon Airfone. Airfone allowed passengers to make telephone calls (later including data modem service) in-flight. Airfone handsets were often located in the middle airliner seatbacks, with two handsets per row for 6-wide coach seating configurations, and more or less depending on the aircraft layout and fare class. First class cabins typically had one handset per seat. Some planes had one or more bulkhead mounted phone stations with cordless handsets that the passengers could use, instead of the multiple wired handsets. Airfone phone calls were usually quite expensive compared to ground-based telephone calls, costing $3.99 per call and $4.99 per minute in 2006.

Bell Mobility used the Airfone technology on Air Canada flights, but branded its service as Skytel (no relation to the Verizon-owned paging firm of the same name).

Calls were often discounted or free for customers of airplane-based catalogs like Sky Mall, and Verizon Wireless subscribers could pay $10 per month and 10 cents a call or a flat 69 cents per call with no monthly fee. Airfone could be used for very slow modem calls, and attempts at data service were made in 2003 and 2004 using an on-board email proxy server.

Many of the in-flight calls made by victims of the September 11, 2001 attacks were made over Airfone and Air One.[2]

Phone Calls from the 9/11 Airliners

Third, the FBI evidently intended the same with regard to the other two flights. The two people who had been reported as having made cell phone calls on United 175 – Peter Hanson and Brian Sweeney – were said in the FBI’s Moussaoui trial report to have used onboard phones. And the call from AA 11 flight attendant Amy Sweeney to fellow employee Michael Woodward, which according to Woodward as quoted in the FBI affidavit had been made with a “cellular telephone,” was said in the FBI’s Moussaoui trial report to have been made using an onboard phone.40 In light of the fact that we have statements from the FBI about Flights 77 and 93 showing that, unless a call is explicitly designated to have been a cell phone call, it was made from an onboard phone, we can safely assume that the FBI intended the same for Flights 11 and 175.

It seems, therefore, that according to the FBI’s report for the Moussaoui trial, the only cell phone calls from the 9/11 airliners were the aforementioned calls from Edward Felt and CeeCee Lyles.

Can you prove for 2001, flight 175 did not have enough onboard phones?

No. Looking into it I am probably wrong on this one. The reports at the time was on cell phones being used. There is some question about the phones being decommissioned, flight 77 stands out here. The claims about collect calls being made on these phones do not add up.

I have made a few incorrect conclusions along the way. The only way to get over a mistake is to acknowledge it.

posted on Sep, 16 2019 @ 06:49 PM
link
Good video,
I read my first book by David prolly around 2006ish my significant other worked at Borders and after reading thru the history, religion, moved onto meta -physical/speculation. When I first read about the shape shifting reptiles from the 4th dimension I started laughing. I continued thru the book "Enter The Matrix" ignoring that aspect or just placing it off to the side. I read other books of his (they are basically 2/3rd's the same as the 1st as for some reason he has to rehash it all.)

One day I was bored and decided to explore the shape shifting reptiles theory and look for examples in other works I have read and saw evidence. Re-watched they live, interesting how in the bible written eons ago has the devil portrayed as a snake,watched some Jesse Ventura specials on the subject etc....

David does make some interesting link in the bloodlines that were cross referenced by multiple sources so if he was right about that why must he be wrong about the shape shifting cannibal reptiles from the 4th dimension. With the crackdown on those who commit acts against chdrn and higher ups only points more to the accuracy of his claims.

One day I looked at myself grimacing in the mirror noticed how reptilian my head looked in it. Perhaps we are all shape shifting reptiles from the 4th dimension and the difference between us and those in charge is we have forgotten how to shape shift (or had the knowledge stolen from us.)

Can you prove for 2001, flight 175 did not have enough onboard phones?

No. Looking into it I am probably wrong on this one. The reports at the time was on cell phones being used. There is some question about the phones being decommissioned, flight 77 stands out here. The claims about collect calls being made on these phones do not add up.

I have made a few incorrect conclusions along the way. The only way to get over a mistake is to acknowledge it.

Do you have the service contracts and maintenance logs to back up the claims.


There is some question about the phones being decommissioned, flight 77 stands out here.


That rumour came from this document presented by Rob Basamo of pilots for 911 truth.

If you check the dates at the top and the bottom, you will see that they changed 2007 to 2001 on the bottom date. The 1 is not like the others on the page.

An outright lie by Rob that is still believed and circulated by truthers to this very day. 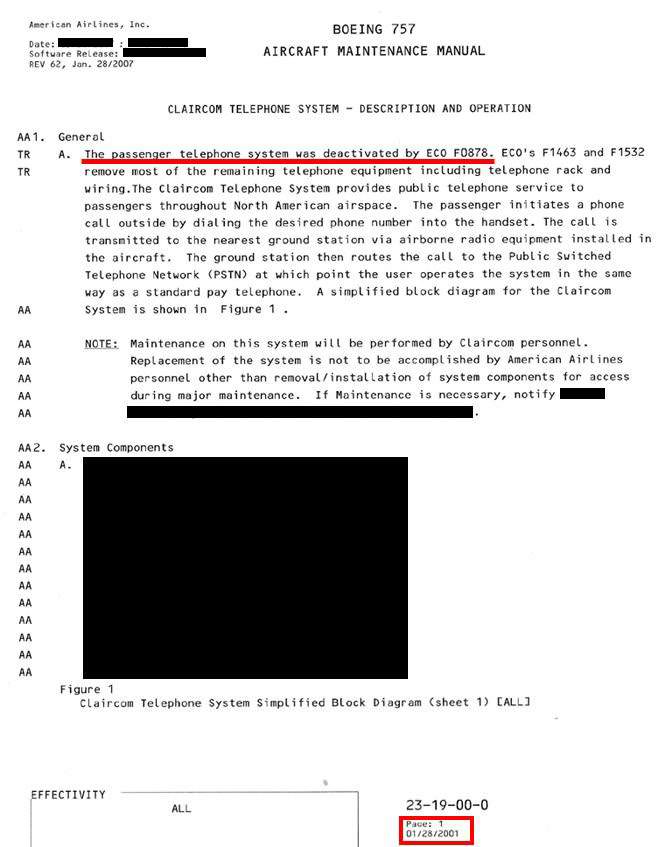 The phones were still working on 9/11. So, there would be enough serial numbers in that wreckage to be able to tie it back to the plane that was Flight 175.
Was that done?, and if so, how could the scenario of radio controlled look-alike planes be entertained? Also, the DNA from 3 of Flight 175 victims were recovered from ground zero...

Do you have the service contracts and maintenance logs to back up the claims.

No. Closest i could find was a FOIA request from Pilots for 9/11 truth

Actually, looking at the topic title, American Airlines should have the maintenance logs for N644AA, Boeing #24602. "Conveniently" for the OGCT, a private corporation would be exempt from FOIA as I understand things. Serial number references: www.airliners.net...
registry.faa.gov...

That rumour came from this document presented by Rob Basamo of pilots for 911 truth.

Well done in finding that, I tried looking for it. One question with the document you recovered, How could a maintenance log exist for 2007 when the plane was decommissioned in 2001? Something there does not make any sense.

It does look like a strawman attack. This is where a fake story or document is used to discredit a whole case. Just because this document does appear to be tampered with due to an inconsistent date does not mean the whole disagreement with this issue is finalized. This document may be getting close to the truth, finding an unaltered copy of the original will help solve it.

There have been many of these traps put throughout the community to cloud and discredit the truth. The justice system does have big problems with these issues as people try to avoid punishment and face their mistakes. You do need to be like Sherlock Holmes in piecing it all together.

posted on Sep, 16 2019 @ 09:14 PM
link
15 Saudi nationals got Visas to travel to America and managed to carry out 9/11 successfully, that's a red flag for me. Their names were on a terror watchlist pre 9/11. How is it, the CIA station in Jeddah Saudi Arabia never noticed these men were terrorists?

29 pages of 9/11 commission report do show the CIA monitored the 9/11 hijackers activities. How else would they know the 9/11 hijackers met Saudi spies, Saudi Embassy officials, at restaurants and hotels across America. CIA was up to know good, the fact 9/11 took place unhindered suggests they allowed it to happen or worse played a part helping it succeed. Hijackers just happened to pick a day when the US airforce was doing drills across the country, just a coincidence?

Al Qaeda existed- Yet was clearly formed and set up to be the new boogymen on the block. Bin Laden was likely an intelligence asset for the Saudis and Pakistan ISI in the 90s.


One question with the document you recovered, How could a maintenance log exist for 2007 when the plane was decommissioned in 2001? Something there does not make any sense.


This is not a maintenance log for N644AA. Its the general order to deactivate and remove seat back air phones from all AA aircraft.