Assume there comes a point when, if exports stall, that UK supply so exceeds demand that the oil companies run out of storage and refineries need to be mothballed. 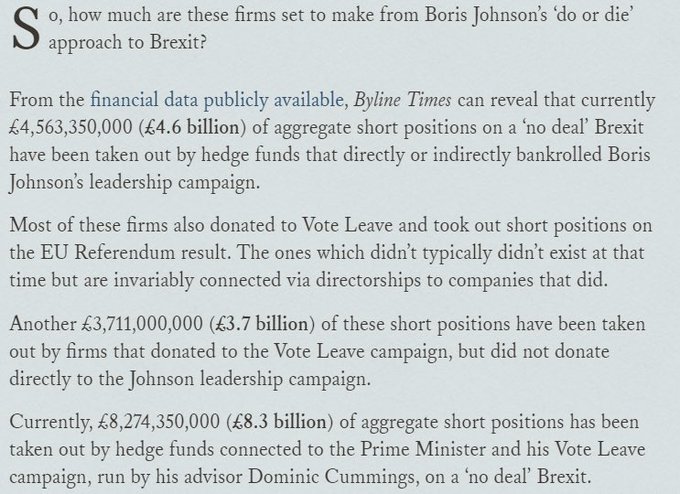 The Tories have been going after the NHS since they gained power, You haven't been paying attention.

All your assumptions are based on the EU being an absolute monster to the UK when we leave.
It's almost as if you know they'll act like the authoritarian asshats they are and deliberately make an example of us when we leave.

If the EU is as altruistic as you remainers make out, we have nothing to worry about. You really are just scared of everything.

If the EU does try to make an example of us the rest of Europe will see what a monster they have created. The EU will end anyway, especially if member states feel like they're being held to ransom. Leave is a win win.

Added to your NHS part. No. Just no.
Not ONE party in the UK would go for the NHS as they know that they would never, ever be voted in again. Also, we've already been promised that the NHS is completely off the table.

Socialised medicine will work only for so long regardless, the signs of collapse are already all over the NHS, a better system needs to be implemented anyways.


Where in the assumptions is the EU being an absolute monster?

The whole document is a worst case scenario.

Where in the assumptions is a likely scenario? The fact is Britain will be fine.

You don't have to assume to know the EU is a monster, they've proved it time and time again. Globalism is never, ever a good idea.

The NHS is still the NHS. How exactly have the Tories 'gone after it'?

The NHS, with today's health tourists and immigration WILL collapse at some point without absolutely enormous financial contributions.


Socialised medicine will work only for so long regardless, the signs of collapse are already all over the NHS, a better system needs to be implemented anyways.


Yeah, It's been deliberately underfunded to make it appear to be failing, Cue privatization. The oldest trick in the book.


Last time I checked the EU have never attempted to have terrorists blow up a primary school in Belleek Northern Ireland. I know who the monster is. But that's for another thread.


The NHS, with today's health tourists and immigration


Once again, A myth you regurgitate from the Dail Mail and right-wing brexiteers. If anyone is clogging up the NHS it's us unfit overweight chainsmoking Kebab eating Brits. Health tourists? wtf.

originally posted by: Argen
That's worst case? Not to bad looking from my point of view.


As the EU doesnt want us to leave ...... I wonder just what they are afraid of?

If its sticky for us it will be the same for them ?

I'm a 70's child, I lived in England. There were bananas, oranges, pineapples and petrol. The fear tactics concerning Brexit are imho, laughable. YMMV.

ETA And medicine, we had medicine too!
edit on 11/9/19 by LightSpeedDriver because: ETA

The whole document is a worst case scenario.

Where in the assumptions is a likely scenario? The fact is Britain will be fine.

You don't have to assume to know the EU is a monster, they've proved it time and time again. Globalism is never, ever a good idea.


You said the assumptions are based on the EU being a monster. Can you actually give an example?

You own political views aren't relevant to the contingency planning.

Think most of us are just going to play operation whatever we run out of will be taken from the skin of a fat Tory back.

If this all goes south the best game to be playing is hunt the rich twats that caused it.

See how long there Ivory Towers can resist the onslaught and demands of 66 million people.

originally posted by: Soloprotocol
a reply to: OtherSideOfTheCoin
If they had this on the side of a bus the result would have been overwhelming to remain.


All governments like to be economic with any truth however, when you see Boris' smiling face of reassurance as in pictures in front of the battlebus..it suddenly becomes a smirk in the face of this document....not only that, he admitted to a channel four reporter while seated on that bus, it was a lie. Boris is aclassic upper-class twit, that being as defined years ago by Monty Python. I would say too that even this document doesn't give the real picture.
I know for a fact that Kent, and especially around the likes of Ashford to Dover has been a log jam for years, where lorries have been parking up for years on hard shoulders, so much so that recently...and only recently, land has been given over to accommodate these trucks, and all that was a matter of course as being a part of the EU...but with such crappy infrastructure, compared to the continent. This will be but a small problem to the GB, compared to everything else that will hit us very hard, while I do note that they mention that all those with low incomes will be dis-proportionally affected in what must be seen as a negative way...reading between the lines that's not a sympathetic remark, since the higher orders have always seen the very lower orders as a criminal grouping...who will bite when affected.

So, I do think BREXIT will be bad, that the law and order muscle will be/is to be tuned to dealing with the lower orders, while fat cats will go on doing what they have always done to protect their wealth, often in a criminal way, but there you go.

A pity I think, for a country that for a while prided itself on equality for all, but that has gone, and there is nowt I can do about it anyway.

As to OP this is what as a leave voter I dont wont, how the hell after 3 years since we voted can we not have progressed beyond 'no deal' scenario, even teenage boys get to 1st base, we have not even picked a bat yet, why havent the current idiots been in the EU constantly with their proposals, we voted for 'out', and as the nation is not dumb we voted for 'out' on terms WE agree to, not which are dumped on us from a great height.

Combined with winter, which is also is predicted to be quite bad this year.

I predict a lot of dead pensioners, dead homeless and sick people if it all goes breasts up.

originally posted by: OtherSideOfTheCoin
Yeah so this is what the government has been covering up because they don't want the public to know just how bad a no-deal will be.

Interesting that they chose to refuse to release the communications despite parliament voting to compel them to do this.

Honestly this is just #ing awful, how anyone can support this government is beyond me.

I hope that members not from the UK read this and realise this is what people have been getting so pissed about.

Actually the worst case scenario being presented here is way way better than the fear mongering of remainers prior to the referendum and since.

Looks like a bit of a dud to me.. not what remainers were hoping for. But I am sure the spin will be epic.

originally posted by: The GUT
a reply to: OtherSideOfTheCoin

It's prudent identification of a worst case scenario and shows the Govt. is serious about ensuring we are ready.
That's all the Yellowhammer document is, but it's been dressed up as the certain outcomes that we need to panic about.
Remainer Project Fear 2.0 as they desperately try to kill our democracy.