In regards to no ability to store nuclear waste... I'm not gonna say that's untrue because I am not a nuclear scientist of any sort, but I do remember a few years ago it "went public" briefly (then I never heard anything else about it) that nuclear waste can be safely sequestered in ceramic plates. Which are then buried. Supposedly once the nuclear waste is added to the slurry used to create ceramic it can be held and handled by hand.

Again, not saying this is definitive or anything, but for just a bit this was touted as the solution to nuclear waste.


Now, possibly, but not at the time or it would not be an issue even now (see the utter fiasco that is San Onofre). They created the systems with zero plan to deal with it. It was NOT a concern to those pushing the issue.

I'll say this, Earth is a being (collective) expression with zero differentiation between you and I, burying toxic leftover weapons waste is blood boiling bad.

Imagine your neighbor burying their left over party trash in your liver - exactly the same.

I agree with everything you say here.

I'm just trying to think of what we are going to have to do to fix this place once we actually do get this all figured out. I know burying nuclear waste is bad, but at the same time we tend to think that there have been "natural" nuclear meltdowns in the past. Don't ask me how that happens but I believe it was in Africa somewhere where they have found "naturally occuring" nuclear waste in the ground already. At least by sequestering it somehow before burying it it wouldn't be straight up poisonous nuclear waste leeching out of the ground.

What in sam hell is going on here? Quite the cast of characters. They will never put Humpty Dumpty back together.

Look who's on the Congressional Advisory Board. 🙄

The usual liddle suspects.
and taking big bucks from China to Peddle their mind control spyware in the states and globally

Wow a lot of those names stand out. Will def have to take a closer look at that website.

One other thing that stands out to me in this organization and Maya R Cummings charity along with most other charities/foundations is a common theme they share evolving around children but more specifically, childhood obesity and healthy school lunch programs. Which brings another organization to mind --- The Edible Schoolyard. Another healthy eating non profit geared toward children. Many celebs are involved along with James Alefantis (Comet Ping Pong)

originally posted by: Trillium
#BREAKING 20-year-old man with rifle,handgun & body armor arrested at Walmart on Republic.
SFD Police say he had 100+ rounds of ammunition. Off-duty firefighter with concealed carry gun held him at gunpoint until officers arrived about 3 minutes later:

What is it about Walmart?

Oh that's right...Peter Strzok, the Trump-hating Hillary-loving corrupt FBI agent said he had to go to a Walmart and could just smell the Trump supporters there, Hillary's basket of deplorables.

That's it! The Hunt for Deplorables at Walmart is on!....I guess. Why wait for the movie when the Real Life event is happening now! ~~sigh

You're getting a little too close to the truth errbody.

Thanks for that 'ping' test; ear test passed. 🤣

That was unique. Mathemagical music.

originally posted by: EchoesInTime
Breaking now...Sue Gordon is leaving her position after a meeting with Trump in the Oval Office.

Since she's out, Trump should be naming the new DNI shortly. There's only a week left till new one takes over.

Schiff’s golden girl. Now both of his Intel Puppets are gone.

United Nations Secretary-General Ban Ki-moon has appointed former United States President William J. Clinton to the position of United Nations Special Envoy for Haiti. The appointment builds on Mr. Clinton’s extensive engagement with Haiti, both while serving in the White House and most recently through his Call to Action on Haiti at the Clinton Global Initiative in September 2008. Mr. Clinton also accompanied the Secretary-General to Haiti in March, during the Secretary-General’s visit to raise global awareness of the Caribbean nation’s needs.

As Special Envoy, Mr. Clinton will help jump-start social and economic recovery efforts in Haiti. He will focus attention on the importance of new partnerships and efforts among the private sector, civil society and donors, as well as strengthen local capacity and create a more stable and prosperous future for Haiti. Building on President Clinton’s lifetime in public service, the Clinton Global Initiative (CGI) reflects his belief that governments need collaboration from the private sector, non-governmental organizations, and other global leaders to effectively confront the world’s most pressing problems


Was the Humpty Dumpty Institute involved in Haiti? (stupid name btw)
edit on 8-8-2019 by cherokeetroy because: (no reason given)

I dont know if you are aware or not, but back in Feb someone on 8ch dropped a huge deep dive dig on the author of the book you are now reading. Perhaps after you finish your book you might like to give this a read just to see the other side of the coin thats been dug up on her. Im not judging or anything, just letting you know someone has come up with a lot of interesting facts that they prove over and over in the dig. Coincidentally, the day this dropped is the day she closed both her Twitter and FB accounts. I found that to be a little curious in itself.

You really do have to read it all to be fair and then decide for yourself.
You can find and download the Full PDF on MEGA HERE

As Q has mentioned on occasion, Be Careful Who You Follow...


I was aware and did read it.

I tend to disbelieve the smear

But that's just my opinion

When I see Fiona speak something rings true in my gut.

Here is her response to what was published.

I understand her frustration in leaving social media. It's been said she was threatened as well.

In her position if what she says is true she sure has been through enough.

Her book has a lot about the ancient history of the cult as well as details about many cases around the world with references.

If nothing else it's worth comparing.

Earlier we spoke of the "fish gods". Well, I've been reading this page here www.bibliotecapleyades.net... for awhile now. Initially I was reading this stuff in relation to something completely different, but by "coincidence" I had gotten to the point where this guy/gal is talking about Enki and the fish gods on the very same day that the topic came up in this thread (funny how that happens). Anyways, this is very fascinating stuff, IMO, and the author here is making the case that the fish gods stuff derives from a certain cloak that was passed down from initiate to initiate back in the day. Apparently it came to Jesus by way of the Druids. Or so the story goes. And the druids apparently wore this thing and somehow used it to birth SOULS from their body. The soul came out of the body through the mouth and floated. They were then turned into amulets that people wore around their neck (have no idea why). The author is arguing that Mary Magdalene wore two of these things to Jesus' crucifixion. I'm guessing to help him reincarnate?

The author then makes a case that Jesus, Moses, Solomon, Joseph of Arimathea, and others were also known as various pharoahs in Egypt. With Jesus being none other than Tutankhamen.

If this is true it explains why in Revelations it was stated that Jesus was crucified in Sodom AND in Egypt. Anyways, I figured some may be interested in reading this. This may be the source of the "fish god" stuff, or at least a piece of that particular puzzle.

posted on Aug, 8 2019 @ 08:19 PM
link
Let's not forget who left the DOJ for her Dream Job heading up Walmart and where many shootings occurred.


Rachel Lee Brand (born May 1, 1973) is an American lawyer, academic, and former government official. She served as the United States Associate Attorney General from May 22, 2017, until February 20, 2018, when she resigned to take a job as head of global corporate governance at Walmart.


She also served as Assistant Attorney General for the Office of Legal Policy in the George W. Bush administration and was appointed by President Barack Obama to serve on the Privacy and Civil Liberties Oversight Board. Prior to becoming Associate Attorney General, Brand was an associate professor at Antonin Scalia Law School.


In 2008, John McCain, then a candidate for the Republican Party's presidential nomination, named Brand to his Justice Advisory Committee, which would have recommended judicial nominees to McCain were he elected.

- Not a single Democrat voted to confirm her as associate attorney general.

- She has Dutch ancestry.

- She worked as an intern for Sen. Chuck Grassley, chairman of the Senate Judiciary Committee.

- She could have become the person with power over the special counsel’s investigation. 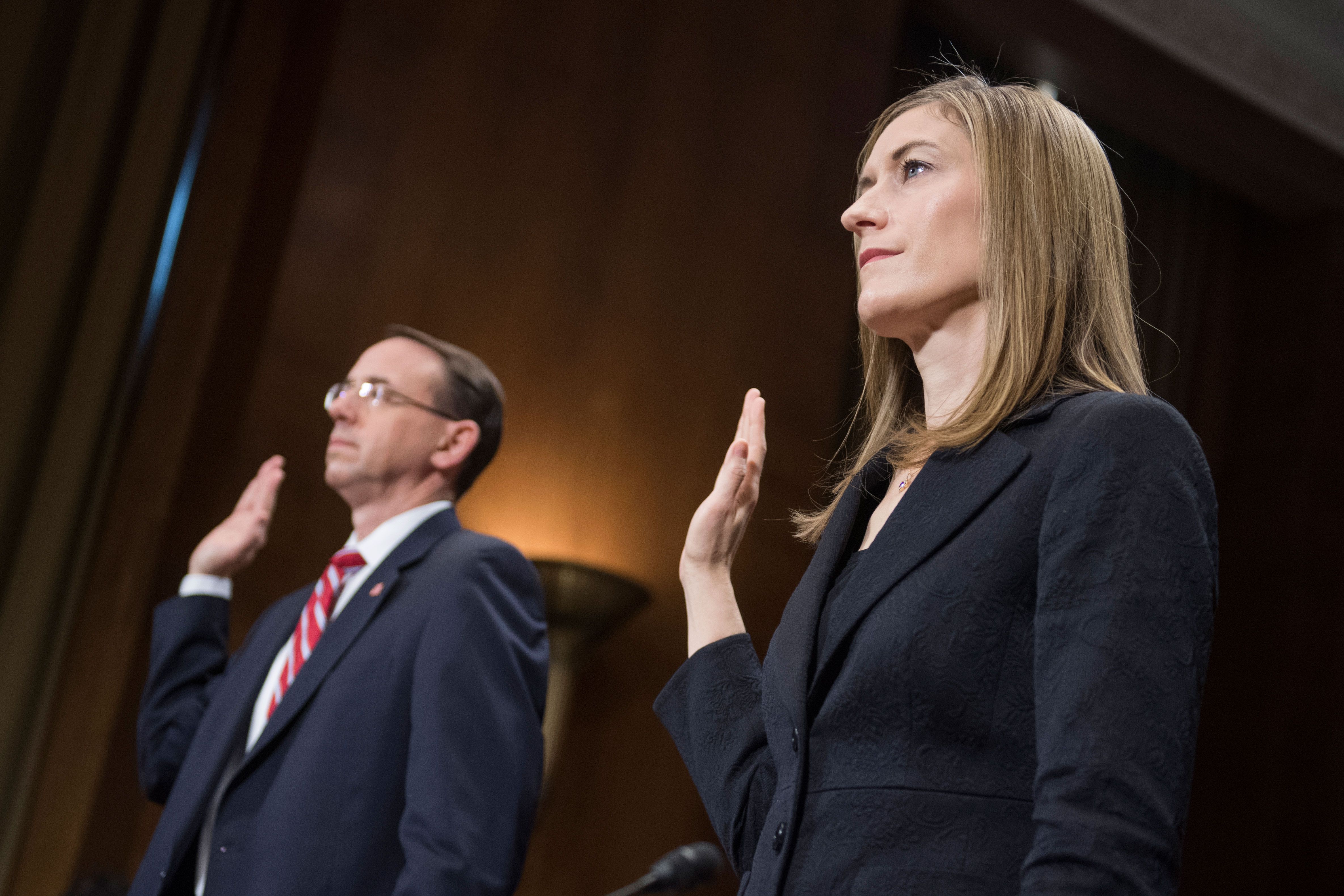 Rod Rosenstein and Rachel Brand are sworn in during their Senate Judiciary Committee confirmation hearing.

On February 9, 2018, the New York Times reported that Brand, along with her assistant Currie Gunn, had resigned from the Justice Department. The New York Times indicated that Brand oversaw "a wide swath of the Justice Department" and helped lead the department's effort to extend Section 702 of the FISA Amendments Act that "authorizes the National Security Agency’s warrantless surveillance program."


On February 12, 2018, NBC News reported that Brand had quit the Justice Department over fear she might be asked to oversee the Russia probe and had taken a position with Walmart as EVP of Global Governance and Corporate Secretary. As executive vice president of global governance, chief legal officer, and corporate secretary, Brand is in charge of the legal department, global ethics, compliance, and investigations.


In a 2008 publication of the Heritage Foundation, Brand argued against, and proposed various solutions to, what she termed the "over-federalization" of criminal law in the United States.


No doubt she's been busy with Walmart shootings.


Rachel L. Brand, by her own admission, has never prosecuted so much as a traffic case. But in January 2006, when Justice Department officials began to discuss removing some United States attorneys, Ms. Brand was proposed as the top federal prosecutor in the Western District of Michigan.

Who Is Rachel Brand?


As the National Law Journal explains, “She fought Obama’s recess appointments to the National Labor Relations Board and the U.S. Securities and Exchange Commission’s rule requiring companies to disclose their use of minerals from war-torn regions.”