By the way, you know my ideology and you see me debating it every time I post in one of these threads. I'm hoping that one day it might click with some people.

I do love how easily the topic is turned toward me every time I show up though. It speaks volumes honestly. YOU are the one who refuses to debate my ideology, that's why you and others turn the topic towards me, personally, every time. There never seems to be any actual debating around here anymore, only circle jerking and derision toward anyone that does not join in.

But I will take my "beating" from the majority of the members on here and will keep saying what I'm saying. Maybe someone is reading and will consider my words as having merit. If not, oh well.

It's so funny, Trump is supposedly this genius who plays 4D chess with people yet those who believe in that never even consider that they are the ones being played, not only by Trump but by the media and other politicians as well. It's theater, bread and circus.

A TRILLION dollars in tax cuts. A TRILLION. A reward to themselves because they are the ones who control the legislation. Isn't it crazy how easily that fact is glossed over? The ultra-rich are the ones lobbying to create legislation in their own favor! LEGISLATION that just rewarded the very same group of ultra-rich people (who undermine our political process through lobbying) with a TRILLION dollars in permanent tax cuts.

How more clear cut could it be? The same thing continues to happen while we argue with each other over soundbites by politicians who are bought and paid for to divide us.


Honest question and not being nasty or anything :

Why do you ALWAYS play the victim when someone tries to debate or disagrees with you?

I and probably many many others have seen this so many times.

Thanks for your response.

Look at the replies to my posts. If I'm being called names and being accused of things that aren't true then of course I'm going to be defensive, especially when it's always, ALWAYS te same gang of members.

Why do Trump supporters act like victims all the time? That's the better question. The victim complex is strong with his base, all because the media has purposely put them on the defensive 99% of the time with their intentionally divisive coverage.

Your average every day person is not the one causing the division we see today, it is the media and politicians that are doing the dividing and people are all too happy to jump on board the hate train. It is the way in which the media chooses to report on things, they've got it down to a science.

Do you know what propaganda is? The media sells it and the members on here 100% buy it for the most part. All that hate and animosity is what they were going for when they started "attacking" Trump constantly. The media has effectively made Trump's base completely blind to the globalist moves he has made, they have created a very spiteful demographic that will justify literally anything this administration does no matter what because Trump's base see him as a martyr. Thank the media for that, they are marching to their orders like good little lapdogs and they've got many people swept up in their two minutes of hate.

Did you hear about Bush trying to legalize propaganda disguised as news? You're seeing propaganda disguised as news today and its aimed at both sides of the fence not just one as many on here seem to think. If people admitted that the news was propaganda aimed at not only the other side but themselves as well they'd have to consider the effects the news cycle has made on their psychology. It's easier to fool someone than to convince them they've been fooled.

You're an insecure narcissist.

Trump supporters have been called degenerates from the very beginning, from the top and are now being physically attacked by the left. We are victims. Or is it not victimisation to attack children in public eateries for wearing a MAGA hat. Not victimisation to have screaming, violent miscreants follow you from establishment to establishment to ostracise you on twitter? Not victimisation to have some feral idiot follow you around screaming at you, steal your hat then scream racism when she is arrested. "Don't taze me bro"... To have companies deny you service for your political leanings? To fear attending a public rally because you want to hear both sides, but the left only want you to hear theirs, and you simply being at this rally is an indication you are the enemy?

You having your opinion pushed back down, is not victimisation, stop playing the victim.

Perhaps if you open your mind as wide as your eyes you could see things clearer.

Look at the replies to my posts. If I'm being called names and being accused of things that aren't true then of course I'm going to be defensive, especially when it's always, ALWAYS te same gang of members.

Why do Trump supporters act like victims all the time?


Uh, you're the brain surgeon who's first reply in the thread mocked anyone commenting against Pelosi as "triggerables", accused the OP of "earning his check," and then rambled on like a spastic epileptic at a strobe light convention about the "Q thread" participants... but yeah, crawl up there on your little cross and figure out how to nail in your right hand after you've already secured your left, Columbo. We all see it for what it is. 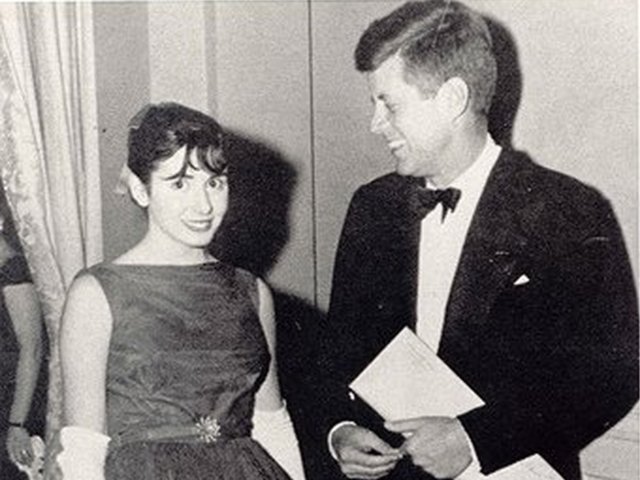 I'll be blunt, they're frankly the only part of her I don't find repulsive. She should wear more low cut tops and a bag over her head when she's on TV...


Wow, even in that picture of a young nancy, you can still see the emptyness when looking into her eyes. Eyes say "nobody home", that smirk says "certified grade A lunatic".

I'm sure she was a hit at parties.

I dunno... I see a young girl, timid in her capacity and intimidated by the great figures surrounding her. Desperate to attain her own power and told she must do whatever it takes in order to gain that power... things left on the cutting room floor, perhaps, and her being too afraid to rock the boat.

too afraid to lose the power that so much was given for, and so selfishly, will do whatever it takes to keep it.

Almost an episode of black books, there...

How can I crawl up on the cross when Trump is already there? The media knows what they're doing and they're very successful at it, I can't help that you guys can't see what's right in front of your face. The media throws out the bait and you guys gobble it up.

I guess I'm just so used to being attacked for my opinions around here that I go into threads expecting it and I post accordingly. I guess I've given up on the nice guy route and just post in the same manner that I usually get replies in. My situation is similar to y'alls in that way, the constant belittling comments and accusations start to wear thin after a while.

Can you understand how the constant attacks could put someone into a sour mood all the time? Of course you can because that's what the media is doing to y'all as we speak, maybe you're just too dumb or blind to see it though? I don't know.

You guys act like you have the media all figured out but you really don't. You are just giving into the hate that they are deliberately fostering. Trump is a deep state puppet just like Obama and Clinton and Pelosi., you guys just don't want to see it because then it would give you the impression that the media was right about Trump. Reverse psychology to keep you guys in line, that's exactly why you justify the corporate tax cuts and selling weapons to terrorists.

originally posted by: 3NL1GHT3N3D1
I guess I'm just so used to being attacked for my opinions around here that I...

Oh boo fricking hoo, there it goes again, the never ending victimhood piss and moan! Look, those who carry themselves as victims, become victims. Those who carry themselves with a bit of pride and posture, don't become bitches. Someone who looks in the mirror and sees "poor, poor pitiful me" every morning, is obviously going to interact with people throughout the day from a position of inferiority and weakness... and it shows.

As if you guys don't play the victim card every chance you get. Half the threads posted on here are Trump supporters crying about something a Democrat or the media said about them or Trump. Trump is the ultimate victim card, the media has made sure of that which is exactly why you guys see him as some kind of noble martyr. Don't fool yourself into thinking that Trump's base isn't rooted in a constant victim complex.
edit on 7/10/2019 by 3NL1GHT3N3D1 because: (no reason given)

How do you feel about that?

You dont get to vote unless you are a legal citizen.

76.9% is no minority toots.
Why do you post such easily proven lies?
Is it a witchcraft thing? Like with the pee?

And, now AOC is complaining that Nancy is overworking Her !! Because you're getting paid, that overrides any sour mood you might have. Plus, you don't actually believe anything you post, so there's that too.


$3 bills with Obama's picture on them 😃

All you need is a driver's license right, some areas give a dl to illegals.
Eta: also I said it was from a leftist opinion piece
edit on 10-7-2019 by Irishhaf because: (no reason given)

I defend Trump, yes. Myself? Not so much. Find an example of me defending myself on here or complaining about someone attacking me, please... I'll happily wait. To defend myself, I'd have to first give a rat's ass about my detractor's opinions or their claims. Simple fact, I don't give a flip who thinks I'm *fill in the blank*. My skin is thicker than that.

originally posted by: Sillyolme
Whites are quickly becoming a minority.

How do you feel about that?

I feel far less concerned about that than I feel about traditional American values (which have been and are shared by Americans of all races) becoming a minority. When we start seeing a plurality of "Americans" championing socialism, a borderless society, and/or the voluntary lessening of American global hegemony, then I feel we're treading on stupid grounds and need to revisit what made America great.