Priebus said his call to serve came after meeting with the wife and children of Senior Chief Petty Officer William “Ryan” Owens, a Navy SEAL who was killed early in the administration in a Special Operations raid in Yemen.
www.foxnews.com... 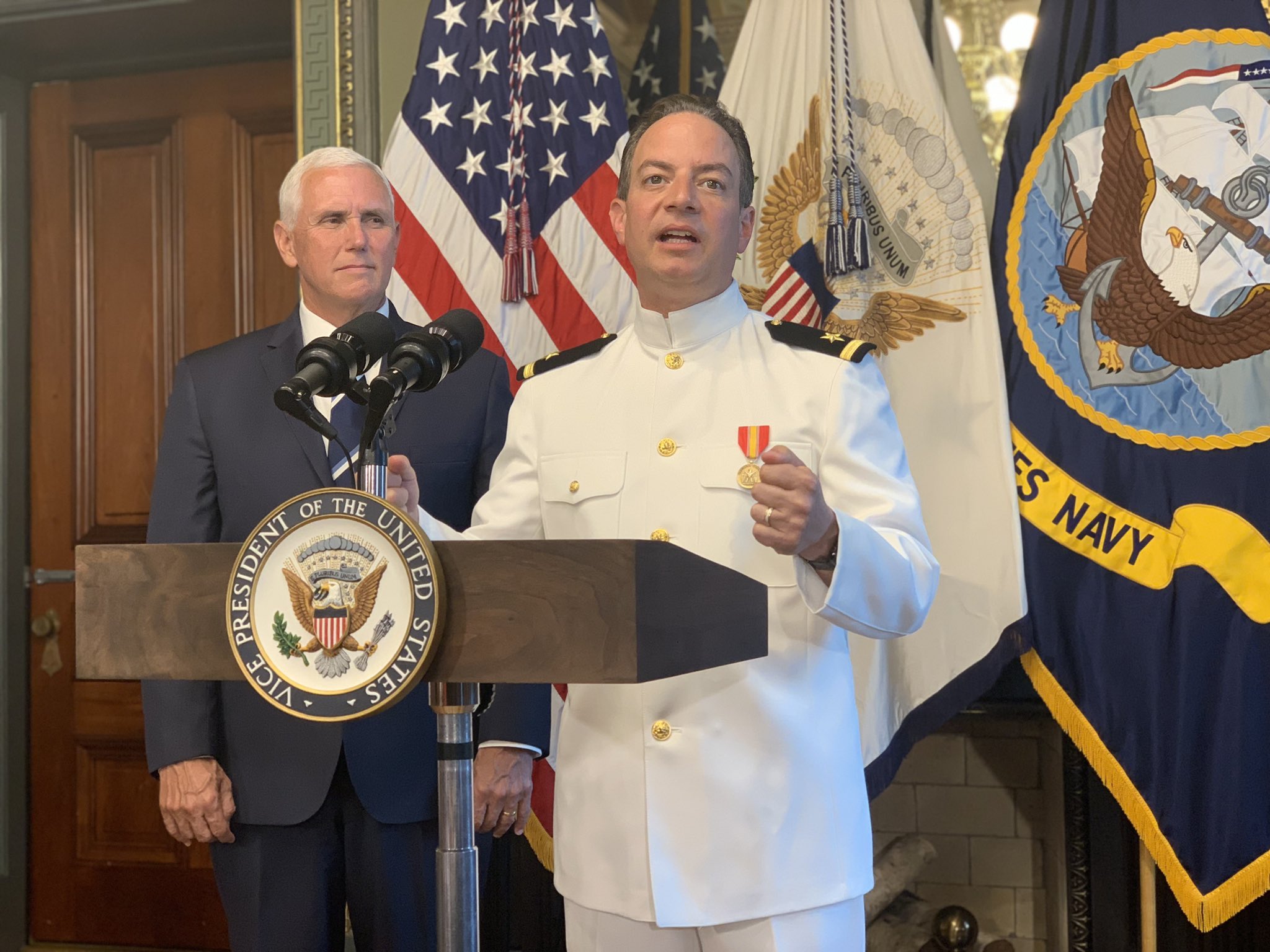 Does anyone else find it amusing that all the Democrat’s “star” witnesses in their sham hearings happen to be convicted criminals???

Their Trump Derangement Syndrome is really kicking in hard.
twitter.com...

Wow... Ensign Priebus earned a medal already! I wonder what his specialty is?

Standing by for continued updates regarding PNW, NE and Midwest regions, will relay once confirmed.
edit on 11-6-2019 by 0311Warrior because: (no reason given)

What makes a good movie. Good Script, Good Actors, Good director and the feeling that while everything seems random, none of it is.

Q suggested over and over again that the House was not only not an issue, it was not important to the overall Plan. Why not? Why not get the house and then just kick some ass was the refrain, followed by "ah hell Q is crazy we lost the house and..." Folks with Q glasses should have seen the House was always meant to go blue by Q.

In a polarized reality such as this, One Polarity - Left, creates the other Polarity - Right. They DO NOT exist independently of each other, but only in relation to each other's existence. Again, Repubs do not exist without Dems, so Dems were created (or repubs first depending on POV) and the natural polarized spawn is the Repubs.

Back to the House. What have the done since January? Well, exactly what Q wanted - fight DJT over nothing of truth or value while revealing Demoncrat Truth. Why do this, why not just get everyone on one side and win? Because in a polarized reality this is IMPOSSIBLE. Folks demand opposition, "two sides to a story", an enemy vs hero, good and bad, the just and the unjust - it is this way with all. So the House is playing the bad guy polarity and nothing more.

The House is playing a polarity part, but the part is not as it seems. DJT has been stopped at nothing by the Dems, NOTHING, yet the teeeveee and media portray the government as in crises because Polarity is required and when things are good - bad must be screamed.

I know how this is going to sound. The Demoncrats are actors, they are not the enemy but controlled bots working overtime to reveal the madness that is the end point of Polarity Game Play. How do I know? DJT has not been stopped on a single thing by them - nothing.

Enjoy The Show - Trust The Plan - The Senate Matters - Dark To Light - Patriots Are Now In Control (in DC).

posted on Jun, 11 2019 @ 06:03 PM
link
Owner of helo that crashed on NYC building was in Epstein's little black book and Panama papers.

Standing by for continued updates regarding PNW, NE and Midwest regions, will relay once confirmed.

What up Warrior so 96Hrs(4days) puts us at Saturday for them to take the easy way out? Suicide weekend coming??? No One Escapes? Fireworks for July 4th?

EMN, it's almost as though POTUS told UK "If you don't make x, y and z public knowledge by this date then we will tell them for you!".

I read the bomb stockpile news report... they built it up by cutting open thousands of ammonium nitrate ice packs for household fridges!


This feels so true!

Today I was reading about uncovered mass surveillance in the UK by M15 and I thought someine is forcing this into the light.

It reads like a push of info they had to disclose! I’m wondering when the first pre-dawn raid will happen and who will they target first?

Someone we’ve not heard of but the investigators find the best canary?

I hope it's Comey

And I really hope they film it.


Tick tock for that hammer . I hope it comes , but I just don't have any faith in our system when it comes to serving Justice for those at the very top .

posted on Jun, 11 2019 @ 08:02 PM
link
Peter Dalglish, an Order of Canada recipient who has been lauded for his charity work, has been convicted of sexually assaulting two boys, ages 11 and 14, in Nepal. (YouTube)

After spending more than a year at an overcrowded jail near Kathmandu, prominent Canadian aid worker Peter Dalglish has been found guilty of sexually assaulting children in Nepal.

Another way to proof that maybe, “They are all here” as in the building / firm and the GREAT first responders get a big THANK YOU for what they did in response....

It seems Durham's reputation has preceded him to England.

Though, I am a bit confused with him talking only to Huber. I thought Huber did not have the FISA info and was only working on Clinton Foundation and Emails.

If that was the deal, I am sure Durham and AG will fill him in.

He earned that medal but it's what we used to call the "Battle of Lackland", it's the National Defense Medal. It's awarded to everyone serving during a time of declared conflict. I've got two of them, one for the Gulf War and one for the War on Terrorism. I missed the one for Vietnam by 18 months.

Yes. I have one as well. Never meant much to me compared to my other medals.

Don't disagree with that to me it was always a "participation" award. I have plenty of others that are sacred that certain times of the year I reflect on.