Okay. Thanks for the clarification. Apparently Huber was overwhelmed with so many Clinton crimes, he couldn't take on any more, so Durham has assumed handling the prosecution recommendations from IG Horowitz. Got it! That's a relief.

Does this mean the transcripts released by Congressman Collins over the past two months were not reviewed by the Director of National Intelligence?

I almost think Mueller could be the mark.

But I don't know, Andrew weissmann was on Mueller's team, several people's lives were ruined...

I'm feelin' more secure than ever...in the idea that while Mueller was, technically, Weissman's "boss"...Weissman was, in reality, Mueller's handler for the DS.

Mueller was merely window dressing, under direct pressure from DS blackmail...AND it was Weissman whom was essentially doing the heavy lifting and running the show behind the scenes on the SC.
edit on 31-5-2019 by IAMTAT because: (no reason given) I found this interesting about Hillary having a desktop computer and having difficulty with login etc yet she is hosting a cyber defense summit? It was mentioned in deposition how Hill was only seen on her blackberry a few times a month. With all the emails she has sent/deleted/bleached that phone never left her hands.

Out of head quarters--

Ok now I am going to predict, for the 1st time there is no if and or but's about it, these people have committed crimes and they will get their day in court. Hallelujah! There is light at the end of this tunnel.

Popcorn is low at my house, the wife out to the grocery and she is getting extra popcorn. The rest of the family are joining in too with stocking up on popcorn.


Well in an exceptional circumstance I have that authority but obviously I intend to consult with them. I'm amused by these people who make a living by disclosing classified information, including the names of intelligence operatives, wringing their hands about whether I'm going to be responsible in protecting intelligence sources and methods. I've been in the business as I've said for over 50 years long before they were born and I know how to handle classified information and I believe strongly in protecting intelligence sources and methods.


Well it's hard to read some of the texts with and not feel that there was gross bias at work and they're appalling. And if the shoe were on the other--

WILLIAM BARR: Those were appalling. And on their face they were very damning and I think if the shoe was on the other foot we could be hearing a lot about it. If those kinds of discussions were held you know when Obama first ran for office, people talking about Obama in those tones and suggesting that

You know some wild accusations like that and you had that kind of discussion back and forth, you don't think we would be hearing a lot more about it?

Where did this ^^^ come from? That is really quite the odd thing to toss out as a comparative...


Well, we do seem to have a Manchurian candidate in Obama after all is said and done. He destroyed the black community in the big cities. Now we need to find a way to reach their minds with the fact that they have been played and focus on the players playing all of us.

Meh, it will happen when it actually happens, until then empty BOOMS, MOABS, HAPPENINGS is all we have.

Not the first time on this ride.


Yet, I sense you too get that this is like a Multi dimensional Chess match being played against us and since most only think normal things, they miss the extraordinary. This is way bigger than DJT/HRC as Rel is saying with his Q analysis. This is like an Onion scheme. We have layers and layers of stink to get thru to get to the core still to go.
edit on 31-5-2019 by Justoneman because: (no reason given)

posted on May, 31 2019 @ 06:31 PM
link
From that woman on Youtube who has made some fantastic connections to NXIVM World Order and the cult ties to Nazis and Mexico. Nancy Salzman's ex studied @ Guadalajara University Medical.

Orozco Mural in Guadalajara, Mexico
This mural was painted by José Clemente Orozco (famous painter) on an interior wall of the Governor's palace in Guadalajara.
Orozco Nazi symbolism 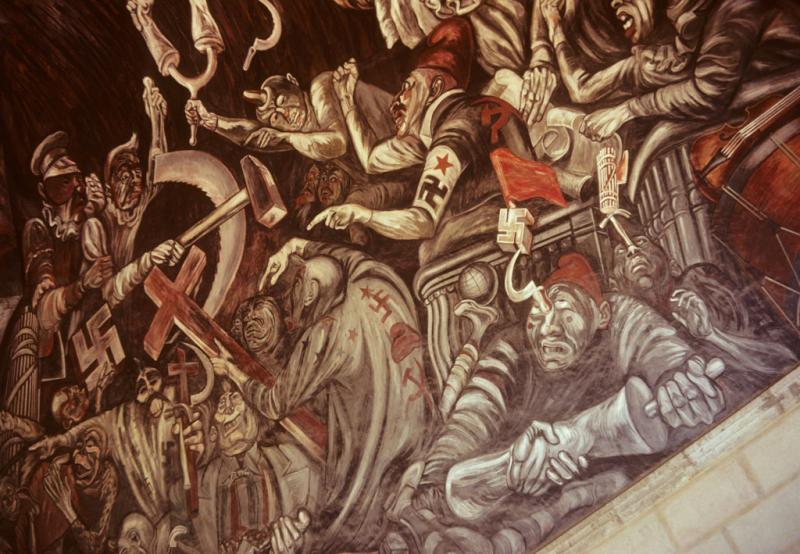 This painting is also done by the same artist, painted at Dartmouth College Library, amongst several other murals at the campus.
Skelton with a baby skelton being pulled out and jars of baby fetuses.
Dark symbolism. Lovely isn't it?

"Gods of the Modern World"

When I heard 'Dartmouth' that sent up some red flags.


What is happening at Dartmouth College’s Department of Psychological and Brain Sciences, and why is the MSM silent? Three professors resigned after investigations into them over alleged sexual misconduct, two are currently under investigation by the college for reasons unknown, and one was fired for plagiarism. Dartmouth is an Ivy League school...


Private school, private foundations, private funding enables them to get away with MKULTRA and other nefarious science activities. This hole is deep.
Elliott S. Fisher


In April 2019 the investigation concluded and he returned to active faculty status to pursue research, education, and service. He was demoted from institute director and no longer holds the John E. Wennberg Distinguished Chair in Health Policy. Additionally, Fisher was physically banned for a period of two years from the 5th floor of the Williamson Building on the DHMC campus, where most of TDI is housed.


Korean-American physician and anthropologist who served as the 12th President of the World Bank from 2012 to 2019. On January 7, 2019, he announced that he would be stepping down, effective February 1, 2019.

I just don't get it. Those images, and in DIA, Pope/Chapel monster, etc. are horrible.

Who is walking into, or spending time in, places like this and not thinking - WTH??? Who willfully spends energy on those places without seeing this is not the beauty of earth - water, mountains, streams, birds etc. How is barbarism... eh... nvm.

BTW, I remember reading ages ago that Dartmouth was the school with all grads getting uber high level high paying jobs - well over Harvard Yale etc stats.

But I don't know, Andrew weissmann was on Mueller's team, several people's lives were ruined...


I'm feelin' more secure than ever...in the idea that while Mueller was, technically, Weissman's "boss"...Weissman was, in reality, Mueller's handler for the DS.

Mueller was merely window dressing, under direct pressure from DS blackmail...AND it was Weissman whom was essentially doing the heavy lifting and running the show behind the scenes on the SC.

That is some deep stuff and I hope in the end we need our tall boots because it is BS. But that is only because it is so rich in treachery that I wish it weren't true for our sake. I suspect flip flops will do it is so real the stink is all on the DS Cabal.

Tell me about it. I interviewed this PhD from Dartmouth about 4 years ago and he had an impressive resume along with a well prepared set of answers But, wow was he ever different from all the other PhD candidates. Myself and few of my team mates felt under qualified to pursue the interview to the next stage. He was more into the phsycology of human behavior than the engineering science needed to excel in this role.
Totally different outlook on how he would work with a very close knit team in the silicon techy world. We just knew he wouldn't work out even though his technical skill set knowledge came across as above others but just wouldn't fit in the engineering 6 figure corporate leadership role. This was back when we were looking for a new engineering manager.


A longtime city employee shot and killed 11 people and injured six others after opening fire late Friday afternoon in the public works building where he worked, police said. The man was then killed by officers after firing at them.

that feeling when you're being blackmailed by both sides.... But again why are we not surprised

5:5
Stage is set BOOM BOOM BOOM. Out go the lights.