Perhaps she had a change of mind.

We recently bought an RV, and if anything hitting the national parks de-schizoids you.

I know you aren't actually talking about RV's but they are fun. We went up the extraterrestrial highway in it. We did not run over Paul with it
edit on 3-8-2019 by zazzafrazz because: (no reason given)

How were the crowds?

Didn't you know Zazz, the truth is free...packing and shipping isn't lol..

posted on Aug, 3 2019 @ 06:49 PM
link
Looks like Tom's claims on Joe Rogan's show that he was publishing Bob Lazar's biography didn't turn out to be true.

Bob (who was never it in for the money and never changed his story) got more coinage it would seem from signing up with Simon & Schyster. 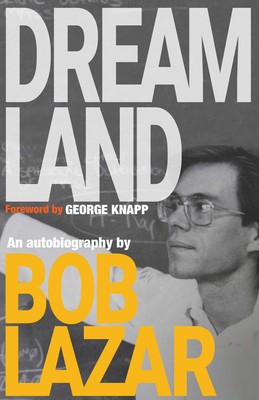 ...Bob Lazar was a brilliant young physicist that found himself employed at a top secret facility in the middle of the desert outside Las Vegas. Under the watchful eye of the government elite, he is tasked with understanding an exotic propulsion system being used by an advanced aerospace vehicle he is told came from outer space. The stressful work and long, odd hours start to wear on Bob and he becomes concerned for his safety......

Why was he so tired? As Michael Schratt points out in his Lazar Report (2015) , Lazar was only there for a total of a single day actual working "hands on".....

Lazar claims that he worked at Area S4 from December of 1988 to April of 1989. He further stated that he was only at the S4 facility a total of 6 times. According to Lazar, his first trip out to Area 51 was spent signing security papers and taking an allergy test. He also stated that the first two days that he was at S4, he did nothing but read “blue briefing folders”. Further, Lazar also states that on at least two occasions that he went to S4, he could only remember getting on the plane at McCarran International Airport, and then getting off the plane to go home. During those two particular cases, he claims he couldn’t remember what took place during the time he was actually at S4. This would mean that Lazar only had memory of actual “hands on” experience working at S4 for a grand total of one day.

The Lazar Report : Fraud, Fiction and Fantasy at S4

The Lazar story looks to be a complete hoax. So maybe TTSA are better off without this one hanging from their neck?

I would actually go out of my way to give a pirated version of this money rather than him.
And then I wouldn't read it.

Pirated money?
What the hell is that?

The used-car salesman of ufology. Probably the ghostwriter too.

It's amazing this liar and hoaxer will probably sell a lot of books.


Gosh, the public are been treated to all sorts of wonders of late. I wonder what will be next in UFO land.


I wont be purchasing it.

I would actually go out of my way to give a pirated version of this money rather than him.
And then I wouldn't read it. There you go Zazz. The pirate version. It's on me. In fact if you look closely at my avatar you'll realize it was me.

Your avatar freaks me the # out !

Did you source the Xtreme hipster beard from Jezza Cabal?

Bob lazar's story is intriguing. If true, them the government works in mysterious ways

Not mysterious enough to hire him for anything of importance.
Just imagine if the US actually had an alien vehicle, and I don’t think there’s any evidence they ever had, but hypothetically if they did what would possess them to hire a low tech clown like him?

posted on Aug, 4 2019 @ 03:40 PM
link
I literally laughed out loud at the description of Lazar's stressful long hours at work.

As if his story is not seeped in enough BS now they are just scooping # on top of it.

I never believed his claims but I had more respect for Bob when he just went away. Now that he's back and writing a autobiography I would like to see him actually do time.

It depends what you mean by "if true".

Remember Bob never changed his story. That is the mantra the Bob believers all chant. He isn't in it to make money it was that mad, barefoot, "young" #cough# film maker who prized him out of his shell to produce a movie and put it on Youtube for everyone to watch for free.......Now we have his free book coming out. He of course donates all of his royalties from his sports model plastic models and other paraphernalia to help homeless aliens from Zeta Reticuli 2.

It really isn't worth picking his story apart and pointing the many other things wrong to Lazar Questers. They are so deep into believing all his mythology that telling them these things just annoys them and entrenches their beliefs even more.

Oh yes of course the same story
His initial claim they got the donated spaceships from a intergalactic trading delegation from ZR changing to he thinks they found them from an archaeological dig.
He's never flounced once, never ever ever

However more than all that I really wonder why his story has been resurrected all these years later.

No actually I don't. Every sixty seconds a new sucker comes along who believes it.