Exellent UFO footage out of Utah taken in 2016 just now posted Clear What do you think ATS?

It sure looks like the object could be moving in those three frames to me. 🙄 Not a lot certainly, but a little bit. Enough to match the background plane's movement, at least....
edit on 24-2-2019 by TruthS3rum because: (no reason given)

You have a PM waiting. Please click this link right here to check your inbox.

I don't know what you think you see, but the object is not moving at all. There are some normal artifacts around it that may confuse you, but the UFO is only 2 squares and those squares do not move even a little.

Add to the fact that these 3 frames were taken directly after the UFO instantly popped into the scene in that position, and it all points towards the creator(s) making a little mistake - they presented the UFO in the scene 4 frames before the movement animation started.

The chances of a UFO popping into existence and instantly moving in such a way to be locked with the micro movements of a little camera thousands of feet away on a vibrating drone so that it doesn't appear to even be a part of the scene (as if it was stuck to the lens of the camera) are astronomical.

Especially considering these micro movements of the camera would translate to several hundred feet of movement the UFO would have to do in precisely the exact amount each frame in order to appear as it does. It would be like it is quantum locked with the camera and that is ridiculous to even consider.

Even more curious is how the UFO begins to move after popping into existence and perfect movement synchronization with the camera for 4 frames - it just instantly goes from 0 to 100% with no gradual acceleration.

The evidence for this being a simple animation is adding up.

posted on Feb, 25 2019 @ 12:29 PM
link
I actually do think it's CGI but I also don't think you've found proof in the pixels moving or not moving, sorry man. Your circled appearances of the craft are way too unclear, to count as proof, either way.

How is it unclear? The the GIFs show the very first few frames the UFO becomes visible in the video. The GIF's are taken out of context somewhat as you can't clearly see it is the UFO, but if you find these frames in the video then it is plainly obvious. The GIFs are to show the entire scene is moving but the UFO is not, which means the UFO was not in the scene but added on top as it would be if it was a CGI element added to the video.

Maybe several decades of video and image forensics are required to fully understand this.

Repect to ' both sides', any chance, this far down the line, ( with respect, of all analysis) Rob Woodus,Tri Hiker or Tri Biker? (not on here) TruthSerum,and, obviously all those, who have weighed in, on this thread,...So, who, votes, CGI against, not CGI?, no idea what it is,in other words, absolutely 100 per cent CGI, or not, against, what? ,if it was actually filmed,who knows what that was.
As an aside, ( yes, I know a decade ago,and debated and debated) Turkey, 2009, if? That was a 'crusie ship' it should have taken minutes, to debunk,last I read up,was, 'camera trickery' which, all things being equal, takes a quantom leap of faith? As a conclusion.
Best wishes All

posted on Feb, 27 2019 @ 07:53 AM
link
'what if' footage was posted ( with all metadata) and not just that, but footage, of what was ( was not? ) filmed by the drone,on the day, ( proovable footage) ' Of The Footage, being reviewed,on the same day, in a hotel, and film of the review,( filming the the review of the review) if you grasp the concept? ,would mean that was CGI 'Ed, in less than an hour?..

The first one is convincing to make your point. The object is closer than the moving ridge line so if the ridge line is moving you can't make a parallax argument to explain why the object doesn't also move.

In the second one you could make the parallax argument. If a background object is far enough away, the reason it might not track foreground movement is the background movement would need to add up to at least some threshold fraction of a pixel to move, and if it's too far away the movement might not reach that threshold to move an entire pixel.

So, even if I am not convinced by your second gif, I think your first gif does make your point. I was on the fence before about whether it was GCI or not. I wanted to believe the producer because he sounds so sincere when he says he doesn't know CGI etc, but maybe that could be true if someone else added the object.

Here's a skeptical video suggesting evidence the object was added, though I'm not sure it reached the level of (solved) as the title claims, but the evidence is suggestive of an added object according to the analysis.


originally posted by: More1ThanAny1
Then when you argue about how the UFO is moving in way that suggests its fake they will say, "this UFO can probably bend space time, and use magical pixie dust to create a wormhole, and pass through into a holographic alternate universe where the laws of physics don't exist" so anything can be explained away.

Pixie dust is really magical so it can do anything you want it to do. But I know what you mean, the argument is usually something like aliens have such advanced tech they don't have to follow our laws of physics, yet somehow those same people may try to use what they say is our too limited understanding of physics to support their view. Traveling though the lower atmosphere at 9,000 mph is no problem using either pixie dust or alien technology beyond our understanding, or so I'm told. I have no doubt that some aliens could have technology far more advanced than ours, but I'm not as convinced that will enable them to defy the laws of physics.

originally posted by: BASSPLYR
Can halo or ring like artifacts also be found with compression issues or from inserting a image into video? I bet something similar is a possibility.

I have seen dark halo artifacts added by video processing I've done personally, especially when using sharpening algorithms. This is not from my work but it shows an example of a dark halo around the guitar string where it says "oversharpened", just to the right of the middle in the top view you can see the artifacts. 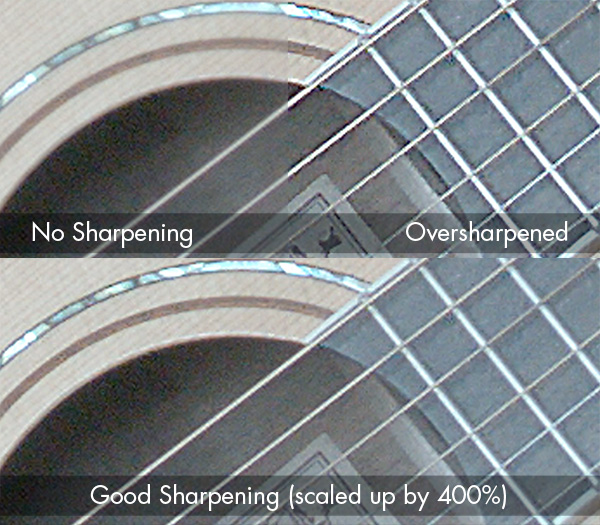 Unless it's from gravitational redshift, but it's not.

That's not to say that sharpening is the only way such dark halo artifacts could be produced, there could also be some way it could happen from inserting an object into a video, but as the guitar string example shows, I don't think the halo can be evidence of an added object.

edit on 2019227 by Arbitrageur because: clarification

I understand your concerns with the second GIF which is why I posted the first GIF - to show that objects beyond the UFO are moving so parallax laws suggest the UFO should be moving as well (at least as much as the mountains).

Keeping in mind both GIFs are taken from the same frames, I could have done this all in one image. However the pixels of the UFO at this point in the video are too small to see clearly from any further out so I split them in two to get the foreground and the sky in the zoomed in GIF.

Since both GIFs are from the same frames, it also shows that the entire camera moved, so there is no reason for the UFO to be still.