Why Trump is the perfect Puppet of the Deep State

posted on Dec, 6 2018 @ 11:39 AM
link
Unfortunately, a lot of the folks here now have little background in really understanding how the deep state works.

That’s another thing Trump has done ( by design btw)made the idea of the deep state merely a leftist liberal abortion group and not the sinister murderers who did 911 and the Iraq war and the war on the ME.

The very ignorant people like Alex Jones (who should know better) saying the deep state is just a group of liberals is abominably ignorant and absolutely false.

posted on Dec, 6 2018 @ 11:46 AM
link
The term deep state was first emphasized by the renowned conspiracy and deep political commentator and author Peter Dale Scott.


originally posted by: olaru12
I don't think we have much to worry about....

trump was chosen by God. Don't that mean anything to you?


What this means is your easily influenced by propaganda.

The POTUS was elected by the people.

Gods mighty hand was working thru his chosen people. Trump has a "biblical mandate"

Wow, what a useless post. If you're going to respond to me, you respond to me with a coherent post and not useless dribble you're so fond of.

I think what you really mean is he can do whatever the deep state DON'T want because he is not beholden to them, but your mileage may vary.


If Trump isn’t a puppet of the deep state just like Obama, Hillary, Bush and all of the presidents then why does he do the same things they do like bomb the ME killing so many civilians. He bombed Syria twice!

TRUMP HAS ALREADY KILLED MORE CIVILIANS THAN OBAMA IN U.S. FIGHT AGAINST ISIS

"according to the latest estimate by a U.K.-based monitor."

No thanks, we simply don't believe you and that article isn't indicative of truth either.

Isn't this proof enough for you of trumps divinity? 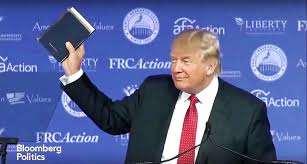 for your information that's the Holy Word in his blessed hands.

And the rationalizations get more and more elaborate and pathetic.

Tell me, if he was the chosen one all along, why did the media and nearly every politician on all sides pull out all the stops to prevent him from winning? They belittled and demonized him from the day he threw his hat in the ring. Seems like an extremely risky, unnecessary, and expensive master plan! There wasn't a simpler way?

Expect soon to have for president Pence, the neocon's dream candidate: Bush III

I’m over here hoping Pence goes down too. So Republicans are stuck living under a Nancy Pelosi presidency.

That would cement my faith in a benevolent God and universe.


Did I miss something? How is ‘Trump going to be dumped very soon’?


Someone hasn't been paying attention.

Yea most people on ATS already automatically ignores your posts.

Too bad... You have such wonderful contributions to the community...

originally posted by: olaru12
I don't think we have much to worry about....

trump was chosen by God. Don't that mean anything to you?

there is proof that God made trump perfect....it's in the Bible.


Just so We are ALL on the same page, You are referring to King James Version II; 3rd re-write; 4th re-vision? I wouldn't want an argument to ensue.. If I am late to the debate, could someone ascertain the answer to the question about "The Truth" not EVER changing, and also NOT needing any "sales folks", "shrines" and the like...

Segue: Could a good looking guy just show up @Netflix™ lots and submit an 8X10 and glamour shot to get on a series???

LOL! Thanks for the laugh!

Conservatives don't want a "Bush III", that's why Jeb was the first one pushed out of the race early on in 2016.

You don’t see the neocons getting back in the good graces of the media and the people because of Trump?

With the media maybe, but not with American citizens. The media screwed themselves and now they want to go back and claim the establishment as the lesser of two evils. Not going to happen with the American public.


Segue: Could a good looking guy just show up @Netflix™ lots and submit an 8X10 and glamour shot to get on a series???

Anythings possible for very attractive people. It also helps to be union SAG and have a talent agent to open the audition doors.

fyi, I'm about as brutally handsome as humanly possible and if I get even a small union scale role...it's happy dance time.

You are more right than you know and I had to sign in to comment and give you some support (I do not comment much anymore). I've been on ATS for a very long time and although not as old as some members I've been watching and studying the world for quite some time. It truly is unfortunate what has become of ATS. There used to be such rich debate and threads filled with profundity. But partisanship and divisiveness infects everything - another symptom of the grand psychological operation at play.

People over and over again fail to understand true power. Normal people just cannot do it. Their imagination fails them. There are people in control of this world, who've been in control for a long time, and they know just how to manipulate not just the individual but especially groups of people. They've had the best of the best studying the mind. The Establishment has infinite resources at it's disposal.

Kudos on knowing Peter Dale Scott. Any serious and rational observer of the world should be familiar with him, as they would be Chomsky, Zinn, or Hersh.

On the subject at hand - Trump is absolutely a psychological operation, the size of which is on par with something like 9/11. Probably bigger. A commenter above said it is ridiculous to suggest any such deep state would help Trump to win, that the media and everyone was against Trump from the beginning. This is wholly inaccurate. Trump got more screen time then any modern political candidate EVER. And are you forgetting Comey and his role in sabotaging Hillary? You people who support Trump are like a person in a dark room with a flashlight arguing the only thing actually in the room is just what you can see in the beam of light. In other words, you are supremely ignorant. But we all are, to one degree or another. You're just falling way behind.

Trump serves to delegitimize legitimate subjects and worries by promoting them. For example, he rails against the Deep State. Something that does exists. But he knows no facts. He is an idiot. And he spits all kinds of partisan nonsense. So by association, to any uneducated or uninitiated outsider, the Deep State must be a crazy idea. Same with fake news. This exists. The corporate media is fake and continually manipulates and conditions the populace. But Trump is an idiot. He blames it on leftists instead of the true villains. And once again discredits that line of thought.

Perhaps the biggest reason Trump exists is to sow division. That might as well be Rule #1 at any Bilderberg meeting. What are we doing to sow division and keep the spotlight off of us and keep the people hating each other? The Left vs Right paradigm is their greatest creation. Because people love it. It fulfills the belonging they crave. And it gives them a team to root for. And a team to root against.

Also, whoever said Trump's time is coming to an end is 100% correct. Anyone who cannot see the writing on the wall as it pertains to this is certifiably blind. Whether he is guilty of anything or not is irrelevant (he is of course a criminal), he will be ousted, and if they cannot do it judicially then they'll just put a bullet in his head. And he will fulfill his final function.

Enjoy the show, ladies and gentlemen. And stop arguing with idiots. Just stop. It's that easy.

EDIT: To clarify some thoughts - Just because the media seems to hate Trump, or DOES hate him, does not mean they are not promoting him. As I said, he had more TV time than anyone, ever. He was essentially pushed onto the American people. Oh by the way, let's not forget also that he lost the popular vote. That MFer had less votes than his opponent but still won the presidency. People just can't wrap their minds around the fact that Trump is EXACTLY what the Establishment wanted.

It is a production, people. A drama. But it is a living, breathing thing. They have to continually strategize and shift their plans to accommodate that which is playing out. They knew they could get Trump in, and they have all they need to take him out, it's just a matter of getting from A to B.


Does the driving gig include a run through the Buffet Table? I remember the Hells Angels™ worked on "Sphere" for Security and even at 0300 hrs. although cold the lobster went down real smooth...


Enjoy the show, ladies and gentlemen. And stop arguing with idiots. Just stop. It's that easy.

Idiots are the show!! If I couldn't argue with idiots, I wouldn't even bother logging on.

To each their own, my friend.

I've always lived by Twain's words: "Never argue with a fool, onlookers may not be able to tell the difference."

posted on Dec, 6 2018 @ 01:13 PM
link
Craft services is always open for everyone... Catering is open to BG/drivers after the crew has finished. Sometimes they beg you to take the sushi home so they don't have to throw it in the trash, same with burritos.

Thanks. As far as I’m concerned you’ve written one of the finest posts I’ve read in years on ATS.
And not because you agree with me…

My concern is to educate these folks and you put things better than I could or have time to put them.