Kanye and trump make a cute couple. Not as cute a putin and trump but still real cute. 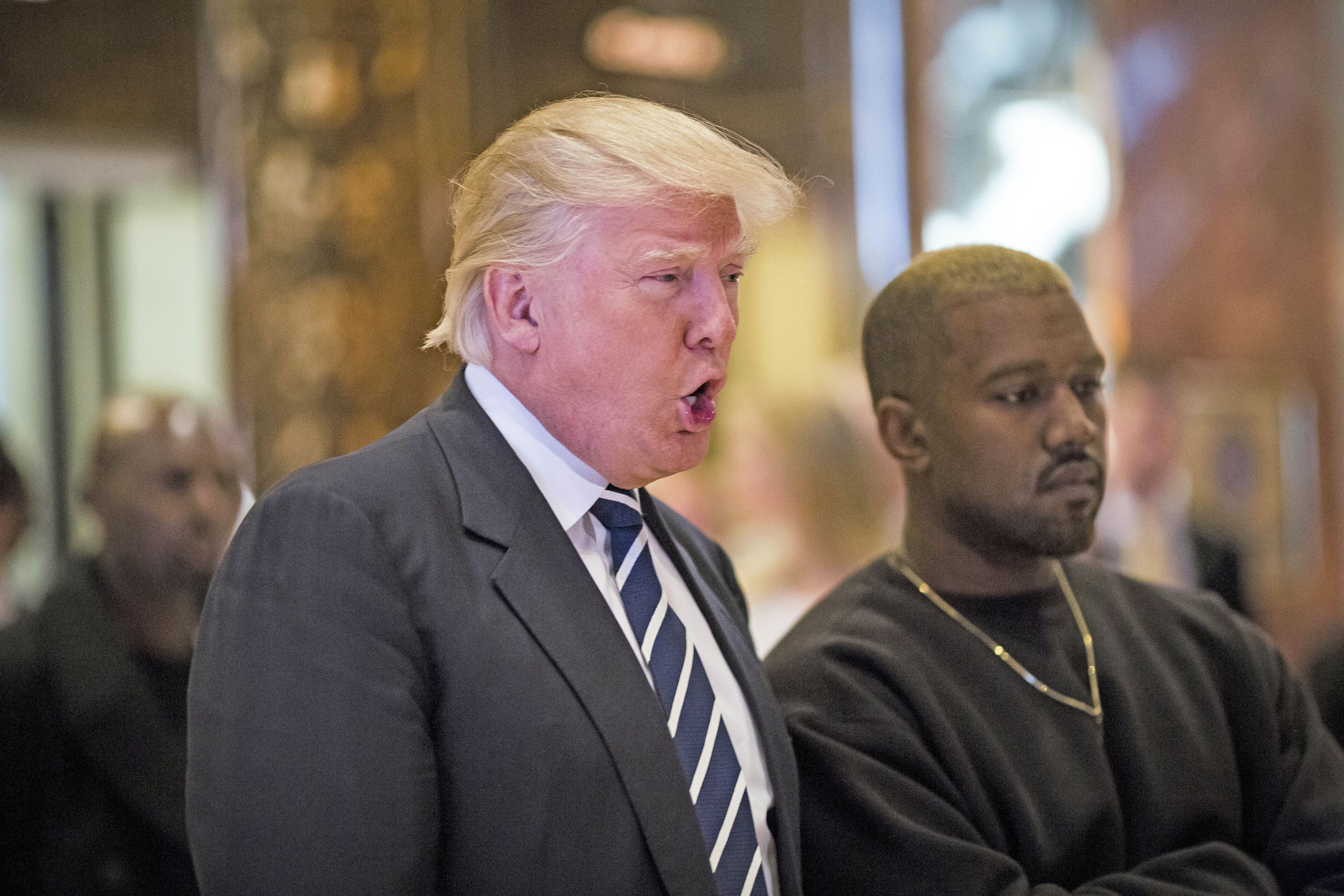 
Kanye and trump make a cute couple. Not as cute a putin and trump but still real cute.

You mean "not as cute as Hillary/DNC and Putin" right?... After all, the Steele Dossier was a hit piece by a foreign spy who worked with the Russians, and made a report full of Russian lies, and the claims from an Australian pro-HIllary politician who heard a claim from a 3rd and 4th person view point, who were all paid off by Hillary/the DNC...

You forget the over $250 million U.S.D. that the Clintons got...from the Russians meanwhile Shillary helped approve deals that helped the Russians, and her family's bank accounts... The irony and idiocy of the left has no limits...

originally posted by: seagull
a reply to: Agree2Disagree

As well as using multiple sources. The more you use, the clearer the picture.

Not really when the majority of the "mainstream sources" are controlled by the maniacal left, and when they have been working over time to shut down conservative/independent media sources under the guise of "combating fake news..."

If nothing else, watch the videos with the sound off in some cases, or find the transcripts and read the commentary for yourself.

There are any number of ways to defeat bias in reporting.

What are you ranting about. I just said trump and Kaneway make a cute couple.

It's a hell of a lot better than team "D" at the moment or for the last 10 years.

originally posted by: olaru12
a reply to: ElectricUniverse

What are you ranting about. I just said trump and Kaneway make a cute couple.

To quote you again since you seem to have forgotten half of your argument...

Kanye and trump make a cute couple. Not as cute a putin and trump but still real cute.

a reply to: seagull


A million stars if I could.

posted on Oct, 14 2018 @ 04:17 AM
link
“Republicans approve of the American farmer, but they are willing to help him go broke. They stand four-square for the American home--but not for housing. They are strong for labor--but they are stronger for restricting labor's rights. They favor minimum wage--the smaller the minimum wage the better. They endorse educational opportunity for all--but they won't spend money for teachers or for schools. They think modern medical care and hospitals are fine--for people who can afford them. They consider electrical power a great blessing--but only when the private power companies get their rake-off. They think American standard of living is a fine thing--so long as it doesn't spread to all the people. And they admire of Government of the United States so much that they would like to buy it.”
― Harry S. Truman

“Mark my word, if and when these preachers get control of the [Republican] party, and they're sure trying to do so, it's going to be a terrible damn problem. Frankly, these people frighten me. Politics and governing demand compromise. But these Christians believe they are acting in the name of God, so they can't and won't compromise. I know, I've tried to deal with them.”
― Barry Goldwater

But the main point I was trying to make with this thread is:


“Extremes to the right and to the left of any political dispute are always wrong.”
― Dwight D. Eisenhower

Wow.... that's some of the most antiquated atatements I have ever seen applied to a modern discussion. Congratulations! Did Moses say something bad about Republicans too?

And Frank Zappa... I like some of his music, but really... this is the kind of guy you think we should all listen to?

originally posted by: underwerks
Of course. Why wouldn’t I vote for Trump?

He’s saving the environment by putting enemies of the environment in charge of protecting it, he’s anti-war, ratcheting up the drone program and killing more civilians than Obama could on his best day.

He’s taken big money out of politics by appointing lobbyists to high positions. Plus the country has never been more united, just look around. He’s made America the leader of the world by alienating our allies and cozying up to dictators. He’s already golfed more than Obama did in his whole 8 years and spent millions of taxpayer dollars at his own resorts, any sportsman and businessman should appreciate that.

He tells the truth when he lies, which is something no other president has ever done. He calls out losers like Puerto Rico and prisoners of war, he wonders why he can’t take people’s guns first and then go through due process second.

And more importantly, he has a smoking hot wife and is a faithful husband like a good Christian should be. While Obama was really a secretly gay Muslim married to a man.

I think the choice is pretty clear..

He doen't represent me - Yes I was one of those Hillay haters that supported him in the last election.

But he lied - He came across as an independent - An outsider battling the consumate insider politcal establishment.

But his years in office so far has shown that Trump is a solid conservative Republcan who represents big money and big business.

Duh, that should have been obvious from the start. The guy is a leading figure in what you call "big money and big business", that's how he made his wealth. Perhaps you were blinded by your own greed or concerns for the material, thinking he was going to be useful on that front for you personally.

You could have also expected him to be on the side of the so-called military industrial complex in case you didn't:

The so-called "War on Terror" continues with no end in sight (regardless of political claims to the contrary, such as the one made by Obama on 23 May 2013 that the Global War on Terror is over; yeah sure, like Trump is anti-deep state right? Anti-globalism and anti-"big business"? "An outsider battling the consumate insider politcal establishment"?). Budgets and expenditures for those involved in any way (including intelligence agencies and security) continue to increase along with terrorism. Terrorism that is sometimes even funded by the same intelligence agencies that stand to gain financially from increased terrorism (i.e. failure to the job that they are paid for). It's rather counterproductive.
edit on 14-10-2018 by whereislogic because: (no reason given)

Wow.... that's some of the most antiquated atatements I have ever seen applied to a modern discussion. Congratulations! Did Moses say something bad about Republicans too?

And Frank Zappa... I like some of his music, but really... this is the kind of guy you think we should all listen to?

Classic quotes are just that - Classic! Harry Truman's quote on the negative aspects of Republican policy
are in many ways still valid even if from 60 years ago - And thats' a continuous problem with American
politics - And wy I voted for Tump, and might still vote for him in 2020.

BUT - and otherwise will probably vote straight Democratic.

I'm becoming one of those people, probably a huge part of voters, who automatically votes for the party not
in power.

AGAIN, and one of the reasons I started this post, if you think having the 'Libtards" in power could be a nightmsre
- Yes I agree - In the last election my worst nightmare was Hillay Clinton winning with both a Democratic Senate
and House.

But giving Trump full control, with an all Conservative congress, in the long rung will also become a nightmare
even if there is a short term boost to the economy.

And yes Moses did say somethihg bad about Republicans - It had something to do with people worhshiping
a 'Golden Calf'.

Point being People not money should come first - Especially in the politics of today!

Yes, more jobs in a booming economy is good - But people losing their life savings because of catastrophic illees is not acceptable......
No civilized nation can call itself civilized or modern if it doesnt supply at least basic healthcare to all its people!

It's Time for a New Political Party in the United States

Classic quotes are classic, until they become antiquated as things change. For instance, I am a liberal... or I was back then. Now I'm called a conservative but my views have not changed. What's changed is the definition. Back when I was young, the Democrats referred to the "Solid South"... I don't think we even had a single Republican on a ballot until I was in my teens. Today, the South is considered solid Republican. We didn't change. What changed was the parties.

In that respect, your quotes are definitely antiquated and no longer valid. People change, groups change... did you know, for instance, that the original KKK was organized to fight against political corruption? Today it's a dead/dying racist hate group.

And yes Moses did say somethihg bad about Republicans


Point being People not money should come first - Especially in the politics of today!


Point is, people need to eat... eating costs money. What you advocate is akin to starving the people. I wish you could see that.

Yes, more jobs in a booming economy is good - But people losing their life savings because of catastrophic illees is not acceptable......

When you decide you want to give all the people healthcare, let me know. Until then, don't try to BS an old BSer.