Just watched THElastJEDI, This is what I learned.

This is what I learned from Rian Johnson's movie.

Back in episode IV, when Luke blew up the Death Star, he killed Obi Wan.

That's what I learned from Rian Johnson's movie.

posted on Aug, 30 2018 @ 12:32 AM
link
Don't remember much about all of the nine or whatever movies but how so???
If he did then obi wan forgave him because he seemed like a happy ghost at the end of VI.
lol idk

Obi-wan sacrificed himself and became a force ghost in 'A New Hope.'

How did you reach your conclusion from 'The Last Jedi?'

Rian Johnson is a talentless hack.
edit on 30-8-2018 by DieGloke because: (no reason given)

When Luke "passed on" in TLJ, the dice he brought disappeared. When Obi Wan appears to be struck down, his robe remained. He wasn't dead yet. Probably somewhere on the Station meditating naked.

It's all in the dice.

This is what I learned from Rian Johnson's movie.

They are good film's in there own right but in no way worthy of the star wars title.
Disney seem set on a course to destroy much of the star wars legacy and to mold it the way they want it to be but even with the dreadful metchlorian's and youngling's Lucasart's Prequel trilogy were actually better than what disney has done with the franchise (and had they gone ahead and revealed Jar Jar Bink's there most despised character was actually a sith Lord and not cut out Padme's knife behind her back seen when she last see's Anakin then Lucas could have saved the reputation of that trilogy with a truly adult twist worthy of the fan's whom saw the original star wars when they were kid's).

So far despite fantastic special effect's Disney have failed to capture the atmosphere of the star wars saga, they have failed to make film's worthy of the name and there plot line is utterly and unreservedly crap, there story seem's contrived and yet to fit there poor plot into the star wars universe they have now made non cannon much star wars lore which was fully cannon, even to deciding that the old republic is no longer cannon lore.

Great as a stand alone series of movies but overshadowed and paled into utter insignificance by the franchise they pretend too.

In fact they plot, destroying Coruscant and the core worlds, the seat of most of the franchise intrigue and back stabbing was a very bad move that would only have been made if the intent was to kill off the star wars franchise once and for all as if Disney are pissing all over it and then tearing down a hated edifice that bested them in the past.


They need better writers, better directors and perhaps even to hire some REAL star wars writers.

Even Mark Hammil hates what they have done, Harrison Ford only probably likes it because he has ungrateful actor's buzz were he will always be associated with his star wars character but I doubt other than that he would like the plot at all and poor Carrie Fischer can't they even let her rest in peace Disney have no soul and no respect.

In Episode IV it was Annakin now Darth Vader whom slew his old master and mentor, Alec Guiness (the best Obi Wan - even though he utterly hated the role, never watched the movie and thought of star wars as childish being more of an old fashioned stage actor).
Before Obi ALLOWED Darth to take off his head he warned Darth that if he struck him down he would become greater than Darth would ever imagine and indeed he did becoming one with the force which had nothing to do with Metachlorian's until a very jaded Lucas decided to invent them to replace the original spiritual force of the original trilogy.
Darth never actually touches him though he wing's his light-saber through were Obi's neck was and Obi's mysteriously empty cloak then simply fall's to the floor with no sign of Obi anywhere as he has completely transmuted into the force - not so much a force ghost as one with the force the ultimate enlightenment Jedi masters seek - a bit like the ascension of the ancients in Star Gate.

So Darth killed Obi Wan or rather he tried to and instead Obi Wan was transmuted into a being of pure energy - no metachlorian's like I say.
That was system's away from were Luke finally fires a proton torpedo which is able to pass through the ray shielding of the exhaust vent at the end of a trench bristling with turbo lasers - which mostly miss there targets - and which then starts' a cascade chain reaction of explosion's like domino's going off and finally destroyed the evil super villain's weapon of mass destruction.

How the hell Obi Wan still has his robes when appears as a ghost, when he left it behind when he died? He should be buck naked...

And remember when they wrote the prequel Obi had already defeated Darth once.

And remember the prequels did actually give us the best Sith lord ever, Darth Maul, sadly his part and the plot around him was far too small but he was a pure blood Sith whom were actually a race which had been twisted by the dark side after the old PRE-Jedi Jedi order had fragmented - the old Jedi order had been more like monk's in seclusion seeking balance and had therefore studied both sides of the force rather than specializing in the dark or the light side, when the dark side eventually became imbalanced leading to a rise in the first dark jedi and the counter action of the rise of the Jedi order we know of the dark Jedi had set out to dominate and control the Galaxy, survivor dark jedi of this civil war had settled on a world with a primitive native population which was force sensitive and they had then shaped them into the Sith, later the galactic republic under the Jedi had been forced to exterminate this evil race at least on there home world and that is why when they encounter Darth Maul the Jedi are shocked, a pure blood sith driven not only by the dark side but by his own innate rage against those that had destroyed his people, this however is now Non Cannon according to Disney.

Here is a Youtube video that is actually better than all the Disney movies combined and also sweet and short (also far better fighting than ANY star wars movie). At least it wasn't as bad as "The Farce Awakens".

posted on Aug, 30 2018 @ 07:02 AM
link
Star Wars is dead man. Everyone I know used to get uber hyped over Star Wars movies, and now they don't even care anymore. They don't even talk about it. Sad.

They killed any future Star Wars films with any of those characters. I've posted on other threads about a number of things from a writing perspective that would have fixed some major flaws in the film.

Haven't seen Solo yet and not in a hurry to do so. Scared of how bad it might be.

Rogue One was good but not that good. It didn't have that feel the original 3 films had which it sorely needed. I understand it was basically a WW2 movie but Star Wars and I've seen the ones that probably influenced it (Guns of Navarone, Force 10 from Navarone, Dirty Dozen, etc...). 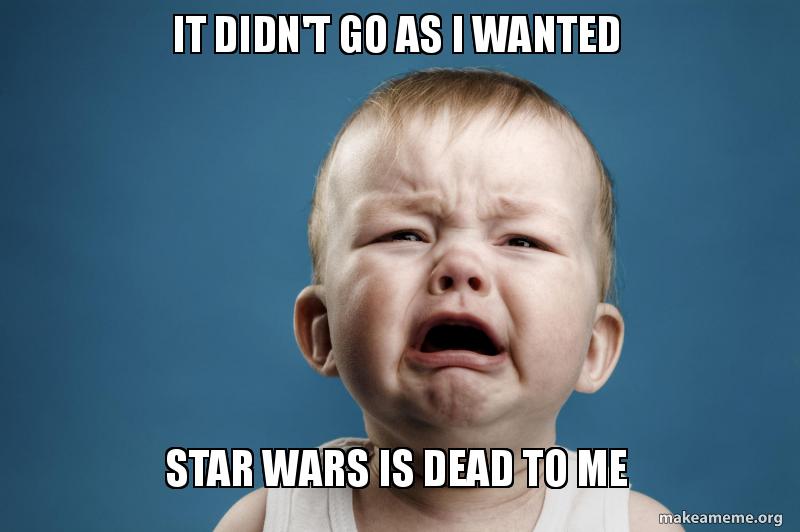 While I wasn't awed by the movies. I thought they were ok for what they were.

It's not like the first 3 movies were perfect. They had their flaws as well.

I think that most of us are viewing these movies through the narrow keyhole of fanboism. And since they aren't exactly the way we would like them. We get angry.

I will agree that in this day and age. There is no reason that they can't find a decent writer to make a story that works and make the films better than they have been. The past two Star Wars films have been mediocre. And I think that JJ Abrams shouldn't be the guy in charge. He's good at some things. But not at this.

posted on Aug, 30 2018 @ 07:39 AM
link
I learned that it was possible to make characters worse than jar jar binks.
And the two kids that played anakin Skywalker are no longer the most hated actors in the franchise.

Disney laid an egg. They could have overcame TFA movie with a strong sequel but instead gave us TLJ.
Bad story.
To much political message.
To many plot holes.

Just no. You can't apply force projection to the older movies unless you also apply flying a ship in hyperspace through the death star.

Why not just autopilot a droid through the stupid thing?

I'm still trying to find out why she saved Finn at the end. A love molded in 48 hours or so just like Finn loving Ray in 48 hours and now we have a love triangle somehow? Just one example of how they kill any kind of character development for me.

I tried watching it again and the only good character is Ray kinda and Kylo.

And how they gonna kill admiral ackbar like its no big deal.

Because I learned a long time ago, from books, that when you have a shared universe with many authors, there will be some duds along the way.

Pretty bad when the best characters are mary sue and Darth emo.

Luke could have died in a bad ass fight scene with the imperial walkers but no, we get to watch the best jedi in the universe milk a deformed walrus.

After watching The Last Jedi, it made me long for the days of Jar Jar Binks.

originally posted by: LABTECH767
a reply to: mikegrouchy


Even Mark Hammil hates what they have done,


That's because the dice disappearing was of major significance when he read the script, so he searched his feelings. "Omg this means Obi was still alive when I blew up the Death Star."