So if Trump does not get reelected who will you blame?

Surely that would be the cleanest election ever run

He hasnt duped anyone. Your reasoning is the same tired excuse from the left, thinking no one can possibly be as smart as they are. In Trump supporters minds he hasnt done anything Obama or Hillary didnt do. He's actually done less of it, despite cries from the left. Seriously, pick a criticism and any informed individual can give you multiple instances of it being done worse by dems. Otherwise, he has actually delivered on campaign promises. Go ahead, look up Obama's miserable firdt term record. Does he say things that strike a negative emotional reaction from the left? Sure! But honestly, no one cares about your feelings except maybe your mom.

Surely that would be the cleanest election ever run 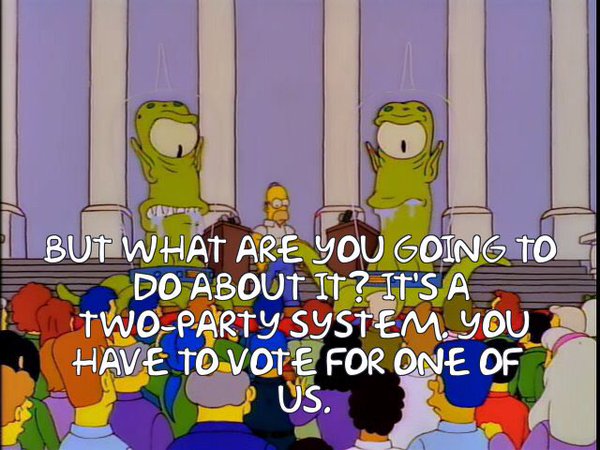 So you are not willing to accept the results of the popular vote...

according to your image, you are a...danger to democracy?

Democracy in the US is little more than a buzz word and phantom concept anyway. We are and always have been a representational republic. Hillary's words may as well have come from the pancake she calls an "ass" for all the actual bearing they have on the American system.

posted on Jul, 19 2018 @ 02:24 PM
link
I believe that unless Oprah or Michelle Obama run or some other person with as big a name and as big a fan base that Trump will win again.

It's really the Dems election to lose. Trump will beat himself by saying or doing something stupid.

Let's say Kamala Harris runs. She's not big name, she's establishment just like Hillary and there will still be division in the liberal ranks. Trump will win unless he shoots himself in the foot.


So you are not willing to accept the results of the popular vote.

Back to Clinton got more votes than Trump.

originally posted by: XAnarchistX
a reply to: seeker1963


You realize in a true democracy the majority rules all, ya? That would mean issues like slavery, most civil rights, welfare, etc would have been nonstarters in this country at the time of their changing if we were a true pure democracy.

Sure, could say the same for any President, past, present and future

They had to erect a FENCE to keep Sanders supporters out,

And yet you'd have us believe Clinton got 'more' votes than Trump?

I mean, as an anarchist, "Democracy" is a statist notion, I don't value it at all... even the social-anarchists and the Reds who call for "Direct Democracy" and "Consensus not Democracy" are just holding hands with the Statist thought...

We run for office against someone else. The people vote. The person with the most vote wins and then represents his people either only locally or at a higher level somewhere.

How about people not willing to understand that the national popular vote means absolutely nothing?

I would blame Trump.

While I think that he's doing a decent job, and far exceeding my expectations in actually getting things accomplished, he still is a very brash, polarizing individual with an immature temperament that rubs a lot of people the wrong way.

But there are also a lot of people, me included, who find his style refreshing in a world of established politicians.

Still, though, I would blame him and nothing more.

Like you, I see a second term for him, if he wants it. I'm willing to bet that, as time goes one, he'll get more and more done that will benefit the nation as a whole, and the more that happens, the more people will really start dismissing and even getting angry at the constant BS lobbed at him in an attempt to get Americans to hate him on false premises. I know that I'm already there.

Democracy in the US is little more than a buzz word and phantom concept anyway. We are and always have been a representational republic. Hillary's words may as well have come from the pancake she calls an "ass" for all the actual bearing they have on the American system.

I will never eat pancakes again.

of course, clearly... but can I assume someone who is pro-democracy (you) would admit that representative democracy is not really "freedom" of choice?

I mean, as an anarchist, "Democracy" is a statist notion, I don't value it at all...

OK, so maybe you'll answer this question finally, seeing as how I've asked it of you on several threads... what do you value? I see you constantly giving, well, everything a big thumbs down. What I have yet to see is any ideas from you on what you don't find unappealing.

You may want to rethink that statement a bit...