originally posted by: SplinterSequence
JA is in custody. This week gotta be good.

20 questions: is the mystery guest that other oft mentioned world famous one? Usually with an @ preceding....

Just asking for a friend


Getting that person to testify is an option yes.

You just told them yourself.

Too Old to be Tobin..

DS has connections to the mob families. Just saying.

Sorry, yes it was splinter.

Not an ice pick, a push dagger.

I get the feeling that personal peace was not what you were going for in your post.

No it was not

posted on Jul, 29 2018 @ 06:40 PM
link
WOW! Tonight YOU all are the show. My Goodness- who’s on first at this point I don’t know. Will need to do a reread of the last 3-4 pages to analyze your interactions say nothing about the Q drops themselves. ‘Sky’ is ‘All Seeing’? X outed Q on this thread? Splinter or Sabre (?) confirmed Q heard? The missile was an attempt?
I’m so lost but still entertained- Netflix has nothing on this. Lol

If it was taken in a mirror, it is to close to not get the reflection of the person taking it, look at the angle

Honestly, the picture of the person walking, that Q posted, looks more like it was taken from a front-facing camera pointing out of the rear window of the vehicle. Like a selfie..but of someone elsie, out of the back window. Front facing cameras generally mirror the images.

originally posted by: dashen
a reply to: All Seeing Eye

greetings ancient one!
i welcome you to our humble thread


Actually, I was a member of the previous message board, and at one time a Super Mod. But politics being what it is, I was retired from that position. And, I was quite humbled for it.

Thank you for the welcome..

Yes he does Care;

Maybe the Red triangle is therefore a warning triangle? As in an emergency stop by the car pic was taken from?


The orange triangle could be a sticker on the vehicles window?

It is. Good call.

I'm not going to go find it again...but, it looked to me, like it was taken from in a car, through the driver's side window, off of the exterior rear view mirror.

I think that pic was to remind us of the Iridium
Communication satellites because the same day the LV pics were dropped.

This is why we need a space force. Those Iridium satellites control our comms. Q says that HRC/BO sold our secret space technology (SAP's) to someone to line their pockets. Now with what I am understanding these satellites not only control internet/phones but also GPS and uplinks for vehicles, boats/ships and planes/choppers. Maybe I am reading it wrong. So if this is true then a back door into this would be catastrophic.

Q mentions the C_A a lot. This book came up searching ID codes of Q's. Remember when In-Q-tel was mentioned?

Going back to the point about LV. I made a post a while back about a huge data center in Henderson NV. It houses the CIA through Amazon and a whole host of other companies.

Now I can't prove this but I read somewhere that Paddock owned a house, company office, had storage, and even his doctor was in Henderson NV. Also a couple who were witnesses in LV massacre lived in Henderson. They were killed which I cited above.

Not sure what to think but something doesn't add up. I think I remember Q implying that the technology was sold to China. Can't find the drop. Makes me wonder what else they have/had planned with this technology/back door access.

Interesting for sure. Much to dissect and analyze here.

Neon Revolt, a well known self-described 'translator' of Q, has a blog site by the same name where he posts his analyses of Q's drops on a very regular basis. He now receives 100,000 + hits per day and is a very influential figure in the Q-cult movement.

Well, today's entry was an epic rant, expressing rage and frustration at his dear but overly-cryptic leader, Q. This rageful rant is better than any similar rant I've seen expressed here on ATS by the naysayers and debunkers; in fact, it corroborates some of their arguments against Q.

A debunk of Q coming from probably one of the most-read, dedicated Q-Cultists of all of the movement, makes it that much more interesting, to say the least.

Neon Revolt's faithful followers left their comments for him on his post. 90% of them tell him not to give up; how much they depend on him to interpret Q for them; how important he is to red-pilling the masses.

Some of them were very disappointed with NeonRevolt's attitute and worry that his rant may make a negative impression on newbies, scaring them off.

For that reason, I won't be surprised if he recants and deletes his epic post. Before he does, first, here is the link to his post: Furious Q! #QAnon's Communication Gap. #NewQ #GreatAwakening - Neon Revolt

Next, here are some highlights that I find noteworthy:

Neon refers to a question posed to Q by an Anon and Q's answer: 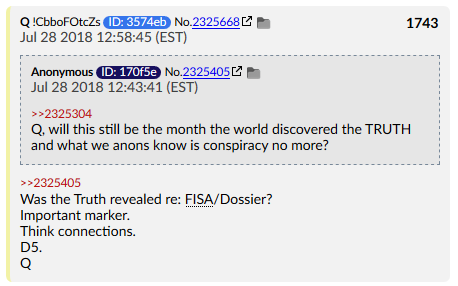 Here's what Neon writes in response:

No, the full truth is still redacted. If the “Important marker” Q is referring to is D5… Golly, I don’t have a clue what Q is trying to communicate here.

After a round of mental gymnastics, he writes,


Just spitballing here, because I’m drawing a blank on everything else. If none of these are it, D5 remains completely meaningless to me.

Here's where things heat up:

Here’s where Q starts to get mad, and I, in return, get mad back: 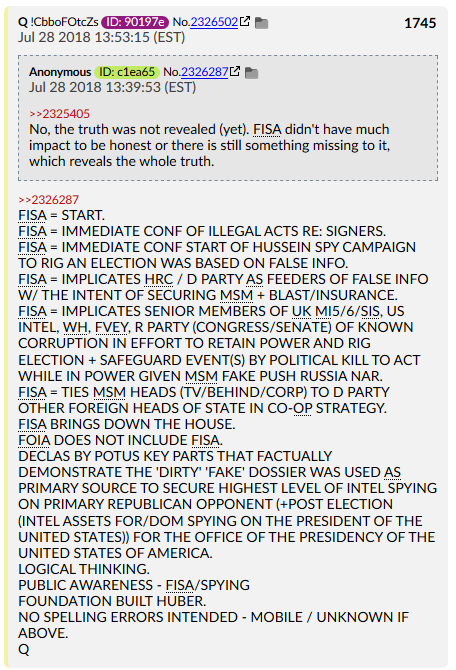 I don’t understand why Q does this. It reads like he’s frustrated with us, but I don’t get why he then chooses to focus on rehashed information we already know. THIS is the stuff we already understand. This is actually the really obvious stuff, understood by pretty much all the anons who visit the boards regularly. So why the shift in tone and why waste everyone’s time (yes, waste) going over it YET AGAIN? ALL of this is understood already, multiple times over. NO new intel is in this drop, despite the ANGRY ALL CAPS. This isn’t the stuff we’re not getting, Q. There’s plenty we don’t understand, but this, all of this, is already understood.

WE KNOW THIS ALREADY, Q.

Then Neon loses it, claiming to have a 140+ IQ but still can't decypher what Q is getting at:

And I realize all you operators are in a lot of danger. I pray for you guys regularly. And I do what I can here to help speed up and spread awareness every day. Honestly, I’m basically one of the only intermediate “translators” you’ve got, Q, because frankly, it takes someone with an IQ over 140+ and a ton of time, technical ability AND creative skills, to not only understand your COMPLETELY CRYPTIC AND OFTEN INDECIPHERABLE posts (let alone keep up with them), but to then turn around quickly and (attempt to) communicate their intended meaning to the normie-sphere in a way the masses can understand. (Sure, there are others. And I don’t mean to discount them and their work at all. And yes, I owe a huge debt to other anons, and yes, your reach is huge, Q, but when it comes to approachable, understandable, up-to-date Q translations – Q, I’m getting 100,000+ hits a day now, and it’s only going to keep growing. Surely you know this already. And surely you know all about me and my background – so you know everything I just said is true, and you know what I’ve already accomplished on the boards – let alone the influence this page has on the boards. Was it any coincidence, for instance, that I quoted Andrew Jackson here on the site when explaining the Fed situation in my recent article, and then that same quote appears in the notables the next day? Of course not. And that’s fine; I’m not looking for credit or anything so shallow. I just want a country free of #TheCabal. I’ve already had a decade+ stolen from me; I don’t want the next 4, 5, 6 decades+ to be the same). (And really, why do you think so many people even call it “The Cabal” to begin with? I popularized that name. And I’m not trying to hang on this or toot my own horn here – but just trying to highlight the communication gap we have going on here).

Oh the frustration! Can you feel it?

Information will spread – but only if it’s understood. Am I better at communicating with the masses than you, even with all your military expertise and resources? I’m just one guy with a WordPress blog. Sure, you “know” everything. But that doesn’t mean you’re understood. I’m not saying I’m not grateful, Q. I really am, and I’m doing everything in my power to help. I’m with you in this. But if you’re reading this, we really understand all of this already. What you just wrote – none of that is a problem to our understanding. It’s the markers, the double-meanings, the clock, the map, the keystone (god, the @#$$%@#ing map and keystone) – those are the things we don’t understand. Saying things like we “have more than we know” over and over and over and over and over and over and over and over doesn’t help anyone. That’s like telling us there’s oil underground somewhere in the state of Texas, and that we should start drilling if we want to get to it. (Oh, there are signs planted strategically along the way that point to where this oil reserve is… but they’re written in Klingon, so good luck). Sure, I see your “markers.” Sometimes, I think I have an idea what they’re pointing to. But mostly I look at it and go, “Yup. That’s a big ol’ sign written in Klingon” and move on (see: the D5 section above – which, btw, is a distillation of all the major thoughts Anons have had on the subject, and an original thought by yours truly, but which is probably still wrong because there will be something you’ll say we missed). Greeeeeeeeaat… but we still don’t know where to drill, let alone know how to build a big enough drill to tap it.

And you get frustrated with us? If we’re not picking up what you’re putting down, it’s because you and all your military friends haven’t figured out a way to communicate competently with the masses. YOU’VE GOT SIGNAL, MEDIUM, AND RECEIVER – AND THE PROBLEM ISN’T WITH THE MEDIUM OR THE RECEIVER. I don’t think I’ve ever seen such a large mass of humanity cling to someone’s words as much as they cling to yours, Q. No, what YOU have is a COMMUNICATION GAP, Q. I mean, you’re not even trying to communicate with normies here. You’re communicating with the Autists – and if WE’RE ALL NOT GETTING IT, the normies don’t stand a snowball’s chance of ever understanding. And WHY is that so important?