So declassify marijuana. It's neither a narcotic or a drug.

Cannabis is a drug, along side caffeine, nicotine, alcohol etc.

It's a relatively benign drug, but a drug nonetheless.

Everything is a drug.

originally posted by: DieGloke
a reply to: one4all

Or Canada just ignores U.N. treaties like every other country does.

This is bigger than the treaties because when the medical properties of MJ become widespread and mainstream big pharma is so screwed....TPTB have been playing this little game for far to long now and it is time for the ENDGAME....they have been hiding the CAUSALITY OF CANCER AND ALL DISEASES and making Quadrillions of dollars off of global humanity....its all been a delay tactic simply because once people learn about WHY MJ HAS BENEFICIAL MEDICAL IMPACTS they will learn that it is the ANTI-PARASITIC PROPERTIES that make it valuable...BUT THEN....people will ask WHY DOES KILLING PARASITE CURE CANCER AND ALL DISEASES.....and then the FIREWORKS WILL REALLY BEGIN...…..because then people will know what has been done to them in terms of FARMING FREAKING PARASITES WITHIN ALL OF OUR BODIES SO WE REMAIN SICK AND DEPENDANT ON BIG PHARMA AND THEIR CON-JOBS....understand that inquiring minds will soon be tracking and backtracking every single arm of the octopuss .....they will know what things were put in their water and food and environment that CONTRIBUTE TO THEM BEING INFECTED WITH PARASITES AND CONTRIBUTE TO TRIGGERING THE PLEOMORPHIC BACTERIA THAT CAUSES CANCER TO MORPH AND BECOME DEADLY....remember NOW PEOPLE KNOW THAT THIS WAS DONE ON AN AGENDA BASIS.....and as we all very well know in todays viral world it is already far far to late to stop this knowledge from becoming mainstream...change is not imminent it is NOW......and the people pushing for MJ to be socially legalised are the same ones who have suppressed the true medical impacts and values of MJ for a very very long time....there is NO HIDING TODAY.....and all wrongs of the past shall be remedied....as nature dictates.
edit on 28-6-2018 by one4all because: (no reason given)

originally posted by: intrepid
The honorable delegate from Jamaica agrees.


originally posted by: intrepid
The honorable delegate from Jamaica agrees.

I'm wondering how the eateries are at the UN. 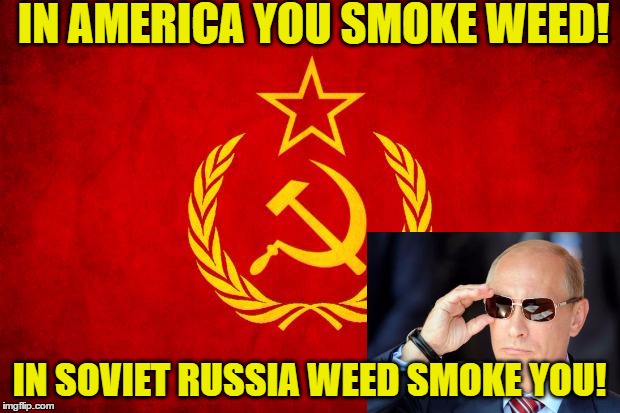 They're using it wrong.

posted on Jun, 28 2018 @ 11:57 AM
link
You may combust MJ all you feel you need to and maybe in the long run combustion is better for you because the burden of truth which prolongs your life when you carry it might give you a coronary...so being in an MJ induced relaxed haze will help you NOT EVER LEARN WHAT YOU ARE MISSING WHEN YOU MISUSE MJ.Remember you can still combust it AND eat it or use it as an anti-parasitic as it was intended to be....but to allow the truth to remain suppressed is not OK anymore....legalised or not the truth needs to be told and explained.This link is what you can easily get if you fail to police normally existing parasites which EVERYONE NATURALLY CARRIES through their lives on earth like every other living thing on this planet does.


So yes...have a laugh about the topic...heck I will laugh with you in the second link so make sure after you watch the first link and it sets in that you them click the 2nd link to get my reaction from a fly-on-the-wall perspective to YOUR REACTION to the truth you had not been recognising for whatever reasons.

posted on Jun, 28 2018 @ 02:21 PM
link
This is actually pretty interesting, since if it was less than a decade ago, the US government would be sending delegates to Canada to threaten them with extremely severe sanctions, if they thought the Canadian government was even considering legalizing cannabis... let alone what the US would of done if Canada had of actually gone though with it.

The US, Russia and Japan, where the main countries who used to police the '1961 Single Convention on Narcotic Drug act' around the world with an iron fist... which is the main reason cannabis has never been legalized on a federal level in any country since the UN 1961 drugs act was enacted.

Gotta say, those Canadians must have some balls for being the first country to actually legalize erb... when you consider how harshly the UN superpower countries have reacted to other countries for merely proposing it in the past.

But fortunately common sense seems to have finally prevailed... The only backlash for Canada so far, is Russia whining about how their upset about it... lol.

the Cannabis Act is now officially law after receiving royal assent this morning.

We have The Royal ok
It's all good now.

For the record, Uruguay was the first. We are the second.

posted on Jun, 28 2018 @ 02:55 PM
link
This is actually all about the Russian government "virtue signaling" to Eastern Europe and Asia.

Russia presents itself as the only bulwark of civilization against the drugs, crime, depravity and Islam that are washing over and drowning "Rome's Children", western culture.

American media doesn't cover it, because the democrat party uses Putin Russia as their bogey man.

Russia presents itself as an avowedly Christian nation. They 'tolerate' other religions and homosexuality to a limited extent; But they are against the godless libertinism that cannot stand against the twin threats of depravity and islam.

This plays extremely well with Christians outside of North America and Europe. While most Eastern-Europeans are intimidated by Russia politically, they see them as the only defender of Christianity. So their rhetoric (which is never reported in the west) bears this out. Putin says Russia backs the Assad Regime in Syria because it is the only nation in the Middle East to protect its Christian minority. Back in the Serbian war, RTTV played non-stop footage of US troops demolishing Christian Churches in Yugoslavia and helping the locals build mosques. In the eyes of most of Christianity outside the US (and amidst islamist populations), the Russians took the moral high ground against an anti-Christian UN.

The UN cultural directorate has excoriated Russia for changing the skyline of the world cultural site known as the Kremlin---Russia is built a massive statue of St. Vladimir, the king who brought (Orthodox) Christianity to Russia.

Marijuana itself carries stiff penalties in Asia, (death in Malaysia). This move is designed to appeal to conservatives in the Eastern half of the globe.

Putin made great use of Obama's pr releases for his own personal punching bag. he never missed an opportunity to note Obama celebrating Eid and Iftar at the White House, or that the National Christmas Tree could contain no actual religious symbols. The press always showed the pictures from Obama's "choom gang" days.

So this is Putin picking on Trudeau and the cultural permissiveness of Canada and the whole west.

Russia needs to get off the high horse. They are afraid of gays and marijuana. I thought Russia and Putin were strong, but unjust fears proves their souls are weak.

I'm tired of the blasphemy that parades itself as righteousness. The one who is righteous has nothing to fear. While the unjust have much to fear
edit on 28-6-2018 by Isurrender73 because: (no reason given)

One that the Canadian government must face at some point in time.

I, as a Canadian, hope that our government does this the proper way. If we are going to implement laws directly against treaties we have signed, we must choose which path we will follow.

Canada will get away with it.


Yeah???... so is killing journalist, jailing politicians and destabilizing other nations.

They are talking about Russia, not about the US

They are talking about Russia, not about the US

Are you implying Russia doesn't do any of the below?

originally posted by: Southern Guardian
a reply to: IgnoranceIsntBlisss

The UN has it and the others banned, and anyone in the UN is therefore supposed to be obligated to ave it banned too.

So because the UN says so..? Canada should disregard the choice of it's people on what they choose to smoke? And I don't think any UN officials have come out and called out Canada for their choice. I'm aware the International Narcotics Control Board expressed concern back in March about the path Canada was going but since this move they haven't made any threats or stated otherwise.

O because canada signed treaties with other countries through the UN banning illegal substances. Had they not signed wouldnt be a big deal however they did. They would be violating a couple of treaties in fact ,the 1961 Single Convention on Narcotic Drugs, the 1971 Convention on Psychotropic Substances, and the 1988 Convention Against Illicit
Traffic in Narcotic Drugs and Psychotropic Substances.

Russia makes a valid point we expect them to abide by human rights treaties and arms proliferation agreements. Yet somehow Canada gets to break the rules? They can request with the UN to be removed from thr treaty but even that it remains in effect for 1 year. The other problem becomes interpol they can still arrest on international drug charges.

But they don't... and they continiously interfere with their neighbours ignoring treaties they've signed. And now they're whining about Canada following democratic processes because of what some law said 50 years ago. Makes sense huh?

originally posted by: Southern Guardian
a reply to: dragonridr

But they don't... and they continiously interfere with their neighbours ignoring treaties they've signed. And now they're whining about Canada following democratic processes because of what some law said 50 years ago. Makes sense huh?

So what your saying is Canada word isnt worth the paper its printed on. So why would any country make any agreement with them if they just decide ah well we changed our mind. If that's their attitude im glad Trump backed out of Nafta. Because apparently their word means nothing on the international stage.

Canada needs to handle this the right way and back out the treaties through the UN. Can take 18 months on one of them but at least they would be doing the right thing and salvaging their reputation. If countries violate treaties then why would any of them agree to them.