Trump Has Awoken A Slumbering Moose(Canada)

Fake news by the MSM desperate to support Justin the libtard after the liberals' crushing defeat to the Conservatives in the Ontario elections, days ago.


originally posted by: Trueman
a reply to: Blue_Jay33


Buy Canadian ? Nobody likes their bacon. Don't you dare share our ace in the hole! 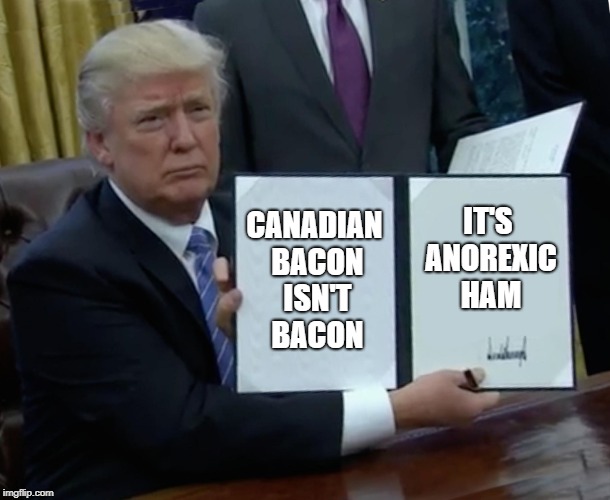 Now the Canadians may escalate up the anger ladder from miffed to cross.

Trump Has Awoken A Slumbering Moose


Somehow that just doesnt have the same feeling as Yamamoto's statement about awakening the sleeping dragon.
In fact , I kinda chuckled when reading the Title as I thought it was in fun...

Canada - this country has quickly overtaken Australia's supreme fantasy of being part of the ridiculous EU.They have almost reached the level of France and may soon catch Germany.
The previous 2 attempts at forming a European Community failed. Yet the leaders back then were wise enough to see it. But , everyone knows the " keep trying the same old thing and expecting a different result" ..
Just EU Wannabes
Even the distant father of Canada , Britain , has decided enough is enough . At least from the people's aspect.
Keep electing officials like Trudeau and Canada may just be there in a year or 2 . The EU needs as many new countries' money as possible to keep the economy afloat.
Reminds me of an old saying "careful what you wish for , you may just get it"

posted on Jun, 13 2018 @ 08:34 PM
link
Lol this morning on our town radio they announced a list of products we can buy to strengthen the Canadian economy during this situation.
The CDN dollar is like .77 cents here right now.
So they were saying to not buy Heinz products anymore and a bunch of other crap.

originally posted by: openyourmind1262
Sounds like they ran out of cannabis and maple syrup. Or maybe it's the FACT the Washington Capitals won the Stanley Cup......ohhhh that's gotta sting.

Not at all, there 8 Canadians and 8 Americans players on the team.

I am glad they won. Vegas never paid their proper dues that new team needs to pay, before they win a championship.


I agree, but what can happen is people can get fed up with trumps rhetoric and simply choose to boycott American goods... Who wins if that happens?


Piss off Russia, China, Iran, North Korea! Piss off Europe, the British, the Vikings, the Mongols!


Canadians live in sub-zero temperatures all year long. They eat whale and seal blubber and say, "Aboot" for some strange reason.


They can survive without food, water, shelter by simply lowering their body temperatures!

originally posted by: buckwhizzle
Be wary of a man with fake eyebrows.....

no problem . stay out of my country and I will stay out of yours . Also would you stop sending your garbage to the U.S. keep your damn garbage in your own country .

But they won because of the Russians on the team.....oh the irony. To be honest, Caps won because Fleury was an Eastern Conference goalie his entire career, except this year. Caps played against him at least 6 times a season his entire career. Caps took out Pitt, then easily took out Fleury, they had a book on him so to speak. It's why Fleury played great against Western conference teams this season, Western teams didn't have a book on how to score against him. Vegas want even make the playoffs next season.
edit on 13-6-2018 by openyourmind1262 because: (no reason given)


Piss off Russia, China, Iran, North Korea! Piss off Europe, the British, the Vikings, the Mongols!


Canadians live in sub-zero temperatures all year long. They eat whale and seal blubber and say, "Aboot" for some strange reason.


They can survive without food, water, shelter by simply lowering their body temperatures!

Yeah, but everyone on our border with Canada does the same thing without the seal blubber, eating whales and saying aboot.

Let us know when they get past Detriot.

Well, Milk is actually a nasty thing for the human body to ingest. May as well drink vegetable oil and table sugar.