Libertarians have long been against tariffs and any other economic hurdle to doing business. And both free trade and the free market are all about reducing legal hurdles and obstacles to doing business globally.


The free market is an economic system based on supply and demand with little or no government control.


Free trade is a policy to eliminate discrimination against imports and exports. Buyers and sellers from different economies may voluntarily trade without a government applying tariffs, quotas, subsidies or prohibitions on goods and services. Free trade is the opposite of trade protectionism or economic isolationism.

But as you can see, people create their own definitions for these terms and then rationalize whatever trump does so they can claim that it still fits.

RE: Trump's tariffs should be an affront to anybody claiming to support the freemarket

This is easy: Unless you're not an internationalist / globalist.

edit on 1-6-2018 by IgnoranceIsntBlisss because: (no reason given)

So you support income inequality, environmental damage and lowering the work conditions of people in third world countries.

Says the person who currently supports a president and party who's policies have been responsible for the record inequality we face today. Tricke-Down Economics. Or the same party and president seeking to make deep cuts to the Environmental Protection Agency.... putting somebody in charge of the EPA who has a long track record of opposing environmental efforts.

Me thinks you're projecting.

I'm not on this forum to be a tutor.

And I certainly hope it stays that way.


Libertarians have long been against tariffs and any other economic hurdle to doing business. And both free trade and the free market are all about reducing legal hurdles and obstacles to doing business globally.

What's a people to do when their trading "partners" have quazi / de facto / overt tariffs active against them?

originally posted by: olaru12
a reply to: Ahabstar


Maybe we should just push those retirees over the cliff for the good of the global economy?


Corporations don't have any qualms about bailing on retirees pensions.

It's how the stock holders can afford a 2nd home in the Hamptons and a condo in Vail.


Not just corporations, there are public sectors doing the same.
reason.com...

If I was one of those workers, I'd be tracking down some union chiefs to ask exactly why in the hell workers paid so much money out to the union over their working years. Seems like maybe, just maybe, those unions sold the workers a bill of goods what with all the millions of union dollars that went to political actions instead of going towards actual retirement and worker benefit funds.

originally posted by: Southern Guardian
a reply to: burdman30ott6

I support the global economy, yes.

Have fun with that, Sisyphus. The rest of us will enjoy our strong national economy. America first, ya?

But even ones that wish to pay, can’t compete when their product is x% higher than the imported one. Company goes under (or outsources labor pool). Pensioner’s dollars would go farther without an income tax responsibility as well.

Tariffs keep sounding better and better. You get just as drunk off of Californian wine as French wine. Want that BMW, pay the luxury tax for the import tariff unless made here. Pretty simple. Farmers will just have to grow something other than soybeans for export. Maybe orchards so my peaches aren’t coming from Argentina and the whole planet don’t suffocate from rainforest deforestation.
edit on 1-6-2018 by Ahabstar because: (no reason given)

Look up my history on these boards. I was reformed from globalism long before Trump.

The only ones the orange one is 'flipping' is the unhinged left who seem to have come fully into the neocon fold.


How do US aluminum producers, who stand to win big from the tariff, feel about the president’s move?
Thanks, but no thanks.

In a letter to Trump today (March 6), a group of 114 producers and other companies said they are “deeply concerned” about how a tariff could affect their industry, reports CNBC. They said they believe the tariff will ultimately do more harm than good—especially for US jobs. Among the members are Alcoa, Vulcan, and Rio Tinto Alcan, which together have a US workforce of more than 700,000.

Heidi Brock, president and CEO of the Aluminum Association, shares a common goal with Trump: a thriving US aluminum industry. She’s worried his proposal lets the real culprit off the hook—China.

posted on Jun, 1 2018 @ 07:46 PM
link
a reply to: Willtell
Hmm, they seem to be simply calling for a higher tariff on Chinese aluminum, not calling for no tariffs on aluminum imports. Try again, Willtell.

So you support income inequality, environmental damage and lowering the work conditions of people in third world countries.

Conservatives support all that plus lowering the working and living conditions of working people in our own country.

I'n not against tarrifs, but Trump is insane with his haphazard flip-flopping on tarrifs and making them high enough to really upset the rest of the world.

Actor and former California Gov. Arnold Schwarzenegger (R) on Friday mocked reports that President Trump is considering a plan to prolong the use of struggling coal and nuclear plants, saying he eagerly awaits the administration's regulations to protect pagers, fax machines and Blockbuster.

Who gives a snip what Arnold thinks ?

The dude's spent a snip load of on gas guzzling vehicles(hummers) that's no longer made in America.

Then spent a snip load more $$ to convert one to electric.

How bout Trump haters, and morons like Arnold read the GD constitution.

A tariff more or less is a TAX, and completely within the power of the state.

originally posted by: CB328
I'n not against tarrifs, but Trump

The vast majority of economic experts say this is unwise.

The vast majority of economic experts say this is unwise.

The same ones who celebrated Trump's tax cuts, which was then taken to assume Trump was screwing over the little guy by y'all? Hmmm. 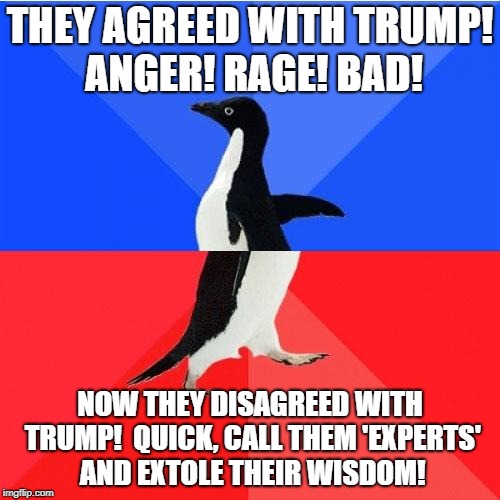 posted on Jun, 1 2018 @ 08:09 PM
link
What Trump does by doing stupid in trying to solve a legitimate issue is forever besmirch the issue.

Maybe the planned intent of this guy


Like the Buddhists say, Skillful means must be applied to difficult problems

You cannot push a move to other sources until they are mature enough to get to the market, and be profitable for the companies developing them.

Solar is not ready for mainstream, although it has its uses and applications.

Although most taxpayers do not have a problem subsidizing research, they do take issue supporting companies who's CEOs are making insane amounts of money,.promising it'll be viable soon. While continuing to soak the taxpayers.

The United States has an unmatched wealth of natural resources. We have enough to support our own country.

Anything we import is a luxury; either convenience or a want. Importing anything cost wealth.

Why would we as a country export our wealth for frivolous luxury. It makes no sense.

If anyone doesn't realize our prosperity and generosity has been taken advantage of by foreign countries and hungry CEOs, perhaps a little research would be in order.

That being said,natural gas replacing coal just makes sense, it's cleaner, cheaper, and produces just as well. Once that becomes cost effective it will be phased in.

Unless politics dictate a different course.
edit on 6 1 2018 by Lykan because: Clarification

originally posted by: Willtell
What Trump does by doing stupid in trying to solve a legitimate issue is forever besmirch the issue.

I've read this 5 times and have no idea what you're trying to say. Is 'doing' supposed to be 'being?" Is there a word missing after 'doing?' Were commas considered at any time during the composition? I see words, thrown hilly nilly into a line and then posted, Willtell. Will you tell us what the hell you mean?

Natural gas is good. Hemp seed oil is better. Virtually replaces petroleum at all levels and is renewable and wealth building for the growers. The refinement process is a seed press and filter the seed kernel bits. Pour straight into a Diesel engine. Plastics, paints, varnishes, etc by some refining. The fiber of the plant is of course paper and textiles.

What I’m saying is this.

If you try to solve a problem by mucking up the works, not seriously trying to study it and solve it wisely, you may be forever making people think it's unsolvable therefore we’ll never try to solve it again.


Years from now people will say.
Oh, Trump tried that and it didn't work so its a waste of time.

Maybe he or THEY don't want it to work