The local cops have problems in this too, they normally defer up, so are they going to put themselves in the line of fire AFTER all that has been revealed as been put out there. Closing the area would lead to the worst publicity possible. Since most top LEO folks are cya folks, who's gonna want this?

Since it is more archeological then active most agencies can hide. Had this happened three months ago it gets buried, literally, under concrete. But there are enough Qsters and momentum to produce what we have now.

Well, it seems they may be getting some cooperation from local PD. Cats out of the bag and going against them wont help the already bad PR for waiting as it has been 5 days. There are citizens with gloves recovering evidence and some is already on the way to VOP base with citizen escort. It includes blueprints they found for additional underground tunnels and rooms. They are apparently afraid evidence will be destroyed.

Three local businesses are supporting them because they see all the traffic. A representative for Cemex ordered them off the land. What does that tell you? They have a 30 year lease on abandoned property. Probably an open secret for PD and BP in the area.

Hopefully other Cemex sites will be investigated if they are not already covering up. The company is thick along the Mexico /US lower border.

Interesting tidbit in this story:

Cemex Corporation, an international cement company that builds tunnels all over the world, is linked to the Clinton Foundation through a UN organization, according to a trade organization: "Amid General Assembly of the United Nations meetings in New York City, Cemex officials signed an agreement to join the UN Foundation Global Alliance for Clean Cookstoves...Launched in 2010 by then-Secretary of State Hillary Clinton, the Alliance eyes adoption of clean cookstoves and fuels in 100 million households globally by 2020."

Also, CEMEX has kicked VoP off the property through the police.

And Jeff sessions just announced the appointment of 300 additional us attorney's.

Reminds me of that image of the pistol Q posted yesterday. Boom boom boom.
edit on 6/4/2018 by carewemust because: (no reason given)

originally posted by: carewemust
Also, add the Starbucks executive chairman to the list of executive resignations.

Now where have we heard about Ariel Investments?

Schultz currently owns 37.8 million shares of Starbucks, worth about $2.17 billion.

Howard Schultz to step down as Starbucks executive chairman
Sounds like he is still going to be around. The article says he may be eyeing a political future.

Oh, I know we have because I remember digging into it, but now I can't recall exactly how it ties in.

Could you imagine the him as president? Oh, someone in the country was deemed racist, so we must all stay home and have a national day of racial castigation ...
edit on 4-6-2018 by ketsuko because: (no reason given)

posted on Jun, 4 2018 @ 05:05 PM
link
Interesting release by the NSA on internal posters for reminding people about speaking outside of the NSA: NSA Security Posters

I found it interesting RE: the conversation a few pages back about ETS. Seems the NSA have indeed changed their beliefs, or so it would seem.

One poster stuck out to me among the 130odd posters devoted to reminding employees to keep their mouths shut. Found on page 31 of above link. Just seemed an odd to me given the NSA/White hate connection seen here.

What a great document you hooked us up with. Thanks! And yes, the one you mentioned does seem a bit odd.
What do you think it means?

posted on Jun, 4 2018 @ 05:43 PM
link
a reply to: crankyoldman
LOL check the poster at page 40! Security lock pacifiers. Very creative, and disturbing at the same time.

What a great document you hooked us up with. Thanks! And yes, the one you mentioned does seem a bit odd.
What do you think it means?

Not sure, of course context is everything. Could be ironic, could be serious: only those of the time can judge to be fair.

It just struck me as so anti Q movement, with Q glasses on the hat flipping NSA is remarkable indeed.

Now, reference the court document on the NSA's mind reading and control (part 2 here) from the 40's the posters were probably pointless in the end.

posted on Jun, 4 2018 @ 06:24 PM
link
President of Nickelodeon also stepped down today. CEO of BET resigned a few days ago as well.

I think the Nick one is all according to plan with the eventual Schneider reveal. Zarghami was president since 2006 and with the company since 1985.

posted on Jun, 4 2018 @ 06:25 PM
link
The Senate Committee on the Judiciary hearing is scheduled for June 11th at 2 pm EST. According to ETS it will be live streamed. 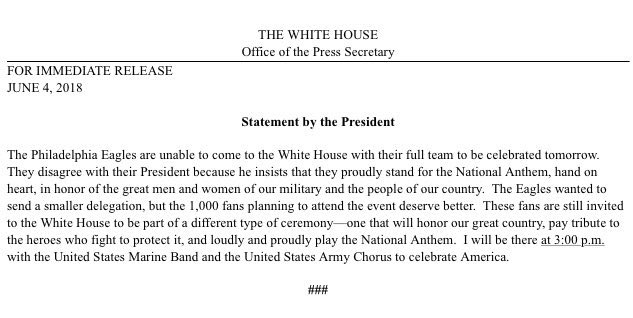 I think your original suggestion looks dead on cranky. FOIA request in February of 2016? by a group called government attic. Timing definitely seems like no accident.

Speak of me, and I will appear.


EW, good to have you here.

You realize you're stuck here now and can't leave? When I speak a name and you answer that's it.

Hah! Be careful what you wish for. I might just stick around.