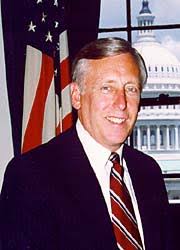 A Democrat, he was first elected in a special election on 19 May 1981 and served as the House Majority Leader from 2007 to 2011.[1][2] He had previously served as House Minority Whip from 2003 to 2007, and was reelected to that post in 2011. These positions make him the second-ranking figure in the House Democratic Leadership hierarchy. As of December 5, 2017 he is the most senior Democrat serving in the House of Representatives following the resignation of John Conyers.

Old Steny decides to get involved in Colorado's Congressional race to back one Democrat named Jason Crow. Who is Jason Crow, in short he's a corporate lawyer and that's all we really need to know but if you want more info on him just Google the man. One of Jason's opponents is Levi Tilleman, a progressive running as a Democrat. The Democrats hope to knock out a Republican incumbent, Mike Coffman but only if they get to put who the person they want in not caring who the voters would want.

So Old Steny had a conversation with Levi Tilleman but didn't know he was being secretly recorded and in this recording we discover that the Democrats already decided who they want to run, ahead of giving the voters any say, and fully admit this to Levi while trying to pressure him out!

This is why I have no love at all for the Democrats because they're nothing but corportist shills who only work for their wealthy donors and don't give a god damn about the voters, especially the working people they're supposed to be championing for! The only people they champion for are the one percent. This small Colorado election is very reminiscent of the Democratic Primaries, Clinton v Sanders, where the DNC fully supported Clinton and did everything in their power to see her pushed through the General election while leaving Bernie in the dust.

In this day and age of instant reporting, secret recordings, and straight up hacking, we have never been able to be so fully aware of what's going on behind the scenes as we are today and if the old dinosaur Democrats continue down this path they will find they no longer have a party that anyone supports, or better yet, they'll find themselves voted out for someone who actually gives a damn about the voters!

Not much to add.

Combing over this info now.

Pulling another bernie is not going to go over well with the dems that I know.

My belief is one of the reasons trump won was because of how the dnc screwed bernie over causing the bernie bros and a few dems to switch sides.


Thank goodness for open mics am I right.

At what time is the audio heard so we don't have to listen to all 11 mins?

They pulled a Bernie on a massive scale and still got away with it but it's the smaller elections that is not at all focused by the national media, even if they weren't obsessed with all things Trump they still wouldn't cover it. But we have the internet and independent outlets covering these important stories so over time this game of theirs will no longer continue to work.

wow, after hearing that it is my opinion that Levi Tilleman will win.

But always in the interests of fairness I must remind everyone that this is not a problem that is only suffered by the dems.

They were just the ones that got caught this time.

Come to the center, brothers and sisters.
It's much more honest here.

Trump won so I wouldn't say they got away with it.

posted on May, 1 2018 @ 05:44 PM
link
This is why I keep trying to explain to both mainstream dems and conservatives that the dem establishment is NOT "leftist." They sometimes say a few left talking points, but they are really just war mongering, economic neo liberals just like the Republicans. a reply to: Swills

I am getting more angry about this by the min.
I wish I lived in colorado so I could use my vote.

I have friends that live there that are super libs. I will be sending this information along to them.

The commissars of DNC power wanted to keep the poor little socialist from Vermont down. So they knowingly scuttled 4 years of control over the executive branch to prove a point.

originally posted by: scraedtosleep
a reply to: Swills

wow, after hearing that it is my opinion that Levi Tilleman will win.

But always in the interests of fairness I must remind everyone that this is not a problem that is only suffered by the dems.

They were just the ones that got caught this time.

Come to the center, brothers and sisters.
It's much more honest here.

I know nothing about this please post more information.

I know nothing about this please post more information.

He's a corporatist RINO richboy that's using his office of Governor to squash any actual conservative running as Republicans in the state. Even going after our only elected Libertarian. He's broken a few campaign rules and blamed others of doing the same when called out. He's an establishment plant that is utilizing his office in ways very similar to what Obama did. Except he's going after REAL conservatives, not even fighting the Dems.

Too be fair, he'll lose his power if real conservatives take too many seats, and the Dems don't have a lot of sway here since we have a bicameral congress/senate.

Hell, his brother Joe is worth about 1billion USD. And he uses it and his office as a meat clever to any opposition.

Color me surprised, but isn’t this business as usual? I mean truly par for the course in American Politics! And is it just me or does the callous, condescending, and aloof tone of Hoyer totally seem just “absolutely” a perfect fit for someone representing everything but American voters’ interests? What a chode.

Just so you realize this from another perspective, the reason Hillary is still brought up by the right, is the Clinton are part of "them", and still seem to have control over the DNC. The one's who make the decisions behind the scenes are the enemy here, and they are so corrupt, they do this out in the open now. It's wrong, and needs to change.


Two points...the first is that Hillary Clinton ran as Hillary Clinton...not as Mrs. Anybody, and she should be recognised as having lost the election as such.
Secondly, if the Dems learned nothing from that debacle, then they will lose again in 2018, and in 2020. As much as they want to play the card...just not being Trump ain't enough.


This is why I have no love at all for the Democrats because they're nothing but corportist shills who only work for their wealthy donors and don't give a god damn about the voters, especially the working people they're supposed to be championing for!

Yep both party play for the same corportist team . Interesting that the typical demo supporters are not participating in this thread.