So How Bout That Correspondent's Dinner?

If there had been any I'm sure the libs would have already defaced and/or broken them. That's one of their favorite pastimes.

We have to find something to do when you lot are out burning crosses and running over protesters.

"You lot?" Are you calling me a racist/nazi? Is that how you want to play this game?

Lipstick on a pig.

The only way the Democrat Party's penchant for enslaving people of color has changed between the 1860's and the 1960's...is that their plantations are now political rather than agricultural.

posted on Apr, 29 2018 @ 03:29 PM
link
I am no big fan of the correspondents dinner, I watched the clip on the Drudge Report showing some chic I never have seen before I guess, try to be funny with crude humor. That was about it if I was a President, I dunno if I would want to deal with that weird crap, I can’t think of any other country that attempts to roast the prez. With crude humor. I dunno no matter what Trump, does the media, will always love to hate him. “Misery is love’s company indeed.”

Though I don't think sarah deserves the hate she gets comedy is comedy.

Comedians should be allowed to tell whatever joke they want and face the consequence of no one laughing.


I didn't watch the dinner but if they had carrot top I am sure it was terrible. That guy has never been funny in my opinion but I would never want a law made to stop him from telling his jokes.

As if the Democrats of today are the same party from back then. Are you not aware of a thing called the Southern Strategy?


In American politics, the Southern strategy was a Republican Party electoral strategy to increase political support among white voters in the South by appealing to racism against African Americans.[1][2][3] As the civil rights movement and dismantling of Jim Crow laws in the 1950s and 1960s visibly deepened existing racial tensions in much of the Southern United States, Republican politicians such as presidential candidate Richard Nixon and Senator Barry Goldwater developed strategies that successfully contributed to the political realignment of many white, conservative voters in the South that had traditionally supported the Democratic Party to the Republican Party.[4] It also helped push the Republican Party much more to the right.[4]


It was called "the southern strategy," started under Richard M. Nixon in 1968, and described Republican efforts to use race as a wedge issue -- on matters such as desegregation and busing -- to appeal to white southern voters.

Ken Mehlman, the Republican National Committee chairman, this morning will tell the NAACP national convention in Milwaukee that it was "wrong."

"By the '70s and into the '80s and '90s, the Democratic Party solidified its gains in the African American community, and we Republicans did not effectively reach out," Mehlman says in his prepared text. "Some Republicans gave up on winning the African American vote, looking the other way or trying to benefit politically from racial polarization. I am here today as the Republican chairman to tell you we were wrong."

And guess who was and still is a hardcore Nixon fan? Trump's buddy, Roger Stone. 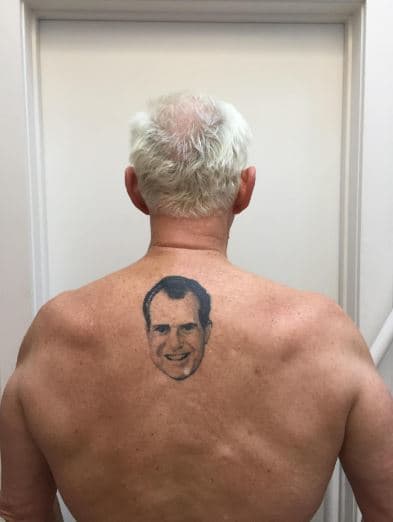 But yeah, today's Democrats are the party of suppressing the black community and the Republicans are their saviors.......
edit on 29-4-2018 by Swills because: (no reason given)

posted on Apr, 29 2018 @ 03:50 PM
link
SHS deserves a whole lot more than this for her part in this abomination. If a few jokes is all that she gets, then there is no hell awaiting her (which there doesn't seem to be any evidence for... luckily for her).

you going to back that up with a link to the court case?


We were in Tennessee. During the motorcade, he spotted some ugly racial epithets scrawled on signs. Late that night in the hotel, when the local dignitaries had finished the last bottles of bourbon and branch water and departed, he started talking about those signs. “I’ll tell you what’s at the bottom of it,” he said. “If you can convince the lowest white man he’s better than the best colored man, he won’t notice you’re picking his pocket. Hell, give him somebody to look down on, and he’ll empty his pockets for you.”

So a racist Democrat from Texas, who signed the Civil Rights Act of 1964 overcoming his own prejudices, before the Southern Strategy said something racist and you think you just earned yourself a mic drop? LBJ left politics just before his party became Republicans. You really don't know about the Southern Strategy or are you just being willfully ignorant to make you political hyperbole points?

His party switched sides during the last years of his presidency and his signing of the Civil Rights Act of 1964 was a catalyst for it!

I enjoy pointing out why I think they weren’t good

But for god sakes, everyone needs to stop clutching their pearls and being offended

So what if she was offensive? I don’t care in the least bit

Only one thing matters in comedy to me

Was she funny? I don’t think so

If someone thinks she was, great I am glad you enjoyed it!


What? Yeah, you can't drop a comment like that without providing a source and I've been trying to google it but keep coming up empty handed.


originally posted by: carewemust
a reply to: gortex


you going to back that up with a link to the court case?

Considering slavery was about depriving liberty from people, it was not a conservative position.

That's not what "conservative" means.

1. a person who is averse to change and holds to traditional values and attitudes, typically in relation to politics.

It was about forcing one person's decision on another through force of law, so that sounds progressive/modern liberal.

See, what happens is that you're confused by "conservative" rhetoric (I put conservative in quotes often because most "conservatives" are deluded about what conservatism actually is). Like how they hide # behind "religious freedoms" such as denying marriage licenses to same sex couples.

The actual arguments are secondary, after the fact and irrelevant. There were people who believed strongly in their arguments against women's suffrage, against ending segregation, etc. Preservation of slavery was most definitely a conservative position.

It was about forcing one person's decision on another through force of law, so that sounds progressive/modern liberal.

I can't account for your mistaken beliefs. Don't get me wrong, there are certainly Democrats who aren't liberal or aren't sufficiently liberal but on the whole, conservative positions tend to be anti-liberalism with a few exceptions like firearms.

Jim Crow was all about government telling a private business how to run its operations. That sounds progressive/modern liberal too.

No. Jim Crow laws were all about white Southerns with all the political power oppressing black people. What kind of twisted worldview would cause you to ignore *that* most important of facts?

The Civil Rights Act was just the same, telling a private business how to operate instead of letting the free market handle the repercussions of those private decisions. Goldwater was consistent on opposing *that one aspect* of the Act.

Actually, Goldwater's argument against the Civil Rights Act of 1964 was based on States' Rights just like many Southern politicians argument about ending slavery. Like "religious freedoms" it's basically a hollow justification thinly masking reality.

Ah, the 'Southern Strategy' that wasn't. It took an entire generation of Democrats shuffling off the mortal coil before non-racist Republicans could vote out the 16 racist Democrats that filibustered the Act and/or promoted segregation in southern schools... ah memories.

You're back to confusing "Republican" and "Democrat" with conservative and liberal (or progressive). We don't see it as much these days but parties used to have pronounced divisions, they had "wings" that were strongly correlated to regional attitudes.

The Southern Strategy that wasn't? Goldwater swept the formerly "Solid South" and that was about it and he was the first Republican presidential candidate to carry most of those states since Reconstruction. Now it's an all but given that the Republicans will win the Southern states. That was a major turning point in American politics and it had nothing to do with the nonsense you're talking.

The Democrat party is no different than before, it still wants to control people through force of law. It's modified its approach, is all.

The Democratic Party is definitely different than the pre-Civil Rights Era DP. Between Reconstruction and basically 1964 (and shortly thereafter), the South was utterly dominated by Democrats at all levels of government. Now the reverse is true. Neither party is the same as it was and they never are because they evolve over time just like society and everything else. (I apologize if you don't believe things evolve, I know that's a conservative view).

To be fair, the Republicans are the ones who have been letting the progressive cancer convince them that politicians should decide how people live their lives.

Very true. The problem here is bad comedy, people who like to pretend to be offended, and everyone pretending to be above the fray.

Let's stop pretending folks. Everyone likes the occasional dirty off-colored joke, everyone likes the naughty gossip, and everyone wants to speak their minds. None of that's ever going to be OK as long as we keep catering to these easily offended people who when behind close doors are just as bad as everyone else.


originally posted by: carewemust
a reply to: gortex


you going to back that up with a link to the court case?


LOL! Just when you think a member can't sink any lower, carewemust slandering a comic with bestiality allegations just for daring to roast Dear Leader. Making yourself look quite desperate and pathetic.

"You lot?" Are you calling me a racist/nazi? Is that how you want to play this game?

Oh I see, it's okay for you to make blanket statements but nobody else can:

If there had been any I'm sure the libs would have already defaced and/or broken them. That's one of their favorite pastimes.

Now you're hypocritically "offended" by getting an in kind response? Gosh, I just don't care.