I am saying 911 was the hardest , most expensive and riskiest way to achieve that goal..

Money is not real.. it is not based on gold or silver.. they just print it up out of thin air..

That means they don’t have to steal it. They can just create more.

Hell most money is digital now.. meaning someone could likely hack the right server and make however much money they want with a couple mouse clicks..

With the few BILLION DOLLARS required to orcastrate 911 couldn’t you build your own money printer??

It is the government your saying is responsible. The people who already own and possess the money printers and servers who control all the money in the first place..


So they’ve don’t need to build a printer..

They don’t need to hack a server..


They already own both.

No one is saying there was no explosions at the WTC. Fires will make large backup battery systems explode. Fire extinguisher exploded. Vending and building AC unit compressors explode. Anything that has a trapped volume of gas or liquid has the possibility of exploding during a fire. True or false.

What you need to do from the video and audio evidence is provide evidence of detonations with the energy to cut steel columns. Pick a video of the WTC, link to it, and then state the time the detonation occurred relative to the video’s running time.

It should take one post in about ten sentences to make a case for an explosion with the power to cut steel columns at the WTC.

Not posting post after post referencing common fire explosions out of context accompanied with the misrepresentation of secondary evidence.
edit on 2-5-2018 by neutronflux because: Added and fixed

You mean a government with no respect for human life and personal property just confiscate everything? Which has occurred repeatedly through human history? With nothing more than the premise of redistribution of wealth?


originally posted by: Fermy
Excellent work there LaBTop, it's gone very quiet all of a sudden. No usual suspects. How telling.


originally posted by: mrthumpy
The problem is that when LaBTop is including another steel frame that collapsed from fire and claiming only one did and claiming that a building with at least a ten story gash down one face had only a small corner hole in it then it's clear that this thread is just another poorly researched waste of time Like wealth distribution is usually the motivation rather than the king just wanting your stuff, but exactly lol..


We know what governments who kill those who speak out against the establishment look like.. history is full of them..


Guess what none of those has wasted much time on???


Hiding it behind some convoluted conspiracy..

The conspiracy usually comes in the form of demonizing those you want to rob or murder..

When it comes it the actual act they just disappear.

A) Just yesterday another steel frame high rise collapsed from fire.. and looked remarkably like a controlled demolition. It was on the news last night..

B) how many of those other buildings were hit by a plane full of jet fuel???


The same one that collapsed.

Watch the MIT documentary. They explain the math behind it all quite well.

With a new one in Brazil. Sao Paulo Brazil building collapse.

With a new one in Brazil. Sao Paulo Brazil building collapse.

Indeed. Wonder if AE911 are going to be foreced to claim it was a controlled demolition like they did with Tehran

B) how many of those other buildings were hit by a plane full of jet fuel???

None of the buildings in LabTop's meme were hit by a plane.

The original, NIST-Report photo of the WTC-7 southwest corner damage, starting at floor 18 downward, still masked by thin smoke streams, giving the impression of a much deeper and lower going gash :
www.wtc7.net... 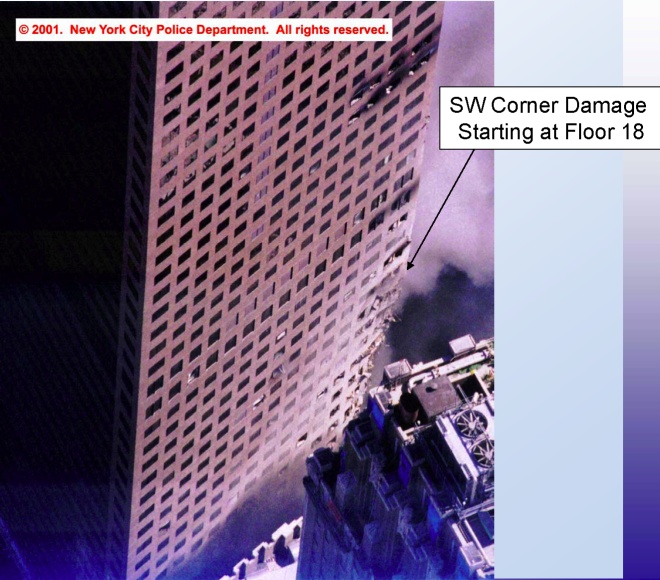 These are the ten, FOIA freed from NIST, helicopter photos of the WTC-7 area damage after WTC-1N collapsed :
s3.amazonaws.com...

The first of the last three high resolution photos shows the real damage to the western corner of WTC-7 after the WTC-1N tower collapse, nearly no smoke overlay :
s3.amazonaws.com...=8 The next photo shows a thin smoke column laying over the lower part of the corner gash, making it seem as if its going far lower. It's by the way obvious that such localized damage could not bring that huge 47 story high building down. NIST used this one :
s3.amazonaws.com...=9 And the last helicopter photo shows the small damage to the top of that western corner :
s3.amazonaws.com...=10 The reader should read this thread by me too :
""FDNY Chiefs KNEW WTC 2, 1 and 7 would FAIL"" :
www.abovetopsecret.com...

It's full of, probably not known yet to fresh 9/11 researchers, small and bigger facts, links, videos and photos.

Then realize that there are plenty of witness and media reporters statements that there were multiple explosions inside WTC-7 all day long. Indicating a slow demolition sequence.
And a seismic recording by LDEO that shows three rather big explosions already between 10:30 and 12:00 A.M. (which LDEO called further collapses, which were not heard by anyone at the ground zero debris pile). The second one at 11:15 A.M. is f.ex. by far heavier than the recordings of the two plane impacts....! There is no same sized seismogram published of the times after 11:40 A.M. by LDEO, where we could see any further such spikes on their seismograms, up to the collapse of WTC-7 at 17:21 P.M.. Which is in fact quite illogical, since they must possess those, of course.

Omg building 7 was hit by half a building. Lol


Like half the building was destroyed by falling chunks of skyscrapers. We are just looking at the side that didn’t gwt hit when it collapses.

Can you state which waves are present in your cited seismic evidence that shows it was activity from a charge setting off? Are there certain types of waves generated by detonations that are not present in the WTC data?

Below is a link that explains the WTC seismic data, and the medium the waves traveled through. With comparisons of know explosions compared to the multiple building WTC collapses.


Again, it is expected that a building fire would have resultant explosions from large battery backup systems, AC compressors, and any sealed item holding pressure. Is that a false statement.

Is it true the resistance of every one of the 47 floors of the WTC 7 had to be removed to achieve the witnesses collapse rate?

What evidence is there of an explosion setting of the final collapse of WTC 7? Or was explosives not needed?

Why can you not reference any video and audio to show proof of a detonations powerful enough to cut steel columns?

Explosions that you think where picked up 21 miles away at LDEO? With a large body of water between? A body of water some seismic waves cannot travel through, and may generate seismic noise.

Yet those explosions are not picked up on any known video? They did not eject any shrapnel? Did they blow out remaining windows in WTC 7? Even set off a car alarm?

posted on May, 2 2018 @ 06:10 PM
link
Debunking of seismic evidence of detonations powerful enough to cut steel at the WTC.

Read, and decide for yourself?

The asbestos abatement plan for the WTC complex, was estimated to take around ten years and cost a total of $200 million dollars. Each year of the lease, Silverstein had to pay $120 million in rent. In other words, each year the asbestos removal cost was going to be 1/6 of the amount he paid in rent. In other words, knocking down the Towers to save the asbestos abatement costs would be idiotic. Especially since Silverstein still had to make the $120 million a year payments....even when there were no buildings for him to collect rent on.

And yeah, it is not a secret that a lot of people believe that had the WTC had the old fashioned asbestos fireproofing, they would not have collapsed. Hell, during the construction of the towers in the 70s, people were saying a fire above the 60th floor would bring the building down.

Omg building 7 was hit by half a building. Lol


Like half the building was destroyed by falling chunks of skyscrapers. We are just looking at the side that didn’t gwt hit when it collapses.

Yes I know it was. WTC1 caused a fair bit of damage to 7 when it collapsed

A) it did fall due to the fire, so obviously it could lol..

B) you are not following the evidence to the logical conclusion..

You are taking a gap in the evidence and filling it with whatever you want..

For example: if we say the building was full of asbestos. Is “the government did it” the most probable logical conclusion from that point??

Hell no.. there is a mile of distance between the two.

Or for an example you might not be emotionally invested in, take the moon landing....

Say we verify 100% that some of the pictures are fakes. Is that “they faked it all” the logical conclusion??

Well no.. maybe the photos were ruined by radiation , but they still wanted to release something..

Maybe whatever press agent released them screwed up..

Maybe he intentionally added one because it looked cool and “fit”.


There is a mile of space between one and the other..


Because last time I checked W was president for 911 lol..

Last night I watched a video of the C-130 crash in Savanna.

A bit ago I watched a video of the crash site, posted on ATS by Zaphod58.

The video on the news showed the plane headed straight down toward its crash site. This was " reportedly" the same way in which Flight 93 went down on 9/11.

There is a distinct difference in the appearance of the two crash sites from planes going down in very similar circumstances.

This draws into question, just how much credibility can we give to each of these "reported" events ??