I'd be only guessing about what made the hole, no point speculating. The landing gear was found though inside the Pentagon I know that.

Since flight 77 crashed in to a building the size of 20 football fields, the jet crashed through three rings, and no wreckage made it past B ring? Yes, all three sets of landing gear were found in the inner part of the pentagon. Can you cite the location where the front, mid fuselage left, and mid fuselage right landing gear ended up?

You seem a bit confused over these bearings or perhaps it's the way you're stating the point you're trying to make that's confusing your readers. Yes the plane's compass bearing recorded in the DFDR is referred to magnetic north which, for that location and time, is about 11 degrees anti-clockwise from true geographic north so the plane came, roughly speaking, from the SW and was headed NE for both scenarios (official and alternatives) because it impacted the western side of the building.

Compass bearings are expressed in degrees from north incrementing in a clockwise direction. Sometimes the western side of the compass is expressed in negative degrees anticlockwise from north but it's essential to know which north, magnetic or geographic/true north, is being used.

originally posted by: Jesushere
I just provided audio evidence Goper 6, saw the plane NE bound descending before it crashed. If it was descending after the turn the plane could not be on a SW position for the 5 lightpoles to be knocked over.

Again, how do you calibrate a “magnetic” compass to read something other than magnetic north? Even when digitally interpolated into true north, that correction factor changes from region to region.

And I provided actual Gofer 6 testimony and interviews where there is nothing about NE. Please actually provide the quote you claim exists. You are so wrong on so many points, not wasting my time on something you are not willing to actually quote.

You have what, 12 witnesses for the NE flight path? And a subset of that group claims the impossible fly over narrative? The bulk of the 12 can only can project the fligh path, they were not directly under the jet.

Yes, the jet completed a large turn before lining up in the pentagon. A path witnessed by at lest thirty people directly under the jet? With more from the highway? And near by hotels? Witnesses backed by physical damage? Then what hit the navy annex antenna? The light poles? What clipped the vegetation? What engine clipped the low concrete wall? What damaged and pushed items in the construction yard towards the pentagon? What left a whole around 90 feet wide in the facade of the pentagon? What left scrapes where the wing hit low before the pentagon?

originally posted by: Jesushere
neutronflux 757 plane was using a magnetic compass not a standard compass. It was calibrated for deviation. The compass dials would be showing an SW direction if that's where it was. Instead the compass was showing a NE path on 70 magnetic.

originally posted by: Jesushere
neutronflux Shear studs provide support to stop the floors and girders from buckling from fire damage.

Quote from NIST they forced the model collapse by removing shear studs?

Hot enough does not mean there was no thermal stress? Are you saying the fire was not hot enough to cause vertical columns to lose 60 percent of their strength?

You do understand people from AE think the structural steel was with in an inch of walk off, so somehow that makes collapse impossible? Only a slight change of factors puts WTC 7 into collapse even by AE standards. The fire was hotter than calculated? The fire insulation was more deficient than calculated. There was more building damage than calculated. One bad floor joint? A floor connection with a preexisting flaw. Bolts not torqued quite right?

And again, there are other studies than NIST that show thermal stress and fire related buckling lead to WTC 7 collapse.

And how is AE’s bought WTC 7 Evaluation coming along? When was it released for public comment?

If it was not fire related buckling and thermal stress, then provide proof of explosives? Supposed floor to floor explosives?
edit on 16-5-2018 by neutronflux because: Added and fixed

How is that Gofer six took off from Reagan minutes before flight 77 crashed working out for you? Like to push any other false facts?

If AE has proven walk off and /or thermal stress / fire buckling impossible,
-where is there formal model and study?
-when are these items open to public comment?
-when is the model / study being published for peer review?


Answer, they don’t want to produce anything tangible. They want to milk the conspiracy crowed. It is equated to trying to knock down a house by trying to peel away the wall paper. AE wants to push narratives they can sale to a target audience, not put it on the line for public scrutiny.

posted on May, 16 2018 @ 11:09 AM
link
Pilgrum The plane heading was approximately 60 degrees NE this was it's true North course near Arlington. You can see that on the dials of the compass was fixed on the 60 degrees dial that's why the compass read 70 magnetic.

posted on May, 16 2018 @ 11:22 AM
link
neutronflu The plane direction was in between 0- N to East 90 The plane true course when it descended after it did the u turn was 60 degrees on North East bounding heading

posted on May, 16 2018 @ 11:25 AM
link
neutronflux What I posted the audio of the pilot speaking to the tower did you even bother to listen to what he said? He said the plane was rolled out on NE course just before it crashed?

originally posted by: Jesushere
neutronflux 757 plane was using a magnetic compass not a standard compass. It was calibrated for deviation. The compass dials would be showing an SW direction if that's where it was. Instead the compass was showing a NE path on 70 magnetic.

You still need to explain how you make a magnetic compass read something other than magnetic north for the area it is?

Pilgrum The plane heading was approximately 60 degrees NE this was it's true North course near Arlington. You can see that on the dials of the compass was fixed on the 60 degrees dial that's why the compass read 70 magnetic.

See what Dials? You have footage of flight 77’s cockpit? Or you referring to a simulation who’s flaws were pointed out to you?

What are you even talking about? Is this like you claiming Gofer 6 taking off minutes from Reagan before flight 77 hit the pentagon? Or the quote from Gofer on something about north east you cannot produce as a written/texted record? Not that hard to type the quote out and cite it with a time stamp from your cited YouTube video?

posted on May, 16 2018 @ 11:36 AM
link
Pilgrum Magnetic North is in the direction of Arlington. That means the plane was North, not South.

posted on May, 16 2018 @ 11:43 AM
link
neutronflux You don't know what you're talking about the compass calibrated the Magnetic heading for the plane.

The plane was 60 degrees on NE bound heading. The compass added the 10 degrees going NE you add you don't subtract degrees on that heading that's why the compass magnetic heading was 70 degrees when the plane was NE of the Navy Annex building.

70 degrees is the Magnetic North heading. 60 degrees is true course going NE.
edit on 16-5-2018 by Jesushere because: (no reason given)

How do you make a magnetic compass read something other than true magnetic north? Are you talking about a digital compass? But how does the correction factor work in that the difference between magnetic north true north varies from region to region.


When you calibrate an instrument, it is checked against a standard. Is that false.

Changing a magnetic compass reading to a true direction reading is a correction factor. A magnetic compass cannot do that unless it is tied to some sort of machine or digital equipment. Is that false.

Gofer 6: that, ah traffic for gofer six zero is still in decent now and looks like he rolled out North east bound.

posted on May, 16 2018 @ 12:10 PM
link
neutronflux It based on the grid for Washington DC. Magnetic North is the field up around Greenland and Canada. If you heading North in the Washington area your heading North to Arlington!

True North is just the plane true course at the time it was 60 degrees.

originally posted by: Jesushere
neutronflux It based on the grid for Washington DC. Magnetic North is the field up around Greenland and Canada. If you heading North in the Washington area your heading North to Arlington!

True North is just the plane true course at the time it was 60 degrees.

Then what is this all about

neutronflux 757 plane was using a magnetic compass not a standard compass. It was calibrated for deviation. The compass dials would be showing an SW direction if that's where it was. Instead the compass was showing a NE path on 70 magnetic.

Then where are you getting the 60 from what instrument from what record from the crashed jet?

Please cite how you know what the instruments from crashed flight 77 was reading?

Handy tool for you?

posted on May, 16 2018 @ 03:34 PM
link
neutronflux. The FDR data has the plane at 60-degree position NE. Even the magnetic compass visually shows the plane 60 degrees NE.

On it own, this could be an error but this data is backed up the FAA/ Norad returns animation too they also had the plane flying NE over the Navy Annex.

You have to discount what the pilot of gopher 6 said he witnessed too and him seeing the plane rolled out NE on the descent to the Pentagon. The plane has to be rolled out SW not NE when descending.

You have to ignore multiple eyewitnesses who saw the plane NE of Arlington.

All this collaborates a cover-up.

You seem to be confused on the difference between position and heading. Heading is the direction the aircraft is heading.
Position is the location of the aircraft at a particular point in time.

The final heading of AA77 was 60.25 deg. true north. This agrees with the damage path caused by AA77. 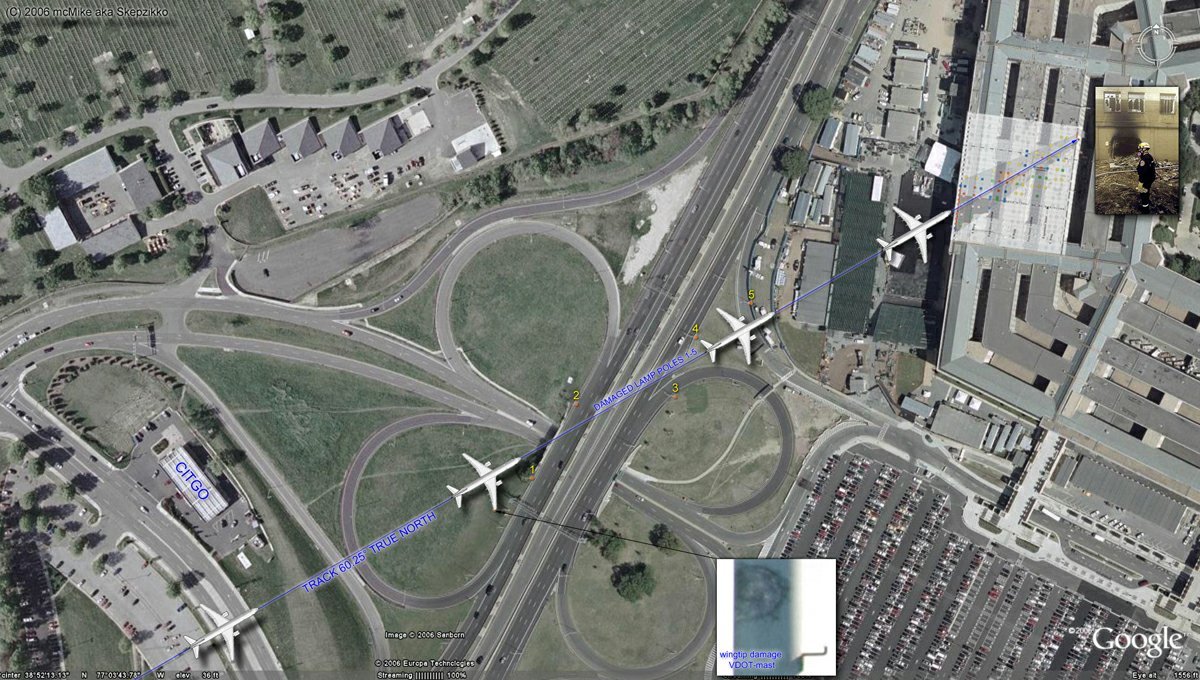 
This photo shows the LONG-LAT-ALT-TIME data points of AA77 recorded on the FDR. 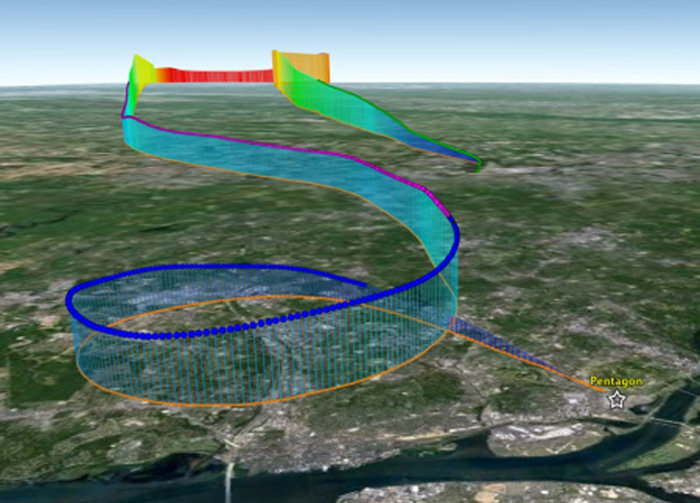