The real puzzle, to me, is how he seems to enjoy negative press to begin with. He'll say outrageous things just to get attention, then back off his outrageous statement later and go significantly softer. Matching his words and his actions is impossible, and that isn't even considering lies. Its just that he says outrageous things, and then acts out of congruence with those statements as part of his 4D Chutes and Ladders tactic or something.

So he doesn't mind negative press....

....but seems to shy away from letting the press portray him negatively.

Tells me that he only wants negative press when he sees value in it. He sees his reputation as capital, and he uses that capital pretty significantly.


Not only is Trump a coward, he's a poopy-head and has a kaka-butt.

Yeah, I threw down.

Coward. A "hit and run" little kid.. Can't face the inevitable.. and this proves it.

originally posted by: Nickn3
Trump may be a lot of things but he's no coward.

You realize you are talking about a man that can't fire anyone in person. He fires via Twitter. Trump is the epitome of cowardness.

Oh and Mueller had a bronze star and purple heart.

Hmm using his race to his benefit you don't say? Let's say an opposition did that, would it not be racist? What if Trump played a celebratory Hitler clip for his German ancestry and his natural nazi-esque disposition we so often here about? That would go over well i' m sure.
edit on 4/8/2018 by TheLead because: (no reason given)

posted on Apr, 8 2018 @ 10:01 AM
link
trump is such a scared little wussie he can't even walk over to a different part of the white house, and fire people face to face like a man, he has to do it with a tweet...no wonder when Putin says "bend over", trump says "how far"

The Man has Class

Who are you trying to fool? Trump has class?

You can say all you want about the media and how they treat him, but to say Trump has class is absolutely absurd. Unless your standards of class came from watching Jersey Shore episodes. 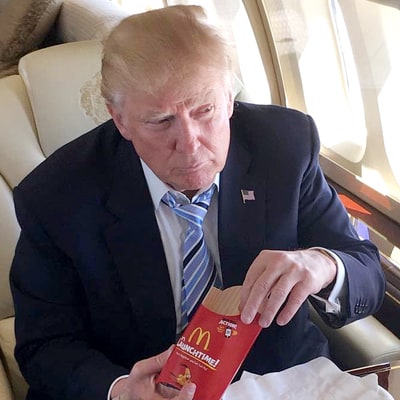 Seriously. Could you have made the OP more flame worthy?

except back then the media was actually decently fair and balanced because america was mostly moderate and the left and right were more amicable and not trying to push extremes, america before obama wasn't anywhere near as extremist in their views as it is now.

what i'm wondering is why do a select group of media people get such special treatment in the first place? what makes their words so special? how does such a thing have any importance? such blatant media corruption is not conducive to free speech, if only some media can go then none should. they should end every single such elitist "dinner" like this and restore proper american integrity and show favor to no one period.

posted on Apr, 8 2018 @ 10:44 AM
link
There is not an American that can say that the legitimate media even exist anymore nor has for many years have they. No matter what side your on they are just trying to tell you what you want hear to inflame you so you spend all friggin day watching. Why would Trump attend a hotbed of idealist that could care less about any American but only there own ideals and ratings?

I turn on fox occasionally in my office and listen to NPR in the car. Both sides are guilty of creating false narratives to in flame listeners

You must suffer from short-term memory loss. If there was a drinking game where every time he s Uhm, well anyway. Take away Obammy's teleprompter and you get this....

posted on Apr, 8 2018 @ 11:39 AM
link
There are a million rationalizations and excuses but only one way to be a man and own up to the truth.

Whether you voted for him or not, no reason for any of you to act less than what you're worth. The man is weak, he's been bubbled his whole life, surrounded by yes men and people who used him.

Someone truly great would have walked into that room and turned it around, owned it - not ran away for two years now.

It would make the fake-news media happy if Trump attended.

Always do the OPPOSITE of what the fake-news media wants.

It takes a real man, made of courage and grit to even ask for a military deferment.........5 times

originally posted by: lakenheath24
a reply to: Sillyolme

You must suffer from short-term memory loss. If there was a drinking game where every time he s Uhm, well anyway. Take away Obammy's teleprompter and you get this....

Careful or you will send the deranged Leftists over the edge with real facts.
She is clueless....Obama a natural public speaker? A real charmer? Relaxed and easy? Jesus H Christ.
That is one of the more delusional things I have seen her post and I have seen some whoppers.
And BTW...Obama has never outclassed anyone....ever.
edit on 8-4-2018 by RazorV66 because: (no reason given)

Can Trump possibly be more chicken? Seriously, he is sending in Huckabee? He can't face the press? Perhaps those bone spurs are acting up.

Let's state the obvious here. Obama was spectacular at these events and Trump doesn't want to be out classed by Obama.


I wouldn't even send Press Secretary to this collection of ghoulish fiends.

originally posted by: Nickn3
Trump may be a lot of things but he's no coward.

originally posted by: TXRabbit
How dare you even question the toughness of our President.

It takes a real man, made of courage and grit to even ask for a military deferment.........5 times

Yea how dare he want to act like the last 2 democrat office holders. lol

Whats the upside for Trump? there is none!

oh, but hes supposed to be a good sport and go be a punching bag for the discredited harpy media?


Id really like to know where this idea comes from that its a noble, laudable thing to essentially be roasted by people who pretend to be unbiased news reporters.

Anyway, how does someone consider themself an unbiased news reporter then turn right around and become a comedian?

Maybe this charade proves that the news media really ISNT news at all to begin with. After all, if you had any credibility and self respect would you risk losing it by using your platform to insult your political leadership? But then expect to be taken perfectly seriously the next day?


No, people who think this is the appropriate use of the news media and their reporters have drunk the Hollywood Kool aid which says its good and even praiseworthy for your unbiased news organizations to double as hack comedians and insult artists.

Oh wait! Thats what they do every day already!


He has the press right where he wants them and right where most americans want them. They are simply sore that POTUS wont give them standing by making an appearance. They need his appearance......because they are weak.