Snowflake Soldiers: Army Officers Going Back To Basics To Instill Discipline On ‘Entitled’

I have no excuse to address you.

posted on Mar, 24 2018 @ 11:30 AM
link
My view as a 24 year veteran with two tours in Vietnam is that the soft underbelly of each generation speaks the loudest. They cry and pout on camera as much as they can. This is in hopes they never have to prove their metal or their true intellect.

I have the fortune to have two brothers-in-law who know more about Vietnam and military affair than I do...so they say! Neither having served one day in the military. They inform me that they would never use "waterboarding" even if their lives or troops lives depended on the outcome. This is the first indication of the arrogance that half of my generation possesses. They refer to the "Ken Burns" documentary as the source of their new found wisdom. They inform me of the misdeeds and mistakes of my service at any provocation. I wonder if they had PTSD after watching that Vietnam documentary.

The truth is that our military is going to do just fine in any future conflict. The soft underbelly has been around in every war. The true enemy of our military is Washington, DC. They micro-manage all aspects of any conflict with ridiculous rule of engagement and bad political considerations. Korea, Vietnam and the first gulf war are prime example.

If want to hear the snowflakes squeal, just start the draft and include women... there would be riots in the streets by every leftist group in existence.

This is just my two cents from an old soldier. 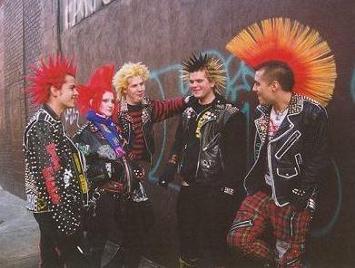 Yet here you are, still addressing me. Not my points, mind you. Just me.

It's almost as if you think if you get the last word in, you'll have won the internet for the day. But being a tough old guy, I'm sure that can't be it. Tough old guys don't need to have the last word.

What about the last beer?

originally posted by: intrepid
40 years ago.

When did these guys ever fit in during the last 3000 years discluding the Mayan era?

I'm sorry what was your point again?


originally posted by: intrepid
40 years ago.

When did these guys ever fit in during the last 3000 years discluding the Mayan era?

Who said anything about fitting in? Just pointing out there are different people in all generations.

Ok. So you quoted the saying in my avatar. Good job. I'm proud of you.

originally posted by: BotheLumberJack
a reply to: Shamrock6

OOPS still freaking me out with your profile pic.

You're freaked out by a picture? Do you need a safe space?

I think it's pretty obvious there is no point, just an endless quest to have the last comment in the conversation to win the internet points.

I wonder how the article writer thinks about the hippies from the 60s?

Make love not war sounds like something a snowflake would say.


originally posted by: Shamrock6
Tough call, as they most likely didn't wear tight pants. At least not often.

Yamamoto Tsunetomo, author of The Hagakure (The Book of the Samurai), also used make up. He could gut you in one strike but he's obviously a fairy according to some people.

Oh here we go!
Yamamoto Tsunetomt is quoted as stating, "gives random instructions on how to behave properly as a homosexual samurai and how to take on a gay relationship with another samurai “the right way.”" whitedragonawa.wordpress.com...
Yeah, I bet he did wear make-up.
What ever.

Ok. So you quoted the saying in my avatar. Good job. I'm proud of you.

My point? You insulted me. I should be asking you that Question.

Safe from your profile yes maybe. In general no.

Do you like using leftist tactics to annoy people, it seems you do.