How ironic. The Right is calling for martial law now that Trump is POTUS but when Obama was in office all you heard from the RIght was Doomporn predictions about Obama declaring Martial Law and taking all THE guns and locking people up in FEMA camps.

Like, how hypocrital are you people? Pathetic.
edit on 17-3-2018 by Swills because: (no reason given)

Martial law was declared by the mayor who used the police to enforce curfews and control looting.

So you're saying you want an Emperor Trump?

His online supporters literally call him that, along with God and Daddy. Sick, I know.

If the recent years are any indication, then I think it's too late to do anything about the Marxist movement that has consumed the country.

The people that would adhere to total government control and an eradication of the Constitution and Bill of Rights has reached a threshold that simply, can't be reversed.


Look at the outcry over tax breaks!

Look at the acceptance to silencing free expression as they destroy statues.

Look at how they deliberately want to ban firearms.

Look at how they want open borders.

Those outcry's are from the same ones who can't believe Hillary lost to that DJT guy from TV. Economists were happy with a lot of it, but Marxists were not.

posted on Mar, 17 2018 @ 05:23 PM
link
a reply to: JBurns
You sound like a triggered little girl. Well that won’t happen as much as your cold black heart wants. The left isn’t out to get you dude but man you sure want the right to get the left. You are playing into the extreme narratives that they want. Get smart

I may be safely considered as being more than slightly to the right.

I'm certainly not in favor of this, or will the vast majority of "the right" be for something as stupid as this. Some? Yeah, obviously. Most? Not even remotely.

originally posted by: kaylaluv
Calling forth the militia? You guys must be very excited at the chance to finally be able to use all yer guns!! Yah hoo!!!!

Ironic, isn't it? The supposed "patriots" can't wait to use their guns on other Americans.

For years they claimed it was Democrats & the Left who wanted to declare martial law and force all of its opponents into FEMA camps. They even claimed they wanted their guns to protect themselves from a tyrannical govt. Yet look who's calling for martial law...

Dude in the OP's even talking about purges and holding all domestic enemies in internment camps. It should be surprising, but I'm not surprised at all. After all, many of them proudly wave the flag of a hostile nation that declared war on the US and killed hundreds of thousands of Americans in only 4 years. They still haven't let that go and it's been more than 150 years. So I guess it's no surprise that they'd want to throw out the US Constitution & our constitutional right of due process; purge our government w/the people they disagree with; and have internment camps full of American citizens. People like this don't love America; they're the ones who are trying to overthrow America and what it's supposed to stand for.

posted on Mar, 17 2018 @ 06:16 PM
link
a reply to: JBurns
It's posts like this that allow me to understand how Hitler managed to hornswaggle the German people.

This is exactly how they have successfully shifted the narrative—created and controlled the propaganda—for their own gain and power.

It's not an outlier, it's systematic.

It's information warfare. And it is working.

originally posted by: JohnnyCanuck
a reply to: JBurns
It's posts like this that allow me to understand how Hitler managed to hornswaggle the German people.

And videos like this:
Never forget that they were marching at a "Unite the Right" rally with literal Neo-Nazis in defense of confederate statues. And right on ATS there were an enormous amount of threads that seemed like flat out supporters or apologists for that crap.

Though to be fair, a lot of people on the right aren't like this. But once people start talking about purges and internment camps, a line needs to be drawn.

Please tell me that you aren't of the mind that the OP's opinion, and a small handful of others in this thread, are representative of the majority of those of us who swing to the right.

Some of them, sure, I'll buy that they think that, given their constant over reaction to such nonsense as this thread, but I didn't think that of you.

originally posted by: Swills
a reply to: JBurns

How ironic. The Right is calling for martial law now that Trump is POTUS but when Obama was in office all you heard from the RIght was Doomporn predictions about Obama declaring Martial Law and taking all THE guns and locking people up in FEMA camps.


I was thinking the exact same thing.

A few lost freedoms is ok, as long as it’s to combat the deep state....

Did you read my post above yours? I literally said:


Though to be fair, a lot of people on the right aren't like this. But once people start talking about purges and internment camps, a line needs to be drawn.

ETA: And as I type this, the OP has 19 stars and 22 flags. So I'm guessing this mindset might be a bit more widespread among the right than you think.
edit on 17-3-2018 by enlightenedservant because: (no reason given) 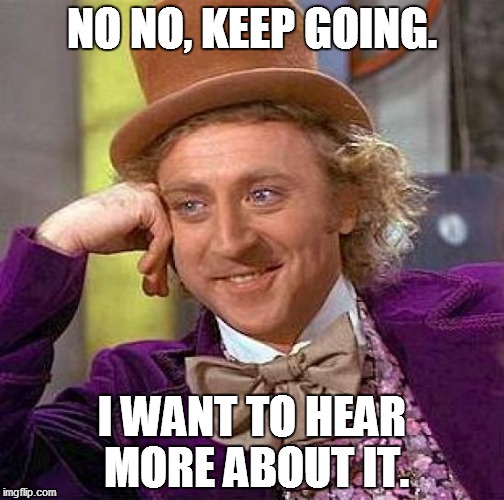 You're not actually buying Fox News saying that it's a nothing burger?

I saw that, after of course, I placed my foot squarely in my mouth. Should have known better. My apologies, sir.

As for how widespread this is...I honestly do not know. I can only go by what I see around me, in real life. I hang with a group of gun enthusiasts, who--with me being the sole exception--are also veterans of various wars, our last WWII veteran died a year ago, the rest are Korean, and Vietnam vintage--I'm the baby at 54. I'm also the most left of the bunch, which should tell you a lot. Not one of them would by into this nonsense any more than you would.

I've attended some of these gatherings here locally, the gubbmint is out to get us crowd, over the years. While they're a noisy lot, not to mention a little stupid, they're also quite small. The largest group I've ever seen was less than twenty.

I suppose elsewhere the groups could be larger, but as with the KKK, they're so infiltrated by the FBI and other LE groups, as to render them, shall we say, ineffective.

Martial law, in envisioned by the OP, is impossible. You, and others, are giving them far, far too much credit. Some groups, like the Order back in the 80's, are very dangerous...but they're also so fringe as to make fringe people cringe. But most are just blowing off steam, much like we do here on ATS, some of us on a daily basis.


I personally draw the line at internment camps, purges, mass starvation programs like the "Hunger Plan", etc. Even though I can accept some communist ideas, I always end up against actual communist governments and it's not because of any peer pressure or anyone else's opinions on them. It's because they always end up pushing for class based purges, mass internments, and other forms of collective punishment against the groups they believe have wronged them.

Maybe I'm naive but I truly believe that individuals should only be legally accountable for their own actions. Prove an individual has broken laws and that individual can get the legally determined punishment for their crime. Prove that each of their family members has committed crimes and then they can be punished according to law. But I don't see how anyone can claim to care about the constitution and then gleefully discard the 1st Amendment & 4th Amendment like the OP is suggesting.

Martial law, in envisioned by the OP, is impossible. You, and others, are giving them far, far too much credit. Some groups, like the Order back in the 80's, are very dangerous...but they're also so fringe as to make fringe people cringe. But most are just blowing off steam, much like we do here on ATS, some of us on a daily basis.

Let's take a look at the OP's plan and see how it would actually be implemented. The Trump administration would have to declare martial law, then purge/fire all left wingers currently in office, then lock up leftwingers across the nation, and then haul us all before tribunals (not courts, but tribunals). To make sure there's no misunderstanding, the OP even specifically brought up the Japanese internment camps from WW2 as an example of what he/she means.

Why should I assume people like this are simply blowing off steam? ETA: This "plan" would violate the constitutional rights of every person fired/"purged" by it as well as the constitutional rights of every person locked up and brought before a tribunal instead of a court of law.
edit on 17-3-2018 by enlightenedservant because: (no reason given)
edit on 17-3-2018 by enlightenedservant because: added to clarify

That very much depends upon what you mean by act. If it actually comes to a declaration of martial law? Hell, yes, we act. Maybe even before that, I'd say...

I'll fight something like that with every means at my disposal. That would, though hopefully not, include violence.

My fathers generation fought tyranny in lands across the globe. I'll be God damned if I'll be found wanting when/if the time comes.

The fringe, the ones who want this idiocy, would quickly find that they are, shall we say, out gunned.

Most are just blowing off steam, the ones who aren't, are generally too cowardly to act on the thoughts, for fear that folks like myself who are to the right politically, wouldn't help out.

Imagine, throwing a martial law, and no one came? Kinda embarrassing, I'd think.

They'd also find out, very quickly, that the guys with all the guns make all the rules. Overthrowing a Constitutional Republic, and replacing it with a military junta--which is what it would be, isn't conducive to everyone being equal before the law.

Fringe dwellers would be first up against the wall. Hope that they remember that.

Or a perceived enemy. Which is what every totalitarian regime wants. An enemy.

Of course, the likelihood of Trump doing something so outrageously stupid are on the order of slim to none. With none leading by a large margin.

But it is actually fairly funny that this refrain is constant from both fringes. Clinton was going to declare martial law. Bush was, actually both were. Obama was. Now one fringe wants him to, or some elements within it do...bit of a change, but pretty much the same tune.

It only needs to be perceived.

If Trump does it or not, time will tell, although I doubt it will be as extreme as the op has hoped for.

But, the op isn’t isolated in the support of totalitarianism, particularly on ATS, I’ve seen other members call for Trump to have his own social media platform, for example.

I suspect, if he goes down the path of battling this perceived threat, the media will be the first to get cracked down on.